Freddie Burns Exclusive: "I wouldn't say my Premiership career is over completely" 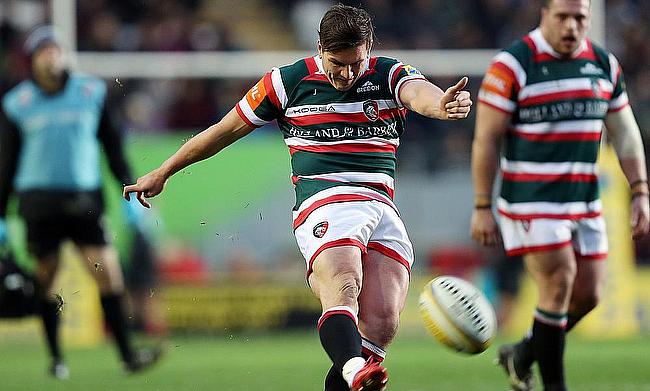 Despite the Covid-19 pandemic affecting the 2021 Top Challenge League season in Japan, TRU's Elizabeth Cartwright was able to chat to Freddie Burns about settling into life with the Shokki Shuttles.

EC: How is life in Japan? What is so different about playing out there compared to England?

FB: I'm really enjoying myself out here. They live a very different lifestyle in Japan, but I've been made to feel very welcome. I came here to push myself out of my comfort zone and try something new.

It's only a one-year contract so I've just tried to jump in with both feet, see what happens and go from there. Covid is on the rise over here though so it's just a waiting game really.

EC: What is your motivation for being in Japan?

FB: Without getting my little violin out and playing it, the way things ended at Leicester was pretty s**t. The same thing happened at Bath, and I was fed up of being messed around and disrespected.

A week into self isolating (as I’m deemed a close contact) alone in my apartment in Japan... a week to go...

EC: How hard has it been to adjust to your new life in Japan? I know you're very close to your family. What's it been like, particularly going over on your own and through a pandemic?

FB: It hasn't been too bad. Of course, I miss home but the way things ended at Bath, it was a welcome change and the home sickness hasn't really kicked in yet. Maybe it's because I'm so busy learning. It's a new life experience for me and I've grown so much as a person. Before the pandemic hit the country badly, I saw bits of Japan.

Hopefully, by the time the season has finished here, I'll still have a few weeks to be able to explore Tokyo as there's still lots I'd like to see. It's not how I expected life to be, but that's how everyone in the whole world feels at the minute, and I count my lucky stars that I'm earning a living and playing in a country as cool as Japan. I still feel very lucky despite the circumstances.

EC: Is the training in Japan as intense as at Premiership level?

FB: It's a different dynamic. You have to train incredibly hard over here. Considering there are only 15 professionals in the squad, it's mental! The rest go to training in the morning, then go to work in a factory or an office and then come back in the evening.

The coaches at Shuttles are all Japanese too. There are no foreign coaches. It's bonkers. They are bred on hard work. Not that you'd cut corners, but nowadays, the way the foreign coaches (especially England coaches), they know the value of tailling down for a big performance at the weekend whereas, when I played a pre-season game about three weeks ago, it was mental.

It was only a training game, but it was a full 80 minutes. We kicked off at 11:30am, we trained that afternoon at about 4pm and I managed to run 7km the night before a game as well! I was cooked!

Up until the age of about 26, I could eat whatever I wanted and be the skinny one on the pitch! I was the light one, but every year since, an extra 2kg would appear! I'm not in terrible condition, but I am trying! I've found here that with every meal, you get a big bucket of rice. There are not too many greens around here!

Seriously, I am trying to use this opportunity to get fitter just in case I do return to the Premiership. I'm not going to use this time to let my foot off the gas.

EC: Many people that follow you will know about your career at Leicester Tigers. Do you still follow them closely or the Premiership itself? Leicester are playing well so far this season.

FB: I do, yeah. I'll be honest with you and say I do miss it. To deviate from your question a little bit, the Shokki Shuttles are not a top team so I'm not sure if it differs from the top clubs and England. Rugby is a business and they try to make a profit. That's why you see TV revenues, desperate to get games on and not cancelling them unless they really have to etc.

Whereas over here, I play for Toyota and where Shuttles rank under Toyota as an industry, there's a corporation so you're kind of like an accessory to the company they want. So if Toyota decides next year, they don't want a rugby team, then Shuttles won't happen anymore. It's a different dynamic.

When you play in the Premiership, you know about the relegation battle, needing to get into the top six to compete for the Champions Cup and needing to get into the top four to play a semi. It brought so much pressure that I loved but what I didn't actually realise until I came over here. That said, I'm not saying it's a completely pressure-free environment over here, but it's not the same and a very different dynamic.

I still keep in touch with the Premiership and stream the Channel 5 highlights so Wednesday afternoon after training, I like to get home and that's my hour to sit and watch the games. It's a great competition and I spent 11 years in it. Who knows if I'll come back? I'm still only 30 and wouldn't say my Premiership career is over completely. That's the beauty of it and I'm only here a year so if something comes up in the Premiership, I feel it excites me, is a worthwhile cause and something I can contribute to, then I'm more than happy to give it a crack.

EC: How much do you miss the interaction with fans? Are the Japanese just as passionate as the English?

FB: I don't know yet because we've only had training sessions and they've been behind closed doors. One of the most special things for me, though, is the supporters. I've been very fortunate enough to have a great relationship with fans over the years in the Premiership. It was the one thing that was really tough to walk away from. That's what makes the Premiership so great.

I miss playing in front of thousands like at Franklin's Gardens when you're playing in a huge derby and it's do or die. I was very fortunate at the beginning of my career to play for Gloucester and Leicester. No disrespect to them but they're two working-class cities. I was well aware people worked incredibly hard Monday to Friday in order to have money to buy a ticket to watch the boys play on a Saturday.

Even when games didn't go our way and we didn't play particularly well, it was important always to show pride in the shirt. I used to sneak into the terrace at Bath. I know what it's like to be a supporter and wanting your team to play well. It's always good to be committed. That's put me in good stead I feel as well. I've had some terrible performances for every club I've played for, but fans have been accepting of my mistakes and hopefully they could see they'd been made through commitment, rather than shying away.

EC: Finally Freddie, a big topic over here is concussion. What's the take in Japan? Is the care you've experienced here been different to there?

FB: It's difficult to say because of the lack of games we've played, but it's been very good so far. I've always had a rule that I'm only in the physio room if I'm injured so I don't tend to spend any time in there unless I have to. Touch wood so far, I haven't been injured enough to be in there!

In terms of concussion, I think there's new a World Rugby concussion protocol which is so important. In my last year at Leicester, I suffered a few concussions and had a three month stand down. Then when I went to Bath, I spent my first pre-season with them doing non-contact training.

To be honest, it's tough. You see former players like Steve Thompson sharing their stories which is scary and upsetting but at the same time, every club I've played at it's hard to know where to point the finger. We all sign up to the sport knowing what the sport entails and all I can say is the clubs I've been at, I've been treated exceptionally well and I wouldn't expect anything else. Personally, I have no real complaints.