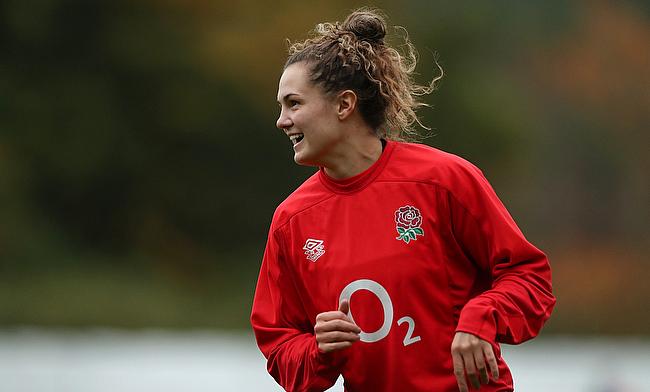 TRU’s Elizabeth Cartwright chatted to Ellie Kildunne to find out a little bit more about the Red Roses full-back ahead of England's clash with France this weekend.

What's the mood been like in camp this week especially after winning the Grand Slam recently?

EK: It's been great. Everybody is in high spirits; the girls are in a fantastic mood and trained well. There seems to be a bit of a buzz around the squad which is always great knowing there's a big game against the French this weekend.

When did you first pick up a rugby ball? Where did your career begin and have you always played at full-back?

EK: I started playing when I was five years old for a boy’s club. I actually first started playing rugby league up in Yorkshire. I then ended up playing both codes and moved to Hartpury College when I finished my A-Levels and whilst I was there, I played a season for Gloucester.

I played well and during that season, I picked up a fair few caps for England. Up until that point, I played on the wing and at 13 a bit for the age groups. It wasn't until I got the call up to say England wanted me in their team that I moved to full back. Danielle Waterman mentored me and I learnt all the tricks of the trade-off her. I played at full-back for Gloucester and for the Red Roses before going to play 7s.

Growing up, did you always want to be a professional rugby player? When did you think it could become a career?

EK: No actually. I remember at primary school we had to write down what we wanted to be when we grew up and I said I wanted to be a football player. I realised I wanted to be a rugby player though when I went to the Sainsbury's School Games when I was 15. It was a multi-skills tournament and it was playing Rugby 7s which I really loved. It was an environment that I really latched on to and at that moment, I realised it was what I wanted to do for a living. It was then I started to take rugby more seriously and joined Hartpury.

You're Grand Slam Champions and back to back Six Nations winners. How exciting is it to be a part of this squad and what does the future look like for women's rugby going forward?

EK: It was amazing to be given the opportunity to be a part of the squad. Huge credit goes to them becoming winners before playing Italy. It hasn't been done since 2010 so it's a massive achievement that everyone can be proud of. In terms of where women's rugby is at, it's been broadcast to more people so therefore more people want to watch it. Slowly but surely, it's going in the right direction and I think that's massively to do with the level we're playing at now and the coaching we're being given. People want to watch good rugby and if you're not playing that, people will become less interested.

You transitioned from 15s to 7s in the summer of 2018. I know you had some rotten luck with injuries but why did you make the decision to leave 15s to play 7s? What did you find most challenging and what did you enjoy most?

EK: I made the decision for two reasons. Firstly, I wanted to improve my skills and I wanted to be put in a position where I was going to be put under pressure. 7s is insanely fast and you have to remain focused because if you make a mistake, the other team is going to score.

We need to get our hands on this selfie! ????#WomensSixNations #GrandSlam #EnglandRugby pic.twitter.com/udgZaj4CnB

You have to work at it and that was a massive drive for me. The second reason was because it would obviously be a massive dream to be part of the Olympics and with it only being a couple of years away at that point, I thought it was the best time to achieve something. Ultimately, I want to be the best player in the world and I wanted to put myself in an uncomfortable position and feel challenged.

The injuries I suffered were hard to deal with at the time and I suffered a lot because my body wasn't used to the step up from being an age group player to a 7s one. My body wasn't strong enough so that's why I picked up the injuries I did. That was probably the hardest thing to deal with because although I had my dream job, I had to actually sit on the sideline for the majority of it but it was also a massive positive because it's allowed me to grow as a player.

Like some of the other Red Roses in the squad, you've got quite a big decision to make over the coming months. What is the plan for you going forward as a player? Are you going to try and compete at Tokyo next year or knuckle down at 15s, make a name for yourself at Wasps and aim to play in the Rugby World Cup next year?

EK: Both are huge opportunities but right now, I have to work on my basic skills and the more games I play in, the better I will become as a player. Hopefully, I will then have some involvement in either in the future but at the moment, we've got a massive game at the weekend and I need to focus on that and prepare as well as I can.

What's been your favourite memory as a player so far?

EK: My favourite memory is when we qualified for the Olympics. We didn't make the top four in the World Series so we had to become first in Europe. The French were incredibly strong and were beating us all year.

We lost quite a few times against Russia too. We came sixth and thought we had no chance but went to Russia, all pulled together and ended up winning the final. I've never been in an environment with that much love and good energy but that's what it felt like to be part of a great team. We were on the bench crying in the final and it was really special. It's a moment I hold so close to my heart. I wouldn't be able to explain that feeling to anyone other than if you were there yourself.