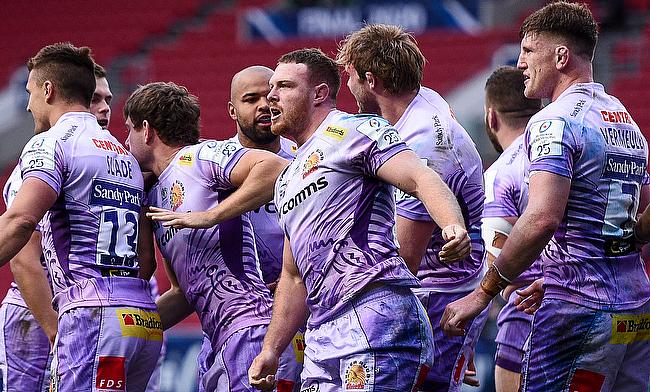 England’s industrial performances during the Autumn Nations Cup have allowed Eddie Jones’ side to rack up three successive wins and in truth, they have rarely been troubled.

Against Georgia, Ireland and Wales, there were clear signs that last year’s World Cup finalists are slowly remoulding themselves into a seriously difficult team to beat as their defensive efforts continue to shine through.

Maro Itoje has been a standout performer for England throughout this autumn window, but the displays of Tom Curry, Sam Underhill and Billy Vunipola have certainly not gone unnoticed.

With Exeter’s Sam Simmonds lighting up the Gallagher Premiership, there have been calls to separate England’s established back-row trio, but the ‘Duracell Bunnies’ - along with Vunipola - have hardly put a foot wrong.

Nevertheless, Jones has given a glimpse of what the future may look like with both Jack Willis and Ben Earl earning opportunities this autumn and TRU’s Elizabeth Cartwright has assessed the chances of some of the back-row candidates waiting in the wings.

Let’s begin with someone who has already caught the eye. At only 23-years-old, the back rower has been immense for Wasps and deservedly won his first cap for England against Georgia in the opening round of the Autumn Nations Cup.

His work at the breakdown is formidable and his athleticism is sublime. Last season, he won 44 turnovers for Wasps which was one more turnover than all of the Exeter Chiefs squad put together.

Put on this earth to win turnover ball ??#GallagherPremFinal pic.twitter.com/SYEif3c9EX

The ‘Turnover King’ had another formidable performance off the bench against Wales and despite the horrendous injury he suffered before last year's Rugby World Cup, he’s not let it impact his performance.

Willis is speedy, stupendous and scintillating in defence.  The flanker has got the potential to be one of England’s greatest. Against Wales, he replaced Curry on the 60th minute and immediately made an impact off the bench. In dying minutes of the game, Willis forced a turnover, and Owen Farrell nailed another three pointers. He matches Curry's physicality in defence but he is capable of delivering match-winning ball, whether that's in defence or attack.#

The reason why turnover ball is so valuable – and why it is defended in the breakdown danger zone – is because it tears apart defences. If the attacking side loses the ball after applying sustained pressure, they suddenly become vulnerable. They then have players out of position, and when Willis attempts to nick the ball, they are exposed.

Willis also offers unpredictability in big games and his flexibility is a big advantage as it allows him time to cling on to the opposition. His ability to move so quickly with ball in hand also makes him a worthy contender for a starting spot in Eddie' team.

With over 50 appearances in a Harlequins jersey, Alex Dombrandt has been phenomenal in previous seasons and continued to impress in Harlequins win against the Northampton Saints on Saturday.

England fans will remember Dombrandt for his stunning performance in the Quilter Cup game against the Baa-Baa’s at Twickenham. Making a first outing for the England XV side, he crossed the whitewash twice in a man of the match performance where his powerful ball carrying and quick hands were on show. For someone of his calibre, he is so nippy and explosive when he comes on as a replacement for Quins, which could be an extra string to his bow for England.

He’s a skilful player who is unpredictable in attack. He's got some huge competition if he's to be competing against Billy Vunipola., however, Dombrandt has the edge over the Saracens man when it comes to running big lines and he does offer a stronger offloading game when on a rampaging run.

What Dombrandt has been told, though, is that his defence needs to be better. This is why many think Eddie hasn't picked him to play in the Autumn Nations Cup. It needs to improve if he's going to impress on the big stage. Jones could play Curry at 6, Willis at 7 and Dombrandt at No 8 as all three players offer something exciting and different.

Sam Underhill could then be a finisher or vice versa as the squad needs to rotate and Eddie needs to allow other young players to be given game time. People also have to remember that Vunipola isn't playing any club rugby so some may argue he doesn't deserve a starting spot when he's not playing week in week out for Saracens, despite him being a quality ball carrier.

Mercer has already earned over 70 caps for Bath despite only turning 23 in the summer. The former England U20's star can play at both blindside and No.8 and is an incredibly physical player who always puts his body on the line, but also has the pace to outrun international wingers on a regular basis.

Since picking up an injury last season, the backrower hasn't been in contention for Eddie's squad so far this season, however, he's a very well-rounded player who's certain to step up to the occasion if Jones comes calling.

At the age of just 21, Worcester Warriors Head Coach, Alan Solomons made no mistake in electing 'Big Ted' as captain for the 2020/21 season.

The young but powerful forward has been described as 'intelligent and articulate' by his club boss and Jones has already had him training for England as an apprentice in recent weeks.

I heard from @WorcsWarriors Alan Solomons about his men in the England camp, @Ted_Hill26 and @OLawrence1.

It was great to get an inside track from the man that knows them best ahead of the Autumn Nations Cup.

His immense physical stature is what makes him unique and at 6ft 5in and nearly 18st, he's known for regularly driving his opposite number backwards in scrums and at such speed.

With the ball-in-hand, he has the confidence to offer himself up for the collisions and doesn't shy away from the opposition no matter who they are. His offloading game is also pretty spectacular and the gifted back-rower is sure to be on Eddie's radar with the next World Cup slowly edging into view.

The best till last? Time and time again, Exeter Chiefs fans are baffled as to why the 2020 European Player of the Year hasn't been able to add to the seven England caps he won two years ago.

He finished as top try-scorer in the Champions Cup last season and has continued to impress the rugby world with his performances at No 8.

Simmonds bagged two more tries at the weekend to add to his hat-trick in the Chiefs' previous match and showed Eddie that he's not slowing down anytime soon.

His incredible footwork and the ability to outpace international wingers for fun is what makes him so special and exhilarating to watch. Whether he's scoring from far out or close range at scrum time, it's all the same to him and he's a player that provides more or less the full package to everyone but Eddie. What more does he need to do? Only himself and Eddie can answer that question.

These are just some of the players Jones could consider playing for England and who are exciting prospects going forward.

However, England fans should not forget about the injured Courtney Lawes who was in fine form at the beginning of the Six Nations before suffering a knee injury which has kept him out of contention and the also talented Lewis Ludlam who displayed some quality performances earlier this year too.

Eddie is always on the lookout for new players and experimenting with new partnerships ahead of the 2023 World Cup in France. Whoever he picks, England have an incredibly talented range of back row players to choose from.