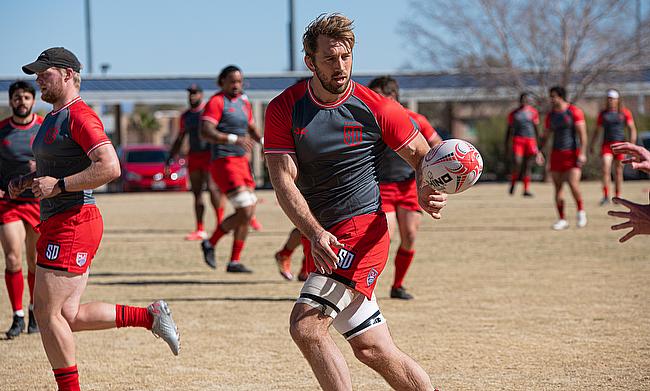 In her latest Q&A session for Talking Rugby Union, Elizabeth Cartwright speaks to Chris Robshaw about his move over to America and playing in Major League Rugby.

How is America? Do you feel fully settled there now?

CR: It's definitely been a good experience for me so far. Americans are very friendly, open and honest. Unfortunately though, we have a lot of injuries at the club at the moment. It's not like in the UK where you probably have 40 - 50 players. We only have about 30 so it is definitely a struggle.

Off the pitch, everyone has made my wife and I feel incredibly welcome but in terms of on the field, it's not the start I hoped for after injuring myself in the first game but mentally, it's been good. Mentally, I feel fresh. I feel sharp.

The first couple of months were quite unsettling. Moving around in these unprecedented times was hard and trying to get set up was tricky as you can imagine.

Now we're back in San Diego though, it's sunny generally every day, we do our recovery at the beach and we have a great training facility here which is good.

I'm hoping to be back playing soon. I dislocated my shoulder unfortunately but an operation wasn't required which was the best possible outcome.

Did you always want to play rugby abroad?

CR: I don't know if I always wanted to play rugby abroad. I always wanted to play for England so therefore had to be playing in England. Unfortunately when that door closed, I asked myself what else is there for me? I spoke to so many friends, whether that be in a rugby capacity or friends who have lived abroad, and they said they absolutely loved it. For me personally, I wanted to have that experience and there was a fantastic opportunity for me to play for the Legion.

How hard has it been moving to somewhere so different particularly in these circumstances? Do you miss home or have you had a big enough distraction?

CR: It has been hard and of course, I miss friends and my family. When I see people put up pictures of where I used to live and all that kind of stuff or seeing pictures of people down at the Stoop, of course you miss all that.

I think from our point of view though, when we left, we were under a very strict lockdown whereas when we got over here, especially in Las Vegas, it was like they didn't know what Covid was apart from wearing a mask. You could go to restaurants, you could go to bars. As long as you were keeping your distance, a lot of things were open. We didn't realise just how much there was to do in Las Vegas. We went hiking, walking, it was sunny every day and we could go for a coffee. It was amazing. There's a lot more space here than back home too.

Do you hope to return to the UK this year for a break after the season has finished?

CR:  I probably expect to go home in mid-August and I will be back home until the end of December.

Can you see yourself returning to the Premiership in the future or do you wish to retire in America?

CR: For me, it was very much about having a fresh challenge. I've been to Leicester, Sale and Bath etc, but it was the right time to move on. I think as a player you tend to know when that is. It's a weird feeling, but you know it yourself. Like I said, I haven't played as much as I would have liked but I've got a couple of years over here to play a little bit more.

Do you still follow the Premiership and what did you think of the Lions squad? Any surprises?

CR: Yeah, I follow Quins. I'll always follow them because I used to play for them. They're flying at the moment and playing so well. I follow the England games too, but I probably don't know too much about the other teams in the Premiership and how they're getting on.

I'll always have an interest in it and my family will return to the Stoop as they love it down there. Hopefully when I'm back in the winter months, I can get down to Twickenham and see the guys perform.

Playing over here, there are fans but they don't have the biggest crowds. They have about 2,000-3,000. You miss that buzz on game day but I'm looking forward to seeing them back.

In terms of the Lions tour, I think it's what people expected. I did feel a bit for Kyle Sinckler. I think he should have been in it. I think he did an incredible interview the game after. It was very emotional. I've been in that situation where you haven't quite made it. You can be on such a high or the biggest low if you haven't made it.

Just on the stadiums then, what are they like in America? Some look massive!

What are your goals for the rest of the season once you've returned from injury?

CR: Yeah, firstly it's to get back playing and as a team, we are working hard still. I just want to be back fit and playing again as soon as possible because that's what I love most.

What is your proudest moment to date so far as a player? Do you ever have time to reflect and pinch yourself and how do you switch off?

CR: Captaining my country was amazing. It's hard to top that. I was so fortunate to lead the guys out and the amount of times I did that was absolutely incredible. I loved that at that moment in time. Of course, you do take moments to look back and take stock, but I think for me, one of the things I always miss is running out in front of 80,000 people as that is so special.

The buzz around you, the electricity and sound, the intensity etc, that's what I do miss. I don't miss waking up to training sore and achy, but if you could bottle the feeling of running out to packed crowds, that would be incredible.

In terms of switching off, I have a little dog. It's the little things like being able to take them for a walk is enough to de-stress. I've also always loved the ocean. It's a massive escape for me and relaxation. After training a couple of times a week, I will come down to the beach. My wife Camilla and I have a couple of chairs. We will often sit there and then go for a swim. It's so close, it's 5 minutes away and you can pop down for an hour. There's so much sand. It's quite nice.

I've also been learning how to surf. It's a new hobby of mine! Before we went to Las Vegas, we bought a surfboard. I tell you what those guys are fit! (We laugh). The first day, I didn't even make it through the waves. I just kept getting battered. It was like I was in a washing machine or playing against the South Africans three times in a row! Unfortunately with my shoulder, I haven't been able to get back on the board as much but hopefully I will soon.