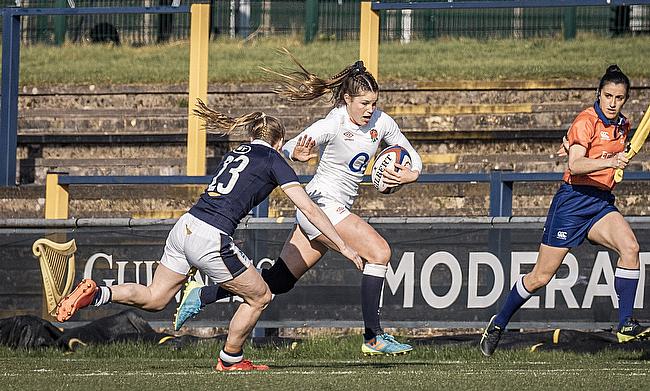 Picture perfect: Blast from the past can set Wales on road to a bright future
Why the ‘Phenomenal’ Allianz Premier 15s needs visibility
Vicky Fleetwood Exclusive: Global competition can create a brighter future for players
World Rugby launches global tournament for women's competition

Following the Red Roses' Six Nations victory over Scotland, TRU's Elizabeth Cartwright spoke to Jess Breach about her career so far and life off the pitch.

Elizabeth Cartwright: Growing up, did you always want to be a professional rugby player or did you have other career aspirations? When I speak to players in the men's Premiership, they often tell me it was their dream to be a rugby player from a very young age. Was it different for you as a young girl growing up because it wasn't professional back then?

However, I think if I didn't play rugby and I could dedicate my time to something else, maybe I'd like to be a paediatric nurse. To be honest, I enjoyed sport that much, I didn't really think about what I wanted to do in the future and I just really enjoyed my childhood and had fun.

EC: After your playing career has finished, do you know what you'd like to do?

JB: I'm currently doing a degree in sports communication and marketing and I want to go into the female side of sport and explore that sector.

EC: Who inspired you to pick up a rugby ball? Where did your playing career begin?

JB: My dad and brother used to play at my local rugby club which is Chichester Rugby Club. I used to go and watch my dad on a Saturday play for the first team. My brother would then train on a Sunday and I'd be the annoying sister who would tag along and try and join in.

Then I joined my own team when I was old enough and I've been playing ever since. I was six or seven when I first picked up a rugby ball. I loved it and when I was growing up, I had the mindset that anything my brother I did, I could do it too so never did I think that being a girl could stop me from doing anything. My parents were also very supportive of me and I did everything my brother did, apart from Golf as I find it so boring! We never had that stereo typical barrier.

EC: Have you faced any setbacks growing up and have you had to overcome any challenges to get to where you are today?

JB: Not really. I think you get to a point where you ask yourself 'is this really what I want to do?' Because it can get really tough. I think that came to me quite early. Then I thought I could overcome the challenge and knew it was definitely what I wanted to do. Other than that, not really.

Obviously injuries are a part of it but I've not really questioned them. Last year, I did have to question what came first; family or rugby but I think it gives you a different view of life. Yes I'm passionate about rugby and yes I want to do it for as long as I can professionally but actually the value of other things are as important and I think sometimes we forget that but when we look at the real world, we realise what does matter.

EC: Did you do a lot of reflecting in lockdown then?

JB: Yeah, I went home last year and about this time last year, I was in a boot because I hurt my ankle. That was quite tough for me, especially going into lockdown and having quite a serious injury, wondering if I needed surgery or not. That was quite challenging actually.

JESS EXPRESS! Breach with a brilliant finish down the wing for @EnglandRugby's fifth! #WomensSixNations pic.twitter.com/t5zHpVvhwl

To be with my Mum and Dad was something very special and I don't think I'll ever forget that period. Yes, the Coronavirus is a horrible thing and it had a bad effect on a lot of people but for me personally, it's actually been a nice time and I spent a long time with my Mum and Dad. Being back by the sea, I missed it a lot and I don't think I appreciated just how lovely it was where I lived and how much I enjoyed it as much as I could until now. When I can, I try and go back there as much as I can because it's wonderful.

They live about an hour and a half away which isn't too far but it's far enough if I've had a day of training and have to ask myself, do I want to travel that far? When I then do get there though, it's so rewarding. Even if it's just for two hours and you can have fish and chips on the beach, it's so special. It was lovely to have that family time.

The virus could have made or broken a lot of things, even rugby. I could have enjoyed the time I spent with them that much that I could have stopped playing rugby but I didn't and I stuck with it. I enjoyed coming back and even my relationship with my boyfriend Archie (White – who plays for Harlequins) could have gone two ways, we isolated together when bubbles were introduced last year, but it made us stronger and I think the dedication we have in rugby as players can reflect a lot of other things such as a relationship, friendships, uni work etcetera. You want to get things done and you have to live to a lot of time restrictions. When you get used to that, it kind of takes over your life.

EC: Do you see yourself as a role model now, with the way the women's game is growing? Who was your role model growing up if you had one?

JB: I think it's odd when people ask me this question but I think I am, yes.

EC: Why do you think it's odd?

JB: Not odd, let me rephrase but when I think of role models, I think of people like Michelle Obama, Serena Williams who are big stars. However, I think we are big names to young children growing up and we are inspiring the next generation. I love being a role model.

There's this one young girl who plays at my old rugby club and she's amazing and so tiny. I often think 'I can't ever remember being that small and wanting to play'. She definitely inspires me. I know that may sound a bit weird but her coming to the games, wanting photos and cheering us on is amazing. I think we definitely have a better connection as female players after games, we love it and that's what we do it for.

EC: How much are you loving your rugby at the moment? You've been playing so well for Harlequins recently and you seem to score tries just for fun?!

JB: At the beginning of the season, it was quite a challenge for Quins as I think we were quite forward dominated. I think I was struggling and asking myself where do I fit into this team as I couldn't use my assets but actually towards the second half of this season, we've maybe lost some forwards due to injury but it's actually made us become better as a collective squad and become unified.

I'm really enjoying my rugby at the moment and when I enjoy my rugby, I play at my best. I think that's important and that's a message to anyone really, if you enjoy it, you'll play at your best and if the people around you are enjoying it, they're going to be beneficial to you.

EC: What has been your proudest moment in your career so far for Harlequins and the Red Roses?

JB: At Quins, I think I'd have to say, the Big Game. I think it's quite a historical event now and I hope we'll be able to play it again this year (restrictions permitted). It was amazing for Harlequins to put it on, the team we played were awesome, the atmosphere was brilliant and the amount of people that were there and stayed was just phenomenal.

I think that game will stay long in my memory as some of the girls may never have thought they'd have got to play at Twickenham but now they can say they did, which I think is amazing.

For the Red Roses, I think the first Grand Slam we won in 2019 where we won it at Twickenham against Scotland. Me, Zo (Zoe Harrison) and Beckett (Sarah Beckett) won it together and it was such a special moment as they're two of my best friends so to actually win it with them was pretty amazing.

Zoe and I have known each other for a very long time, more or less ten years. So to know that we started the journey, moving up the age groups together and now be here together as professionals, I think is pretty special. All our families were there.

EC: What about your debut?! That was rather spectacular!

JB: (Laughter) Oh yeah I always forget about that! I think because I was so young, I don't think I realised just how special it was. I was in a bubble and I didn't realise quite what was going on! Suddenly people were becoming interested in me and my followers were going up on social media, it was mad.

When the game finished, Zoe and I went back to our rooms and at the time, my ex-boyfriend kept asking why I hadn't replied to any of his messages and it was because I was bombarded with so many messages! I don't think I replied to him until about two days later! It's a good job it didn't work out with him (we laugh).

I gained so many followers on Instagram and Zoe asked was my phone going to stop! Friends from school thought it was mad. I went from having something like 500 followers to 5,000 in the space of a few hours! Then everyone started to say I was an influencer and I really wasn't (more laughing).