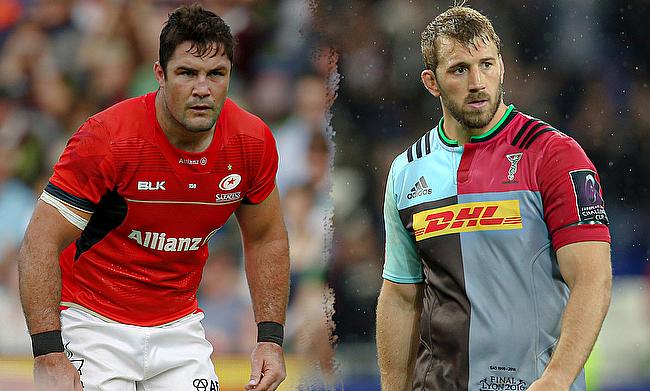 With Harlequins and Saracens unable to qualify for the Premiership play-offs, this weekend marks the end of two storied careers in English club rugby.

Both Chris Robshaw and Brad Barritt have had massive influences on the clubs they represent. The latter is unable to cap off his time at Saracens against Bath due to the concussion he suffered in his 262nd game for the club against Racing 92 in the Champions Cup semi-final last weekend.

Arriving at Sarries as a 22-year-old, the centre has since gone on to represent England at a Rugby World Cup and he also featured on a British & Irish Lions tour in 2013. Not only this, but Barritt has lifted nine trophies with the club, leading them as captain for many years.

Heading back to his native South Africa in the coming weeks, Barritt says that his last win in a black jersey against Leinster felt as good as any other, even if he would have liked one more game with his teammates.

“I would have loved to have had one final run out with the team, especially at home,” Barritt said. “Particularly that feeling that was generated after that Leinster away game, it felt as good as a Champions Cup victory or any Premiership Final victory that I have ever felt.

"To feel that feeling again for a last time made the extra few months completely worthwhile and I think the whole team has spoken about harnessing that same sort of feeling as the club build into the future.”

There is no doubt that Barritt would have wanted to end his time with Saracens with yet another European crown. Losing late on to Racing 92 in Paris, it was in that game that the club legend suffered a knock to the head, meaning he will not be able to represent his side for one last time.

Relegated due to their salary cap infringements, their time in the Premiership comes to an end against top four hopefuls Bath on Sunday. After over a decade with Saracens, Barritt understandably says that he will miss the culture that he, and others, have developed.

“The brotherhood of the players I have played with, over a 10, 12 year period has been special,” Barritt said. “The friendships with coaches, the staff, the people that make the club is unique. The people go out of their way every day to make sure that the players are in the best position to play a fixture. The true testament of any organisation is the people within it. It is the people I will miss.”

Across London, Chris Robshaw will be ending his club career with Harlequins by making his 300th appearance before the former England captain heads to San Diego to play in Major League Rugby.

Playing his final game at the Stoop on Monday night against Wasps, Robshaw says that it was hard not to share his departure with the fans who have cheered him on since he was a teenager.

“Before the game and post-game, I was almost being led around,” Robshaw said. “It was almost like I was walking to my death. They were asking what my memories were and all that sort of stuff. It was devastating not to have the opportunity to share Monday with the fans.

The flanker will be finishing his Quins career at Welford Road, playing Leicester Tigers for one final time. In contrast to Barritt, Robshaw’s list of honours is somewhat shorter. Starting his career in National One (now the Championship), his sole Premiership title win was the culmination of many years of hurt and hard work.

It came three years after the Bloodgate scandal, where the club used fake blood capsules to allow Nick Evans - who had previously been substituted - to return to the field. As a result, Quins were dragged through the mud and their Director of Rugby, Dean Richards, was banned from rugby for 36 months.

So, when they won the Premiership in 2012 against Leicester at Twickenham, it was naturally a huge moment for the side and one of the memories which Robshaw treasures.

“The whole 2012 experience, unfortunately it feels a lifetime ago and I have been trying to help the club get back there and unfortunately I haven’t managed to do that,” Robshaw said. “It was the whole experience. We were sponsored by Etihad, so the week before, we went over to Abu Dhabi. It was so hot that we couldn’t train past 10 o’clock in the morning.

“So, we were on boat trips, playing golf, having barbeques. It was all great fun. In all seriousness, it allowed us to get away from the pressure of a first final. The walk across (from the Stoop to Twickenham), everyone’s friends and family were there, you could spot them as you went in.

“Of course, the game was incredible. Our record, pre that game against Leicester, was terrible. I think we had maybe won five, 10 percent of games against them so to go there and do that, we had to do something special."

Neither of these two players have been able to bow out from the game in the way in which they deserve. Both Robshaw and Barritt have been true servants to their clubs and will no doubt have success in the next step of their careers.