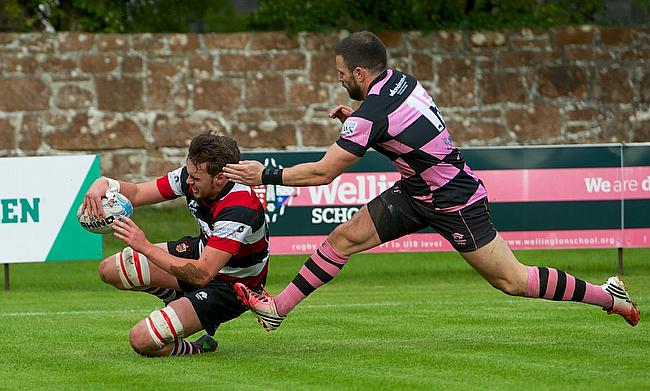 McMichael ready to roar when rugby returns
From off drives to offloads: The rise of Scottish centre Robbie McCallum
Rising star Winning is ready to push on
Spencer loving life at Jersey and looking forward to an exciting 2020

When up-and-coming Scottish rugby talent Ross Bundy made his senior debut for Stirling County when he was still at school, his opposite man was a professional player with a hard-hitting reputation.

As a 17-year-old, a wet behind the ears Bundy was thrown in at the deep end off the bench in the second-row for a Premiership clash at Bridgehaugh against Melrose in March 2017.

On the day, the visitors had the use of Namibian born enforcer Anton Bresler - then of Edinburgh Rugby, now with Worcester Warriors - through the pro draft system.

“I ended up lining up against him in the lineouts and such like and that was quite an eye opener for a teenager who was used to playing under-18s rugby,” Bundy, who has signed for French outfit RC Narbonne ahead of 2020/21, told TRU.

“I was weighing about 90kgs at the time while he was around 120kgs, but I got stuck in as best I could and loved the experience of playing against him and some other good players in the Melrose side.

Well done and good luck to the Stirling County players named in the squad for the Scotland Under 20s for the forthcoming 6 Nations Murphy Walker, Cameron Henderson, Grant Hughes and Ross Bundy ???????????????????? https://t.co/6InJsJtMAV

“They beat us quite comfortably [30-7], but it gave me a taste for things and showed me where I needed to improve if I wanted to play senior rugby regularly.

“Fast forward three and a bit years and I have now decided to head to France and join RC Narbonne.

“It is a big step out of my comfort zone, but I feel at this stage of my career it is a move that will test me and make me better and I look forward to getting over there when the current [Covid-19] situation eases and playing for their under-23s and perhaps pushing for first team appearances.”

Ross’s journey from Tillicoultry to Darlington

Second-row/back-row man Bundy grew up in the Clackmannanshire village of Tillicoultry and played his early rugby at Hillfoots, the club which has helped produce Scotland caps like Jamie Bhatti and Adam Ashe, before he moved to County and their youth set-up.

“I started to get more into my rugby at County and enjoyed playing in the youth teams and learning from the coaching staff there,” he said.

“When I was in my final year at school [Alva Academy], I was lucky enough to be brought into the senior set-up.

“As mentioned, I played against the likes of Anton Bresler while there were also some great second-rows/back-rows at Stirling who I learnt from greatly.”

“Heading into the Super6 season, I was coming off the back of a year playing regularly for County and for the Scotland under-20s and I was raring to go,” he explained.

“The competition in the squad was high and the training was intense which was good, but in the early part of the new competition [which began in November] I was not getting as much game time as I would have liked.

“With squads of 35 it is hard for coaches to keep everyone happy, but at my age I felt I needed to be playing more so I spoke with head coach Ben Cairns and decided to head on loan to English National One side Darlington Mowden Park.

“Garry Law, a fellow Scot, is player/coach there and he was really good with me and helped me to settle in. People who don’t know National One too well might not think the standard is that high, but there were some good teams that I came up against in my time there and some very good players and for myself. it was great to be getting game time and testing myself again.

“Sadly, the loan was cut short due to the lockdown, but I will always be grateful to Garry for the chance he gave me.”

“That was probably the highlight of my career so far”

Having grown up playing for the Caledonia region, Bundy became a key part of the Scotland under-20 set-up in the 2018/19 season, winning seven caps.

He came off the bench in two Six Nations games early last year against Italy and Ireland before starting against France in Pau.

Well done to former #teamalva Ross Bundy who started against New Zealand this weekend for @Scotlandteam u20s - well done Ross and team Scotland on a great game! Good luck on the rest of the tour! pic.twitter.com/s7NMoqwA9o

“That was probably the highlight of my career so far, the crowd was massive and the atmosphere was great,” he said.

“Those are the kind of matches you want to be playing in and I really enjoyed it. We lost in the end [42-27], but we scored five tries and showed that we could play a bit.

“Although the World Championship last summer in Argentina [when the Scots finished bottom] did not quite go to plan, again at times, we showed what we were all about and for me, facing the Haka and mixing it with New Zealand in the pool match was another highlight of my fledgling career.”