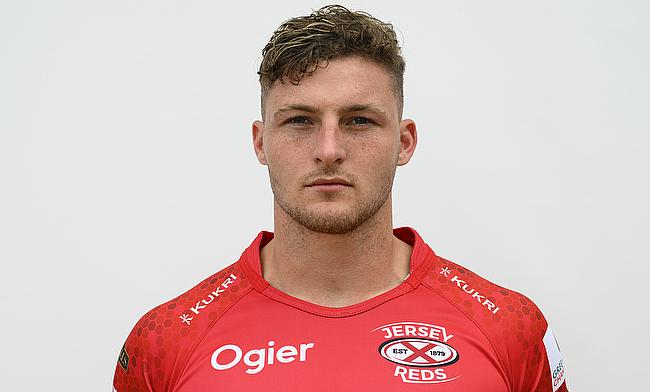 Jersey Reds will be looking to end 2019 on a high on Saturday when they host London Scottish in the Greene King IPA Championship - and young centre George Spencer can certainly reflect on a positive six months personally.

Before the recent break from league action for Cup games, Jersey had won their last two Championship matches against Nottingham and Ampthill to leave them fourth in the table, seven points behind leaders Newcastle Falcons.

Spencer, 20, came on in the Nottingham game and started the trip to Ampthill and he has been making steady progress in his first few months at this level since arriving in the summer.

The way he has performed in a new setting has been impressive for one so young and far away from home in Cape Town. It must be remembered that he was out of action from December 2018 until June 2019 with injury before he joined Jersey, so he really has hit the ground running at the Stade Santander International ground.

“Being born in England I was always keen to play in the English leagues at some stage and when the Jersey opportunity came around, I was keen to grab it with both hands,” Spencer, who is English qualified, told TRU.

Great to be back on the field after 9 months out, looking forward to Moscow next week ????

“It has been a great time so far. I’ll be honest I didn’t know too much about Jersey before I came here, but it is a really nice part of the world, the beaches and scenery are awesome.

“There are not lots of distractions and you can really focus on your rugby while I am playing amongst a great bunch of boys.

“The Championship is quite a forward-orientated league, but that means that you work hard on our defence as a back as well as working hard at getting yourself into the game more and I definitely feel like I have come on a lot as a player in the last few months.

“I have learned things in every game I have played from the experienced guys around me and all of them and the coaches push the young guys quite hard, but that will help me in the long run.

“We are not one of the biggest clubs in the division with a massive squad, but we have a great team spirit and work ethic and we will see where it takes us this season.”

He was born in Harrogate in Yorkshire to English parents and moved over to Cape Town in South Africa when he was five.

“I went to Bishops [College] and it has quite a history of rugby so I really got into the sport then,” Spencer said. “I played other sports too like water polo, football and golf and was quite big into then, but when I got to the age of about 17 I had to decide what I wanted to focus on and I chose rugby.

“Moving through the school age-grades I was in the ‘A’ sides and it was a great bunch of lads to be involved with and I played throughout the backline in those days.

“I then played Western Province under-18s and that was good because it took me out of my comfort zone a bit, showed me what I needed to work on and allowed me to work with different coaches and players.

“I was only in the set-up for a short time, but I went on a tour with them and I learnt a lot. I always knew I wanted to play over in the UK if I could though”

And that opportunity came when he moved to Scotland at the end of 2017.

“I got scouted by some of the guys over in Scotland and myself and [fellow young South African based player] Robbie Davies were given the chance to go to Edinburgh,” he explained.

“Before I knew it, I was flying over and I was part of the [FOSROC Scottish Rugby] Academy and was playing for Edinburgh Accies too.

Been a tough 7 weeks of rehab on the hammy and gutted to not make it back this year but too keen to be home next week ????

“It was an awesome experience, especially just coming out of school and then being in a new environment and living in a great city like Edinburgh.

“Going from schoolboy to senior rugby is quite a big step up, but at the same time I think the Tennent’s Premiership was a good league to help me adapt and I learnt a lot with Accies and training with the Academy guys.”

He said: “I decided to continue my rehab near my family in South Africa and it ended up being a longer road back than I thought. I ended up having a few problems with my back too so it wasn’t a great time for me.

“In the end I was in South Africa until June before I then moved to Jersey and things have gone from there."