Rising star Winning is ready to push on 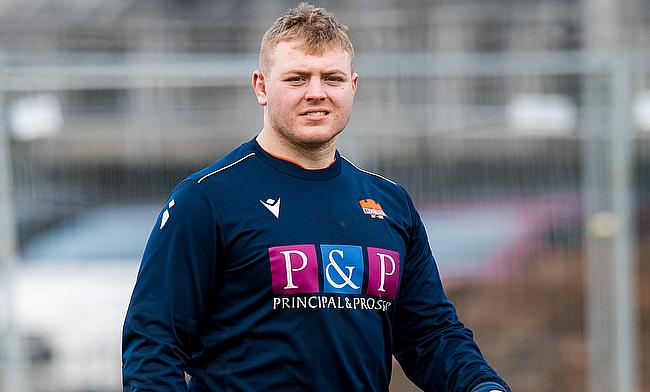 Darge has fond memories of facing England and now he wants another big high at Myreside
Spencer loving life at Jersey and looking forward to an exciting 2020
After Cokanasiga masterclass, Anderson is focused on stopping Fiji in World U20s
From sitting school exams one week to facing the haka the next: Rory’s remarkable rise

When Dan Winning came off the bench for his first competitive Edinburgh Rugby appearance last month, it was the end of one journey and the start of another.

The 22-year-old prop has been part of the Scottish Rugby Academy system since 2016 and is a former age-grade cap, but he was out for 14 months with a serious knee injury from late 2017 until early 2019.

As a result, he was delighted to get on the pitch during the Guinness PRO14 win over Connacht last month and he hopes it is the start of his pro rugby journey.

Winning’s first love was football, but aged 11 he found rugby and he has never looked back since.

“I started at Esher Rugby Club and about a year later I joined London Irish and played there until I was 18,” the player, who was born in South Africa and is eligible for Scotland through his grandfather, explained to TRU.

“Being in the Academy at London Irish and going to St Paul’s College which was linked with the club at the time really helped me develop as a rugby player and as a person and I enjoyed those years.

“I was involved with the Scottish Exiles from the age of 14 or 15 and in my last year at school I had the chance to head north and put myself forward for under-20s selection.”

?? Pick up a copy of The Capital this evening and take in features on Nick Haining, Damien Hoyland and Dan Winning, all for just £3. #EDIvCAR pic.twitter.com/xyAMtCiMeH

In the summer of 2016, Winning then relocated to Edinburgh and was handed a Stage Three Academy contract with Scottish Rugby.

Since his move to the capital, he has been linked with Boroughmuir and now Boroughmuir Bears in the FOSROC Super6 while in 2017, he earned five Scotland under-20 caps.

“The under-20s was a great experience for me while being part of the Academy for the last three and a bit years and playing with Boroughmuir has been really good too,” he said.

“After my under-20s experience I was ready to kick on with things, but that is when I suffered my ACL/MCL injury playing for Boroughmuir away at Ayr.

“That was really tough to take, but I just tried to refocus, knew I was young enough to get back and worked hard on my rehab.

“I got back fit and started to train quite a lot with Edinburgh around this time last year.

“To go from working on my own in the gym to being around internationalists in the full squad at the club was amazing and I just began to put the hard yards in and took things one step at a time to get back to the levels I was before and beyond.”

“Nel, Berghan and Ceccarelli have been so great with me"

And being a tighthead, Winning could not have better role models to learn from than Scottish internationalists WP Nel and Simon Berghan as well as Italian cap Pietro Ceccarelli.

“Those guys have been so great with me, always taking time to talk me through things after training and go over any questions I have,” Winning explained.

“They all love scrummaging so much and in such a technical position like tighthead you can learn so much just from watching them every day in training.

“To then get a call-up to the matchday 23 to be on the bench against Connacht was a great feeling.

“Playing for Edinburgh is something I have dreamed of since I moved up here so I tried not to get too nervous in the lead up to the game and then just did my best for the team when I got on.”

The PRO14 is now on a break until later this month and there is a great buzz about the Edinburgh squad who have made their way to the top of Conference B.

Next up they are on tour to South Africa for matches against the Southern Kings and the Cheetahs on March 21st and 28th respectively.

Winning will hope to earn a spot on the plane to South Africa and said:  “There is such good strength in depth here while the coaches are really good at getting the younger players in to train and learn from the main squad and everyone is going about their business with a smile on their faces at the minute.”