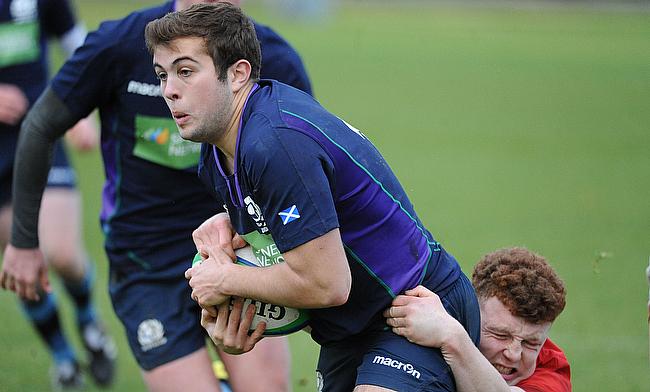 There have been a number of plus points to come out of the Scotland under-20s Six Nations campaign to date - and one of them has undoubtedly been the form of inside centre Robbie McCallum.

Yes, the young Scots may have won just one of their first four games in the showpiece event, but they have scored a number of impressive tries in attack and, as well as beating Italy, have pushed Ireland, England and France hard.

In the midfield, McCallum has linked up well with Matthew Currie and created a good partnership, the former becoming one of the leaders in the team as he is now in his second year at this level.

“I have always liked Robbie, he is a good kid,” Scotland under-20 head coach Sean Lineen told TRU this week about the 19-year-old.

“At under-18 level he did well and at this level he is a good runner, he has worked on his defensive game and his defence is now solid which is crucial for us from 12.

This Friday, Scotland U20 take on Wales in their final U20 Six Nations match at Stadiwm Zip World (kick-off 7.35pm) - live on S4C. #AsOne pic.twitter.com/GYNioTmrf1

“He works very hard and he has added offloading to his game too. He wants to improve and I want to see him do well.”

The player himself said: “I think it has been a positive campaign so far. There have been some tough losses, but we have played well throughout all of the games in spells and we want to put all of those bits together going forward.

“It has been quite frustrating [winning one game and losing three to date] because we don’t really want the gallant losers tag, we are a good team with good players and we know how well we can perform.”

From the boundary edge to the centre of attention

Originally from Milngavie in the west of Scotland, McCallum loved all sports growing up.

As he got into his teens, cricket and rugby - he played for the West of Scotland club at both - began to take up most of his time outside of school hours.

“For my last three years of school, I moved to Loretto [in Musselburgh, near Edinburgh] mainly because I knew the then cricket coach there John Blain because he had coached me at West,” McCallum explained.

“I played cricket for Scotland at under-15 and 17 age-grades, but then started to focus on rugby. When I left school [in the summer of 2018] my older brother Sandy was doing a year abroad in Spain and I went out too, it was a good opportunity to get some life experience.

“I played some rugby for Compultence Cisneros in Madrid and then I came back home for a Scotland under-19s session, played in a game and did quite well.

“There were then a couple of injuries and I was called into the under-20s and I played in the 2019 Six Nations and then the World Championship.

“As a result, I was only really in Spain from September to November of 2018. I was going to play at the club and learn a bit of Spanish at university, but the under-20s took over.”

Later this year, Scotland will not be in the World Championship at under-20 level, but instead, the World Trophy in Spain after they were relegated from the top tier.

McCallum and others who played last year in Argentina are keen to bounce back at the first attempt and, on their recent Six Nations showings, the tough World Championship in 2019 has given them a determination and a harder edge following a steep learning curve.

“Since the Six Nations last year It has been really good for myself personally being back in Scotland and being involved with the [FOSROC Scottish Rugby] Academy,” McCallum explained.

“We now have George Petrakos as our S & C coach with the Academy and he has been great to train with while I also train with Glasgow Warriors.

“I am a player for the Boroughmuir Bears in Super6, but two weeks before the new competition started in November, I was injured playing on a friendly round robin day between my club, the Ayrshire Bulls and Stirling County. I had a grade two AC joint issue in my shoulder and I was out for a couple of months.

“I then got a couple of games in with GHA in the Tennent’s Premiership to help me get back to fitness, they were a very welcoming club and it was great to get some game time and get back into the swing of things.

“Then we were into 20s stuff and I have been loving it the last couple of months."

Wales under-20 against Scotland under-20 in the age-grade Six Nations is still due to go ahead on Friday evening at Stadiwm Zip World, Colwyn Bay, at 7.35pm - it is live on S4C and on the BBC iPlayer