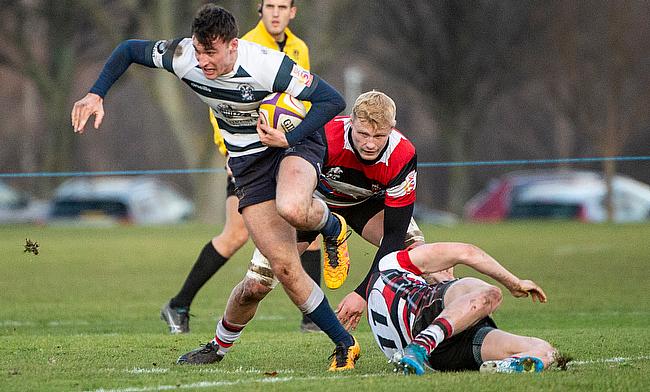 From off drives to offloads: The rise of Scottish centre Robbie McCallum
Super6 gets off to a solid start with three away day successes
“We want the best young players to be challenged by the Super6”
Super6 in Scotland on the horizon

The inaugural FOSROC Super6 season may have been cut short in Scotland before the play-offs due to the COVID-19 outbreak, but there were plenty of individual performances between November and early March in the semi-pro tournament that caught the eye.

One player who stood out for Edinburgh side Heriot’s - who won seven of their 10 regular season games and were due to play the Ayrshire Bulls in the semi-finals - was Rory McMichael.

As a youngster he enjoyed playing centre, but ever since he broke into the Scotland under-20 set-up in 2018, he has played most of his rugby in the back three and was often used on the wing or at full-back by Heriot’s.

He headed into Super6 with two years under-20 experience behind him and that left him looking right at home in the semi-pro environment, enjoying the swashbuckling attacking style that Heriot’s try to play and being solid in defence.

Having just turned 21 in February, the university student - who, all being well, will be starting his third year of studies later in 2020 - should have a bright rugby future ahead of him.

Team of the Tournament ??

After ?? rounds, we’ve reviewed and selected a match-day 23 that make up the FOSROC Super6 Team of the Tournament.

“I was keen to get involved with the Super6 when it was mooted last summer and playing for Heriot’s in the competition’s first year was good, McMichael told TRU. “I believe the standard on show was getting better week on week and, overall, has set a good platform for the format to grow going forward.

“Having played for Heriot’s first XV in 2018/19, it was a club that I really enjoyed being part of both on and off the pitch, everyone was really welcoming when I first arrived at Goldenacre and the talent in the Super6 squad was very impressive and the guys around me helped me get better as things went along.”

A Fleet-ing cricket career before rugby took over

Rory grew up in Fleet in Hampshire and began playing rugby when he was nine.

That was when he was at Yateley Manor School and although cricket took up more of his time, he also enjoyed rugby.

“I then got a scholarship to Wellington College to play cricket, but It was a very good rugby school too so my rugby started to take off as well,” Rory explained.

“As a cricketer, I started off as a bowler, but ended up being a bit of an all-rounder and when my rugby progressed and I started to play for Scotland under-16s.

“When I was at Wellington, we just had some really good coaches while I was exposed to playing against some of the best schools in the country. Wellington also had links with Harlequins and London Irish at the time so I started at ‘Quins in their junior Academy set-up and then moved onto Irish.

“It was all a great learning curve and meant that I was training and playing at a high level regularly at school and elsewhere.”

Rory mentioned the Scotland under-16s and he was involved with the Scottish Exiles system from under-14 level. He missed out on national under-16s selection at his first attempt, but through perseverance and hard work made it into that squad the following year.

“It was a great honour to represent Scotland at under-16 level and then I had two years with the national under-18 team which taught me a lot,” Rory, whose mother is Scottish and whose dad also has connections north of the border, said.

“That was a massive step-up from anything I had experienced before at the time, but it showed me where I needed to be as a player if I wanted to push on and then get into the under-20s.

“I finished school in 2017 and decided to take time to spend a few months in Shanghai in China to teach in preparation for me starting to study Chinese and Economics at university the following year.

“Before I left the UK I had torn my hamstring so I was out of rugby anyway for a spell. Alongside teaching in China, I coached a bit of rugby and football and managed to rehab the injury and get back to full fitness for when I returned to these shores around Christmas time.”

“It was all a bit of a whirlwind at first, but I loved the under-20s experience”

As soon as he was back. Rory was called into the Scotland under-20 squad for the 2018 Six Nations and he had to hit the ground running.

He moved up north of the border to play for Glasgow Hawks and he lived with his auntie and uncle for a few months whilst earning under-20s caps against Wales, France, England and Ireland.

“It was all a bit of a whirlwind and although I didn’t make the under-20s squad for that summer’s World Championship, I was determined to have a good 2019 with the team again,” he recounted.

“By then I was studying at Edinburgh University and playing for Heriot’s and I felt good going into the 2019 Six Nations. I knew more what to expect that year and I started all of the Six Nations games before going to the World Championship in Argentina.

“We struggled at times there and, in the end, were relegated, but I think as young rugby players we all learnt a lot from the experience which will make us stronger going forward.

“In that tournament we played against New Zealand and facing the Haka is something I will never forget. I loved the under-20s experience and am still friends with a lot of the guys, great times.”