Bright future ahead for Strathclyde after announcement of Glasgow Warriors partnership 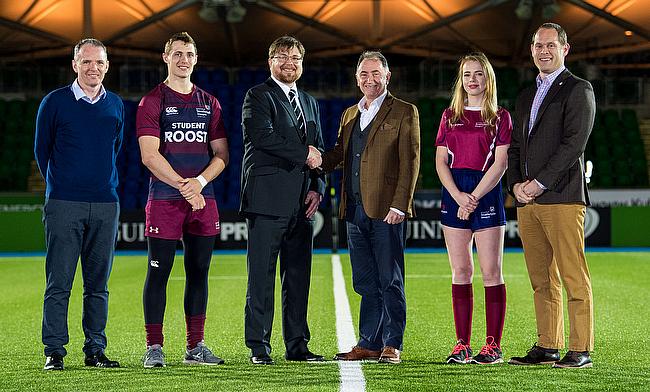 On Wednesday afternoon, the University of Strathclyde men’s first XV play University of Glasgow in a derby encounter - and with a link-up with Glasgow Warriors now formalised, it is certainly a step in the right direction.

The teams will clash at Scotstoun at 1.30pm in BUCS North B in what is set to be a tight affair, Strathclyde having won the Varsity match 17-15 earlier in the campaign and Glasgow having been triumphant in the first league meeting 13-10.

Strathclyde go into the match with a spring in their step from the news announced over the festive period that they have teamed up with the Warriors to promote the growth of the university rugby programme and establish itself as a prominent institution for the sport for male and female athletes.

The initial one-year, innovative and pioneering partnership will see the two organisations explore opportunities to work together on a strategic programme of activity to maximise not only on-the-field success, but also to have an impact on the student experience, student recruitment and international reputation and profile.

Nathan Bombrys, Managing Director of Glasgow Warriors, said: “There are some very exciting opportunities ahead, which include supporting Strathclyde’s rugby programme.

Great to see such strong support for student rugby at the Glasgow Varsity match between @GUSAMensRugby and @StrathRugby ??

Strathclyde University took the title for the second year running, 19-17. ??

“We’re also going to explore opportunities for their students to learn in collaboration with our business through work place experience or research opportunities within the performance and commercial departments of the club.

“The University of Strathclyde is one of Scotland’s largest universities and we’re looking forward to enhancing its excellent reputation in sport through this exciting new partnership.”

Neil Brown, Head of Strathclyde Sport at the University of Strathclyde, added: “This partnership is part of an exciting journey we’re embarking on to establish Strathclyde as a centre of excellence in rugby, aligning sporting opportunity with academic attainment.

“By working with Glasgow Warriors, we will have positive impact on the student experience and student recruitment and further cements our reputation for sport following the opening of our state-of-the-art Strathclyde Sport facility.

“Strathclyde has a strong reputation of playing a part in the development of successful rugby players whilst at the institution with the likes of current Glasgow Warrior player James Malcom who is currently undertaking his Mechanical Engineering whilst playing at the highest level.”

As part of the partnership, Gary Strain has joined Scottish Rugby as a Resource Coach working with Glasgow age-grade and Academy players and he will also double up as Director of Rugby at University of Strathclyde.

“I am looking forward to working in both of these different environments,” Strain told TRU.

“It is a great draw for Strathclyde to have a link-up with the Warriors and we are looking to try and bring talented players from Scotland and beyond to the university.

“We are looking at bringing in professional players to do position specific training sessions with us, for example we have already lined up [Scottish Rugby Ambassador] Chris Paterson to work with the Strathclyde kickers.

“Stepps will still be our home ground, but the Warriors are allowing us to use Scotstoun for the derby match with Glasgow and that creates a real buzz and puts a focus on university rugby.”

Strain has a long history of playing and coaching as he embarks on his exciting new roles. He started off at Dalziel when he was just five and progressed through to play within the senior section at the Motherwell club.

While he was studying chemical engineering at the University of Strathclyde, he decided to make the move to Glasgow Hawks after his first year. Four years in the Hawks’ first XV followed while he also trained one day a week with the Warriors whilst studying.

BREAKING | The University of Strathclyde has teamed up with Glasgow Warriors to promote their rugby programme and as part of this exciting new partnership Gary Strain has joined @UniStrathclyde as Director of Rugby.

“I then headed out to France to have a totally new experience both in terms of rugby and lifestyle,” he explains.

“I played for Massy in the Pro D2 for two years and then was with Newcastle Falcons in the English Premiership.

“Two short spells with the Warriors came next and that is when my coaching really started to flourish. I worked at Kelvinside Academy and then I became the Development Officer and Performance Academy Manager at Glasgow Hawks.

“During those four years in that role at Hawks, I started to coach regional age-grade sides and began working with the Scotland under-17s which I still do now as the Forwards Coach.

“I am currently playing for Glasgow Hawks in the Tennent’s Premiership and workwise, I am really excited to be getting my teeth into my new projects.”

In terms of the growth of university rugby, Strain knows from personal experience just how much it has improved in Scotland in the last decade or so.

“It is like night and day really from when I was a student at Strathclyde,” he added.

“There is a state-of-the-art new sports centre now, top quality strength & conditioning provisions, a swimming pool for the players to use and at Stepps, the pitches are of a really good standard and have just this week had floodlights installed.

“On the field, well when I was at university rugby was very much social, but now we have 114 male members with three teams in BUCS leagues and a fourth XV who play in social tournaments.

“There are 25 female members and they play as a team in the BUCS leagues as well, so it is an area where there is growth in Scottish rugby.

“The standard of the student player is also going up while I mentioned the exposure these players now get to top level coaching.

“The first XV’s game against Glasgow this week is a great way to start off the year and I am expecting it to be a cracking match.”