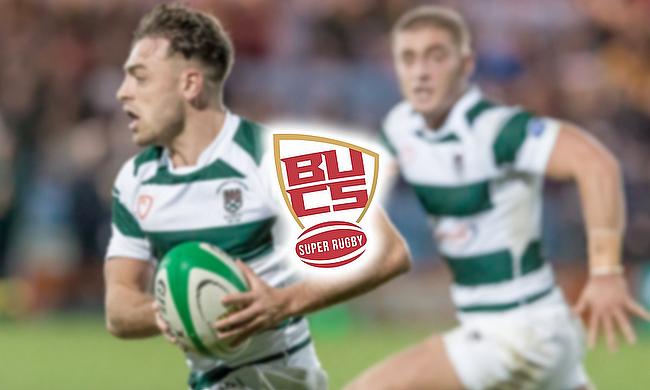 What a BUCS Super Rugby season we are having.

The mandatory Christmas break is upon us and all 10 teams will be using the fesitive period to recharge their batteries ahead of 2019.

After the first four months of the campaign, we have had five different leaders at the summit of the division and currently holding pole position are the University of Exeter.

The league has been unpredictable, but compelling thus far and TRU brings you a BUCS Super Rugby half-term report...

There would have been a sense of disappointment surrounding the University of Exeter last season. After winning the BUCS Super Rugby domestic title, Keith Fleming’s side were humbled by Hartpury in the Championship semi-finals, but they have shown no signs of a ‘hangover’.

As things stand, they top the league table by two points and some of their performances have been typical Exeter. Their recent win over Cardiff Met highlighted their clinical qualities and at Topsham, they have been a huge threat.

Yes, they suffered a 29-0 home defeat against Hartpury at the start of December, but the fact Exeter sit at the summit of this extremely competitive league shows they are most certainly one of the favourites to reach Twickenham next year.

Following a slow start to the 2017/18 season, head coach Sean Lynn would have been hoping for a stronger beginning this time around and his Hartpury side have delivered. After retaining their BUCS Super Rugby crown back in April, the Gloucestershire outfit have stayed firmly towards the summit of the division this term, but they are currently behind rivals Exeter.

Eight wins from their first 12 games leaves them two points off the summit, but recent defeats to the University of Bath would have disappointed Hartpury, especially after comprehensively beating Exeter 29-0 this month.

They ended the year with a thumping win over Cardiff University – with star man Ervin Muric leading from the front - and as we approach 2019, Hartpury remain on course for their third successive BUCS Super Rugby Championship final.

It was always going to be difficult for Cardiff Met to touch the heights of last season, but Danny Milton’s side are continuing to break new boundaries. After reaching their maiden Twickenham final, Met have remained very consistent and are once again in the mix this time around.

Obviously, they lost key figure Alex Dombrandt to Harlequins in the summer, but some of the class of 2017/18 have certainly stepped up to the mark. The likes of Luke Northmore, Harry Johnston and Eduardo Balocco have shone for the Welsh side and despite losing to Exeter in their final game before Christmas, they sit just three points off the summit.

Magnificent in the BUCS 7s back in April, Alex Keay told TRU that his Durham side were keen to have a much better season in the XV-a-side game this year.

Durham finished in eighth place last term and picked up just four wins, but that seems like a distance memory as the Palatinate currently occupy fourth spot. They have an identical record to both Hartpury and Cardiff Met, but their lack of bonus points leaves them eight points behind leaders Exeter.

Players such as Jacob Collin, Myles Rawstron-Rudd and Henry Paremain have been Durham’s standout performers thus far and with these names in their armoury (as well as Newcastle Falcons Charlie Wilson and Ben Stevenson), they have every chance of challenging for honours in the New Year.

Like Durham, the University of Bath were itching to have a stronger domestic campaign in 2018/19 and I think this season has been a success so far for Aaron James' side. Outstanding wins over Hartpury and Exeter highlight the quality the Blue and Gold's possess, but slight inconsistencies have just stopped them from sustaining a place towards the top of BUCS Super Rugby.

Their most recent defear against Leeds Beckett highlights this point, but they have shown on multiple occasions what they are capable of and Bath will be hoping their big game performances are more frequent next year.

There is no doubt that Northumbria have shown the sort of quality that saw them have a phenomenal campaign last year, but their lack of consistency has also held them back from challenging towards the top.

Darren Fearn’s men have beaten four of the five sides who are directly above them in the table and they did sit at the summit of BUCS Super Rugby at the start of October, but the North East side have not managed to string more than two consecutive wins together all term.

Northumbria end 2018 with a dominant win over Nottingham Trent!

Cheers for the game @NTURugbyUnion, safe travels home. Wishing you a Merry Christmas and a happy new year!@NorthumbriaMRU 41@NTURugbyUnion 5#BUCSSuperRugby

It just highlights how competitive BUCS Super Rugby is this year, but Northumbria have an abundance of talent in their squad which can help them generate some momentum when they return to action at the end of next month.

Two wins from their first four games, including an outstanding victory over Hartpury, represented a steady start to the campaign for Leeds Beckett.

They also concluded 2018 with successive wins, but it is in-between where their might some frustration for Kerry Wood and Colin Stephens.

Defeats against the likes of Loughborough and Cardiff University has meant Beckett’s focus has been on moving away from the wrong end of the table, but now they will be hoping to concentrate on what is in front of them.

Players such as John Okafor, Johan Visser and Connor Lloyd could be key to Beckett’s progress as they aim for back to back top four finishes.

It has been a stuttering season for Loughborough University following their sixth-place finish last year. The Midlands club have had difficulty picking up victories and it seems unlikely they will really challenge for a place at Twickenham this term.

Loughborough do have to balance their BUCS Super Rugby side with their National One commitments so it was always going to be tough, but they will be eager to improve on just three wins this term when they resume their university rugby campaign next month.

Nottingham Trent University made a superb start to the season under the guidance of Alex O’Dowd, but their campaign has slightly veered off course.

Since beating Loughborough and Cardiff Met in the opening weeks of the term, they have managed just one victory. The Midlands club are just a single point clear of the relegation place in BUCS Super Rugby, but they did produce a strong second half of the season last term so Trent will be hoping history repeats itself.

Added to this, with players such as Max Craven and Harry Graham in their locker, they do have the capabilities to turn their fortunes around.

Branded with the tag of relegation candidates before the season begun, new boys Cardiff University are currently at the foot of table, but they are certainly not wilting under the pressures of BUCS Super Rugby.

Cardiff University Director of Rugby @alundaves007 described his side as a "plane on the runway" earlier in the season, but they certainly took off on Wednesday after claiming their first win...

Led by charismatic coach Alun-Wyn Davies, Cardiff are only one point off safety and wins over Leeds Beckett and Northumbria suggest the Welsh outfit are determined to spend more than one season in the top flight.

Recent defeats against city rivals Met and Hartpury means Cardiff have lost 10 of their 12 fixtures this term, but with key players returning from injury, they will continue to battle in 2019.