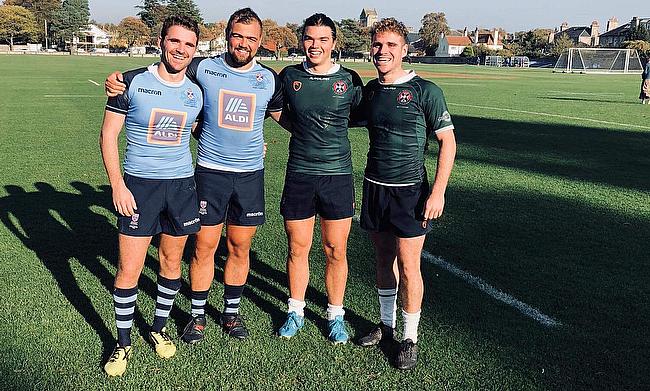 Brothers in Arms: The Kelly's and Walker's after St Andrews' clash with Edinburgh
©William Syme

We often hear about the wider rugby family, but recently in a Scottish universities clash, it was more brothers in arms - or in fact in opposition…

The University of St Andrews first XV clash with the University of Edinburgh’s second XV in BUCS league Scottish 1A had been circled on the calendars of the Kelly and Walker siblings for quite some time before last Wednesday’s meeting in the East Neuk of Fife.

The home side, now coached by former Scotland hooker Scott Lawson, eventually won the match against their dogged opponents 17-14, but afterwards in the bar everyone was talking about the two sibling rivalries.

That is because scrum-half Jamie Kelly (St Andrews) was playing against his identical twin brother in the shape of back-row Connor Kelly (Edinburgh) while wingers Roland Walker (St Andrews) and little brother Magnus Walker (Edinburgh) faced off in the same game.

Our starting XV shows only 2 changes from the bonus point victory against Dundee.

Jamie Kelly starts at 9, and will face his twin brother Connor, who plays in the back row for Edinburgh.

Head down to Uni Park on Wednesday, and cheer the boys on pic.twitter.com/NYI6yeIlQ6

The 19-year-old Kelly twins grew up in London, attending St George’s College in Weybridge, and are a pair of a total of six siblings - four boys and two girls - which also includes triplets.

Being the same age, the Kelly brothers had played in the same school teams and with London Irish since a very young age, but last week was the first time they had been on different sides.

Until recently Jamie, who is a second-year international relations student at St Andrews, was a centre, but he has now converted to playing number nine.

“It was an amazing experience to play against Connor,” he told TRU.

“On the pitch we just tried to focus and get on with things, but we were surprised by our Dad who travelled up to watch and that was really nice for us both and then we shared a beer afterwards.

“When we played in the same team at school and at London Irish, referees used to sometimes say to one of us ‘you were all over the pitch today’ - and then we would explain that there were two of us!”

Connor is the captain of Edinburgh’s 2nds and the second year geography student said of the match-up: “We both left home for pre-season training in August around the same time and with the St Andrews 1sts and us being in the same BUCS league, this time around we knew the chance to play each other was coming around soon.

“As a second XV heading to their patch we knew it would be a big task, but I had faith in the team.

“Knowing that my brother had just moved to scrum-half from centre, I was keen to make my mark early from the back-row and I managed to get a hit in on him in the first five minutes - he seemed to stay clear of me after that!

“The dream for me now is to try and push into the first XV maybe in my third or fourth year and play against Jamie in a Varsity match at BT Murrayfield, that would be quite impressive.”

Roland and Magnus grew up in Hong Kong and then, when their family, returned to their Ayrshire roots in Scotland as they headed south to secondary school at Ampleforth College in Yorkshire.

The former is the skipper of St Andrews 1sts and said: “It was a shame that one of their players had to go off injured just seven or so minutes in, but it meant that Magnus came on and it was pretty special being on the same pitch as him again.

“Our father was there watching and I think he was intermittently cheering for both sides while it may have been a ploy from their coach to keep us on opposite wings!”

Roland, 23, is in his fifth year studying for a history degree and is loving life in St Andrews under the tutelage of former pro Lawson.

— The University of Edinburgh (@EdinburghUni) August 3, 2018

“He has a wealth of experience and some great ideas and since he came in this summer, the guys have loved learning from him,” he stated.

“I am keen to have a really good season in my last year at university.”

Twenty-two-year-old Magnus, who is in his fourth year of a geology and physical geography degree at Edinburgh, said: “We were on opposite wings during the game and we did not really come in direct opposition with each other until the final play of the match.

“I helped us score a try in that instance, but they held on for the win although I think, as a second XV, we can be proud of how we played.

“The day before we had met up and had a bit of fun about the whole thing, but during the match I tried not to think too much about playing my brother while Roland is their captain and would not have wanted to lose to his little brother or a second XV so he had his team pretty fired up!

“It was a day we will always remember. I am very much enjoying my rugby at Edinburgh because there is a great culture and set-up at the university.”

This week, St Andrews travel to Heriot-Watt University while Edinburgh host the University of Aberdeen.