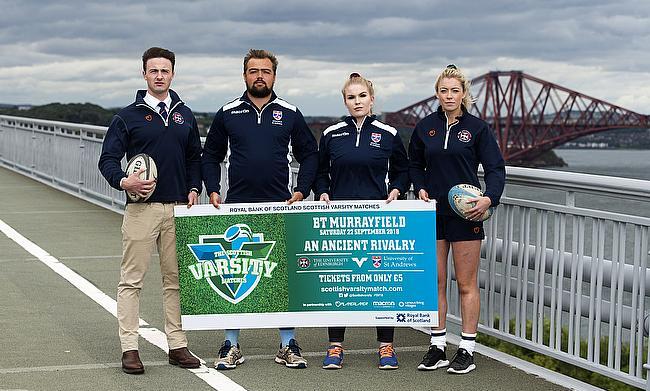 The beginning of the University Rugby season is upon us and TRU looks ahead to the annual Scottish Varsity which takes place at Murrayfield this weekend.

Some 23 weeks have passed since the BUCS Finals Day at Twickenham, but now university rugby is gearing up for another action-packed campaign.

Across the UK, teams will be going through rigorous pre-season training drills and routines ahead of the new term which begins over the next month.

For some universities, they will use their upcoming matches as a way of increasing fitness and game time before the start of the 2018/19 term, but for the University of Edinburgh and the University of St Andrews, their biggest fixtures of the year are first on the agenda.

This weekend, the curtain raiser for both of these institutions begins at BT Murrayfield as the annual Royal Bank of Scotland Scottish Varsity takes centre stage in the capital for the fourth year running.

Be part of the Ancient Rivalry and an expected crowd of over 10,000https://t.co/mHuD9MVl2d https://t.co/h6DMYIGbdO

In 2017, Edinburgh Ladies maintained their excellent recent run against their rivals with a thumping 53-5 victory while St Andrews claimed the bragging rights in the men’s fixture following a 31-7 win in front of a packed crowd of over 10,000 people at the home of Scottish Rugby.

This year’s Varsity is expected to draw a similar attendance and Edinburgh’s Head of Performance Claire Cruikshank cannot wait for the showpiece event on Saturday.

“It’s really exciting,” she said. “It’s a great way to start the season and you don’t get many bigger occasions. It provides a real focus for pre-season. It’s been three to four weeks of hard work and everyone is excited to get out and play some rugby!”

Cruikshank is also the Head of Performance for Edinburgh Ladies and her side reached the semi-finals of the BUCS competition last season after appearing at Finals Day in 2017.

At the conclusion of the last academic year, Edinburgh saw several of their key players end their time at the university, but Cruikshank is excited by the influx of new athletes who can contribute to the success of the team over the next few seasons.

She added: “We knew we would be losing quite a lot of our established players who were key individuals so we lost about 10 of last season’s squad.

“But, we have been able to bring in a couple of U18 internationalists and, as always, a few new people have arrived who you had no idea were coming!

“We had our ‘Come and Try’ session last Friday and we had 70 girls come down. It was really pleasing because the conditions on that Friday were terrible! On Monday night, we had about 90 people training so numbers are looking good again.”

Part of the @Scotlandteam team that is on the up ?
Helped the national sevens team retain a Grand Prix spot ?
Ready to hit the heights with @LMRCV_F and @MRC_Feminin ?

Over the last couple years, Edinburgh has seemingly been a hotbed for talent with some of their young stars moving into the professional game off the back of their time at university.

The likes of Sarah Law, Helen Nelson and Lisa Martin have all gone on to earn contracts with Scotland Rugby and occasions such as Varsity allow these players to shine and showcase their abilities on the big stage.

“I think what university allows is, while some courses are really full on, it does allow that semi-professional lifestyle,” added Cruikshank. “It is a great stepping stone on to that next level.

“Obviously, Helen, Lisa and Sarah have gained that next step and it’s great to see. I think university sport is now on the radar, especially in Scotland and with our Varsity.

"In the men’s game and with BUCS Super Rugby as well, it is a massive pathway for an athlete into professional rugby.

“You don’t have to go straight from school and into an academy to get a pro contract. That academic route into pro rugby is now being seen as a viable option. Up here, there are some good discussions taking place how that can work from a Scottish perspective.”

The profile of university rugby north of the border was arguably boosted further when former Scotland international Scott Lawson was announced as St Andrews’ new Director of Rugby in the summer.

Lawson recently retired from the game after earning 47 caps for his country as well as plying his trade at the top level for Glasgow, Gloucester and Newcastle Falcons.

On Lawson’s appointment, Cruikshank said: “Scott is a name. He’s played for Scotland which adds kudos automatically. He’s done his time coaching alongside playing at the highest level and I think he’ll make a big impact at St Andrews in both the men’s and the women’s game. He is keen to see the women’s side develop too which can only be good for the game in Scotland.”

Of course, Lawson will be in the opposing camp this weekend as he looks to guide St Andrews’ Men’s side to back to back Varsity wins.

The 36-year-old had a spell coaching National Two North side Tynedale last season during his final few months with Newcastle and he is excited by his new challenge in the university game.

Enjoyed catching up with @scottlawson02 on his plans for @UStARugby @UStARugbyW. University rugby is one important means of addressing the drop-off in player numbers between under-18 and senior game pic.twitter.com/hEwdvENUza

“The opportunity presented itself to me and it was too good to turn down,” Lawson told TRU. “It is tough as a coach to find somewhere which suits you and St Andrews was a great place for me to come and coach because it is a really good standard, but also the vision of where they want to go is really promising.”

Lawson is first to admit that his knowledge of the university game was limited before he joined St Andrews, but after the first couple of months in his new environment, he is excited about the season ahead.

“It was different me coming to St Andrews,but you can tell why university rugby is growing,” Lawson continued.

“We have really strong men’s and women’s teams here and that is hugely impressive for the programme. Their effort and hard work in pre-season has been excellent. No-one likes pre-season and I know that more than most so we are eager to play some rugby on the weekend!”

Lawson will be no stranger to a Saturday afternoon at Murrayfield, especially having been involved in this year’s Six Nations campaign with Scotland, and both he and Cruikshank are looking forward to kicking off the new season in style this Saturday.

“These players will feel very fortunate to be playing in the national stadium,” said Lawson. “It is the biggest student sport event in Scotland and it is about all of the players going out there and enjoying themselves.

“Yes, it would be nice to win both matches, but it is about being involved and it is great to be a part of.”

Cruikshank added: “Quite a few of the girls are getting their opportunity this weekend and they deserve it.

“They have worked really hard in pre-season which made it very hard for us not to select them which is a good problem to have.

“We are going into a rebuilding year and an unknown year, but we are really keen to see how our young and talented squad can develop so everyone is really excited about playing in front of 10,000 at Murrayfield.”

Tickets for Varsity can be found here: https://www.eticketing.co.uk/varsity/.