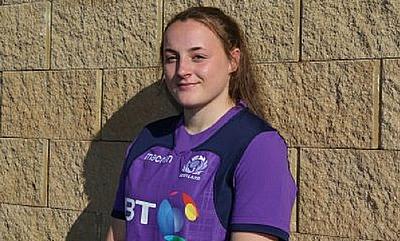 Most teenagers use the summer between school and university to get themselves prepared for the big move away from home, but Evie Gallagher took it all in her stride and played rugby for the full Scotland Sevens team instead.

For good measure, once she had arrived in Edinburgh from Stirling she then scored a hat-trick of tries on her University of Edinburgh debut as they won the Scottish Varsity match by defeating St Andrews at BT Murrayfield last month.

And now the 18-year-old centre is set to make her BUCS Premier North debut for the side from the Scottish capital on Wednesday evening against Northumbria University away at Kingston Park.

“It has all been a bit crazy,” Gallagher told TRU as she looked back on the last few months.

“I had been involved with pathway squads and Scotland age-grade squads for a couple of years, but when I got a call from Scotland Sevens head coach Scott Forrest early in 2018 asking me to come and train with their group, I was really shocked to be honest.

“The first couple of sessions around March/April time were a bit scary, but once I got going I kept telling myself that it is just rugby and tried to be a bit more confident to show what I could do.

“I was just 17 at the time and thought I would just be there for the experience, but then Scott spoke to me and told me I would be involved in the warm-up tournament in Amsterdam.

“I also got more game time than I thought I would get out there and that boosted my confidence.”

Fast forward a few weeks to the end of June and Gallagher - who plays centre in XVs and in the forwards in Sevens - was even more surprised to be named in the squad for the Rugby Europe Grand Prix event.

Following Scotland’s promotion in 2017 they were in with some big guns for the two-day event in Marcoussis, Paris - and Forrest had no qualms picking the youngster.

Gallagher recounts: “It was scary at first out there because the speed and level was like nothing I had been part of before, but then I just started to enjoy it and as a squad I think we settled into things a bit on the second day.

“We left there thinking that we could compete at that level and although I wasn’t selected for the second event in Russia, we comfortably kept our place in the Grand Prix and there is loads to build on ahead of next year.”

Rewind to childhood and Gallagher’s love of rugby started at a young age, having tried all the sports under the sun like most people growing up, but rugby was the one that really grabbed her attention.

Her Mum knew someone at local club Stirling County and things snowballed from there and before she knew it, she was playing mini rugby against the boys.

“Playing with and against the boys at a young age is what made the difference for me because they were really competitive and it made me competitive,” she recounts.

“I enjoyed challenging myself against them during our junior school years and even when I started secondary school [at Stirling High School, although I could not play contact with the boys, I still trained with them at times to keep working on my skills.

“Between my time in the juniors and moving up to the girls under-15 team, I didn’t play too much competitively as the Stirling County junior section grew, but once we had good numbers we played lots of games at that level and at under-18s and we were quite successful.

“I was 15, nearly 16 when I started playing in the under-18s team and most of our team was quite young and really keen to get better at the time so we enjoyed taking on some more established teams and seeing how we could do.”

Gallagher graduated from the Stirling County youth ranks having won one under-18 final and lost one at the national stadium in Edinburgh - and she then hit the headlines at the same ground on her University of Edinburgh bow.

Our 1XV to take on Northumbria at 19.45 tomorrow at Kingston Park! #WeAreEdinburgh #BleedGreen pic.twitter.com/pnFbSbIwoJ

The capital side defeated the University of St Andrews 49-0 at BT Murrayfield in mid-September as England age-grade cap Sally Stott joined Gallagher in scoring a hat-trick of tries.

“That was a great day and I feel like I have fitted in well with the university team over the last few weeks,” Gallagher, who turned 18 in August and is in first year studying ecological and environmental science said.

“The squad all push each other on in the gym an at training and we set high standards for ourselves.

“I am excited to begin playing BUCS matches with this squad.”

University of Edinburgh coach Claire Cruikshank said of the new recruit to her squad: “Evie is a really strong addition to our team, she’s unassuming and just goes about her job in a quite manner.

“Along with the other new players within the squad, she has brought a fresh outlook to the programme which we’re excited about. The squad this year is young - they are all young players with huge potential - and it’s great working with them as they are constantly asking how to improve, so as coaches we’re being challenged daily.

“We’re really excited to see how this new squad goes against some quality players in the BUCS Premier North league.”