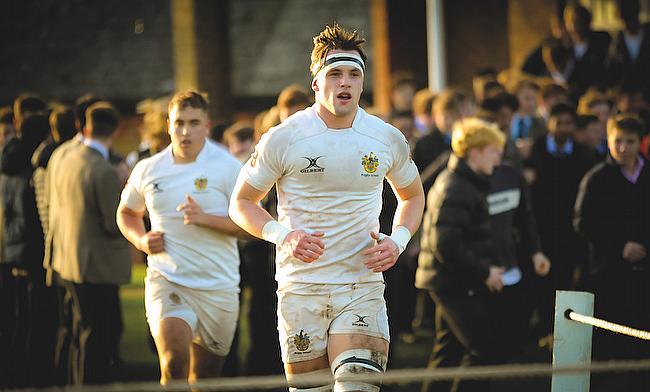 Studious Hunter-Hill focused on a bright future on and off the pitch
Darge has fond memories of facing England and now he wants another big high at Myreside
Boyle-ing point: Connor on top form ahead of a big couple of months
Sergeant is now ready to represent the Barbarians

Those who watched Edinburgh Rugby defeat Glasgow Warriors at BT Murrayfield on Saturday to clinch the 1872 Cup and a Guinness PRO14 play-off spot will have noted that their back-row is very strong.

In the 30-15 ‘away’ win played behind closed doors, Luke Crosbie, Hamish Watson and Fijian Bill Mata started while Nick Haining came off the bench.

They also have the likes of injured Scotland duo Jamie Ritchie and Magnus Bradbury on their books along with six Lewis Carmichael, Mesu Kunavula and first year pros Rory Darge and Connor Boyle who are both highly thought of.

Of the Stage Three Scottish Rugby Academy members training regularly with Richard Cockerill’s full squad, Jack Mann and Ben Muncaster are keen to make their mark during 2020/21 with the latter loving being back north of the border following a great rugby education down south in recent times.

Muncaster, 18, told TRU: “Over the last few years I have had a great time down south at Rugby School and as part of the Leicester Tigers’ academy, but being a proud Scot and having played age-grade rugby for the country already, when the chance came up to continue my sporting journey with Edinburgh Rugby I was keen to take that opportunity.

Rugby returned in Scotland on Saturday at @BTMurrayfield, with @EdinburghRugby securing their @PRO14Official semi-final place and lifting the 1872 Cup ??

“Don’t get me wrong, it was hard to leave Leicester because the culture there is brilliant, but everything swayed me towards Edinburgh to be honest and I am very excited to be here.

“I have always had a great love for Edinburgh as a city and I have a lot of friends here while the end goal is obviously to play for Scotland and I felt this was the right place for me right now.”

With a hectic schedule coming up, Edinburgh now have more Stage Three players training with the full squad than ever before - and Muncaster is already thriving from learning off Watson, Mata, Ritchie and co.

“Everywhere you look at training there is a world class back-row player,” he said.

“It has been so good being in and around these guys for a few weeks now and I am just trying to be like a sponge and soak up every bit of information they pass onto me.

“Everyone has been so welcoming and I don’t feel like the ‘new boy’, I am just getting my head down and learning from the best every day.”

“My garden was right next to the rugby club!”

Muncaster is the latest rugby talent to start out his life in the sport in the East Lothian town of North Berwick.

The likes of the aforementioned Carmichael, Edinburgh centre Chris Dean, Saracens second-row Callum Hunter-Hill, Scotland Sevens players Tom Brown and Harvey Elms and Scotland Women’s players Liz Musgrove, Annabel Sergeant and Megan Gaffney all progressed through the ranks in a town which is more well known for its golf courses and beach.

And now Muncaster has done the same, stating: “When I was growing up, my garden was right next to the rugby club, so when I was four or five I joined the minis section at North Berwick RFC and it was great fun.

“Once my time in the minis had finished, I was lucky enough to get a rugby scholarship to Loretto School in Musselburgh nearby.

“I went to the school for about four or five years and although I was playing quite a bit of rugby there it was my cricket which came on the most in that time working with the then Director of Cricket Mike Powell [a former Warwickshire captain].

“After a couple of years at senior school I was keen to head down south to try and take my rugby to the next level and Mr Powell, along with some other people I respected, said that Rugby School in the Midlands would be a good option for me.”

Muncaster followed up on that idea and was awarded a half rugby/half cricket scholarship to the school where William Webb Ellis is said to have invented rugby back in 1823.

As much as he loved cricket - Muncaster played at district age-grade level in Scotland and had a couple of trials at Middlesex - within a few months of starting at Rugby School, his focus was on the sport he plays today.

At the school, Muncaster worked closely with Director of Rugby Mike Bayly.

As a player, the South African turned out for Western Province and Boland and when he arrived in the UK a few years ago, he already had a strong coaching CV.

“He is a very humble man who makes you understand why you are putting in the work and he used to say to us ‘if you get it right off the pitch, you will get it right on the pitch’,” Muncaster said.

“That phrase has always stuck with me and it really means that you have to carry yourself properly on and off the pitch if you want to achieve your goals.

Cannot wait to get started with Edinburgh! Absolute honour to be a part of this club. https://t.co/4yKv1luXzN

“Rugby School has a link with Leicester Tigers and I was lucky enough to join their Academy set-up when I was 14.

“I had played in the backs growing up, but from that stage - thanks to my East Lothian coach in Scotland Fergus Pringle [now Watsonians Super6 head coach] - I became a back-row because I played a game there and loved the contact and I did not look back.

“The environments at Rugby and with Leicester were excellent and I just had to be fairly well planned in terms of my preparation to make sure I could balance my rugby commitments with my education.

“Highlights include playing for the school at the Wellington Festival when we were in the under-16s and I made many good friends in both environments.”

Muncaster, who has played for Scotland at under-16 and under-18 levels to date and now has his eyes on an under-20s call-up, recently received his A Level results and hopes to attend university in 2020/21 alongside his rugby if time allows.