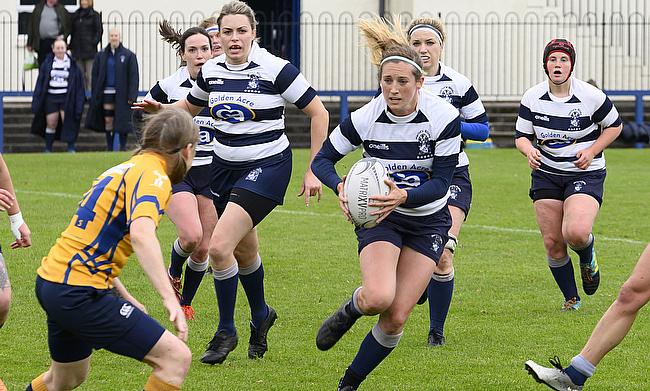 Scotland winger Annabel Sergeant had a weekend she’ll never forget last time out, but this one coming up is set to be equally as memorable.

On Sunday, she helped her Heriot’s Blues team defeat Glasgow University 74-5 at Goldenacre to see the Edinburgh side lift the Tennent’s National League Division One title.

Sergeant, 31, did not have too long to celebrate claiming the silverware because on Monday she was making her way down to Cardiff to join up with the Barbarians squad ahead of the women’s and men’s double header against Wales in the Principality Stadium on Saturday.

The women’s squad assembled for the select outfit by head coach Jo Yapp includes two Rugby World Cup winners - Steph Te Ohaere-Fox and Eloise Blackwell - and, in total, the playing group of 23 has over 430 international caps.

Players from Australia, Canada, England, Ireland, Italy, Japan, New Zealand, the USA and Wales are getting ready to team up with Scots Sergeant and Lauren Harris for the big match - and Sergeant, who starts on the bench, cannot wait.

?? “Women’s rugby is hugely important to the growth of this sport.”

Warren Gatland on the importance of our Women’s team as he presented their shirts tonight ????#Baabaas #rugby #rugbyunited ?? pic.twitter.com/iZwNqh3pHj

“I was surprised, but delighted to get the call to play for the Barbarians,” Sergeant told TRU. "A wee while back I got asked if I would be keen and straight away, I said ‘yes’!

“I have only been to the Principality to watch a few club matches when there was a ‘Judgement Day’ on in the Guinness PRO14, the atmosphere then was amazing so I can’t even imagine what it’ll be like on Saturday.

“The pitch is really close to the stands and you can really hear and feel the crowd so it will be a special day.

“It has been quite a busy spell because on Sunday Heriot’s won the league which was really good. The club is quite new, but ever since I came back from the southern hemisphere and began playing there last season, there has been a great buzz amongst the players and a nice atmosphere.

“There is also a nice atmosphere in the Barbarians camp and it is just great being around such good players and getting to know them better while we have mixed a lot with the men’s squad too.

“My parents and my partner are coming down to Cardiff for the game and I just can’t wait to be a part of it all!”

And the big question ahead of a Barbarians match: what socks will Sergeant be wearing?

“I believe the tradition now is to wear one club sock and one country sock so I have brought a Scotland one down with me and I will also be wearing a Ponsonby sock,” Sergeant, who was born in Plymouth and then grew up in East Lothian near Edinburgh, explained.

“I played for Ponsonby for three years whilst I was in New Zealand and a number of the other members of this Barbarians squad have also played for them [Charmaine McMenamin and Tess Gard’ner for example] so I thought it would nice to represent the club.

“It has been great catching up with some of the guys I played with and against over in New Zealand this week and it has brought back lots of good memories.

“Seeing Lauren has also been good because we played together for Scotland quite a few times over the years and it has been nice to hear what she has been up to in the last wee while.”

Lauren that Sergeant refers to is of course Lauren Harris, the former Scotland winger, who has been coaxed out of retirement for this big game.

In July, TRU revealed that she was hanging up her boots to set-up ‘The Badge of Shame Company’ which is advocating for a future with less judgement, less prejudice and more good humans through garments which have earned positive reviews so far.

However, the 30-year-old’s will grace the turf in Cardiff on Saturday as she starts in the 14 jersey and Harris, who plans to wear Scotland and Melrose socks, said:  “Jo Yapp used to coach me and she messaged me recently to see if I would be keen to play for the Barbarians.

“Of course the answer was yes, obviously I haven’t played a match since the end of last season and I wondered if I’d be a bit rusty, but I have been working hard on my fitness and it was an opportunity I couldn’t pass up.

“With the way things finished last year with my Scotland career coming to an end after the game in January against Spain, it wasn’t perhaps the way I wanted to end things.

“So, now to have this massive occasion to bring the curtain down on my rugby career is really nice and it means that my parents can come down and watch me in a brilliant stadium and make some nice memories to look back on.”

Barbarians Women play Wales in the Principality Stadium on Saturday at 11.45am, followed by the Barbarians Men versus Wales at 2.45pm