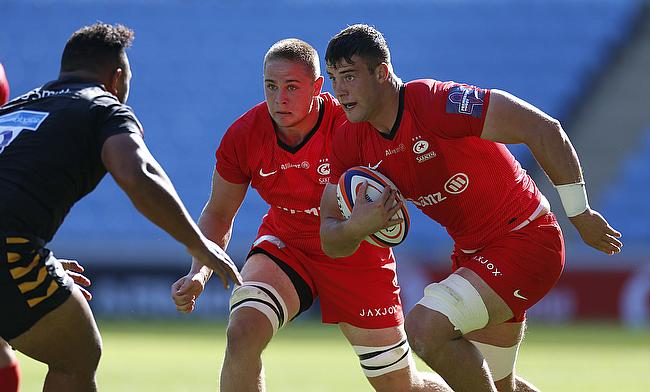 Brad Barritt to leave Saracens at the end of 2019/20 season
'What might have been': Moore looks back to the day Scotland scared the All Blacks
Callum Hunter-Hill signs permanent long-term contract with Saracens
‘Playing in a World Cup in New Zealand would be a very special moment’

During the current pandemic, young talents up and down the country have been anxious about securing their immediate rugby futures at a professional level.

Former Scotland under-20 skipper Callum Hunter-Hill was one of those until Saracens - where he has spent a successful 2019/20 on loan - confirmed his permanent signing on a three-year contract.

As well as nailing down his rugby pathway, Hunter-Hill has also been busy in recent weeks working out what he wants to do off the pitch and, as well as playing for Sarries in the Championship during 2020/21, the second-row will be starting his studies in history at King’s College London.

Having begun a geography, archaeology and classical studies degree at Glasgow University in 2015 when he was in the Glasgow Warriors Academy set-up and playing for Scotland under-20s, Hunter-Hill feels he has unfinished business when it comes to education.

“During that 2015/16 season, I was trying to juggle a few things and at the end of my first year at uni I was advised by the coaches that it would be hard to keep going with the degree if I wanted to push on with my rugby in 2016/17,” Hunter-Hill told TRU.

“That was a bit tough for me at the time because I was enjoying my studies, but I also really wanted to keep the rugby going on an upward curve and so I stepped away from the course.

“As a result, four or so years later, I am delighted that I will be starting on a history degree course at King’s after the summer and that Saracens have backed me to do that.

“Rugby can be all consuming, everyone needs other hobbies and interests away from training and games and I have always loved history and diplomacy so I really wanted to give uni a go again.

“I believe having another focus away from rugby will really help my game and keep my mind fresh for what will be a big year for us in the Championship, so hopefully it will be a ‘win-win’ situation.”

“I’m here for the long term and I am buzzing”

Last year when he walked into the Saracens training ground in St Albans for the first time, Hunter-Hill admits he was a bit starstruck, but was soon made to feel like ‘one of the squad.’

“When you arrive and there are guys there like Owen Farrell, George Kruis, Maro Itoje and loads of other internationals around it can take some getting used to,” the player, who will be sharing a flat with winger Ali Crossdale going forward, confirms.

“However, everyone at Saracens has made me feel at home from day one and the fans are just amazing.

“Obviously the club has gone through some strange times in 2019/20, but no one has ever moped about and it has been so refreshing to see how re-focused and energised everyone has become about the challenge we will face when we drop down from the Premiership to the Championship.

“We know that every team will be out to take our scalp in that division, but the standards that are set here are so high day in and day out that, despite some personnel changes, we will be very much ready to hit the ground running whenever the next season does get the go ahead. I’m here for the long term and I am buzzing.”

Hunter-Hill grew up in East Lothian and played at the rugby club in North Berwick and went to North Berwick High School for one year before moving to Stewart’s Melville College in Edinburgh.

“Rugby was always the sport I loved, but I perhaps didn’t really feel totally confident and didn’t give my all to the game until later in senior school,” he recounts.

“I was not that tall and played hooker and prop heading through the ranks until one summer I had a massive growth spurt and suddenly second-row was the position for me.

“In my fifth year [second last year of school] the coaches moved me to the second-row, but I was still eligible for the under-16s at the time and I was on quite a learning curve.

“The coaches - Bryn Lockie and Jimmy Moran - put a whole lot of faith in me and in my final year of school, things really took off rugby-wise.

“I was playing regularly for the school first XV and was then into the age-grade squads with Scotland and the coaches there - Ben Fisher and Eddie Pollock - also helped me a great deal.

Long-awaited start for @duncantaylor3 ??
First @premrugby start for @callumhhil ??
14 of the match day 23 hail from the Academy ??

For full team news head to the website ?????? https://t.co/DFMSBywgQb pic.twitter.com/Imihw44eCG

“Eddie in particular has been a great sounding board and mentor for me throughout my career and they gave me confidence to really take my rugby to the next level.”

During his first year out of school, Hunter-Hill played for the Stewart’s Melville club and captained Scotland under-18s. He then went on the Macphail Scholarship to New Zealand with Ben Robbins in the summer of 2015.

Next up was the move to Glasgow for university and into the Warriors Academy and during 2015/16 and 2016/17, he earned 19 international under-20 caps and skippered the side whilst also spending a loan spell with London Scottish.

A first full-time professional contract then came at Edinburgh Rugby ahead of 2017/18 for the player who has also turned out for Stirling County and Newcastle Falcons over the years.

With the likes of Grant Gilchrist, Ben Toolis and Fraser McKenzie ahead of him in the pecking order at Edinburgh, regular game time did not come, but the loan move to Saracens reignited his career.

“As a local lad it was an honour to be at Edinburgh for a spell and they have such a strong squad now that there is no reason why they cannot go on and win the delayed 2019/20 PRO14 and even the Challenge Cup,” he stated.

“I still have friends there who I keep in touch with and hope they do well, but my stay there is behind me now and I am just focused on an exciting future.”

Callum is also writing a blog so have a read here: medium.com/@callumhunterhill