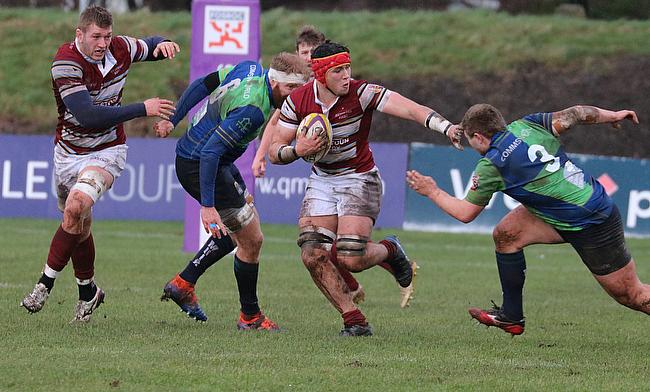 Spencer loving life at Jersey and looking forward to an exciting 2020
Jack the lad: Owlett buzzing as he aims to impress at Wasps in 2020
Greig Laidlaw retires, but there should be no emergency at scrum-half for Scotland
Stuart McInally: “I needed a bit of time to breathe and not think about rugby”

In just over three weeks time, the best young players from Scotland, England, Ireland, Wales, France and Italy will begin to battle it out in the under-20 Six Nations.

And one player to watch out for in the dark blue of the Scots is certain to be Watsonians back-row Connor Boyle.

He does not turn 20 until next month, but he has made quite an impression in Scottish rugby circles since he left school in the summer of 2018 and, most recently, earned back-to-back player of the match awards in a double header in the FOSROC Super6 against the Boroughmuir Bears just before the festive break.

During 2019, openside Boyle captained the Scotland under-20 squad which had Carl Hogg at the helm. It was not the best year for the youngsters, finishing bottom of the Six Nations table and then being relegated from the World Championship competition, but he is determined to help this year’s crop put in better showings under new head coach Sean Lineen.

“I have been juggling a number of things over the last few months, but I just take it in my stride and try and improve all the time,” Boyle, 19, told TRU.

“Playing in the new FOSROC Super6 competition with Watsonians has been excellent because it has exposed me to a higher level of rugby week in and week out and tested me and it has allowed me to take what I have learnt there into training with Edinburgh Rugby.

“As a stage three Academy player I have been lucky enough to have been training with Edinburgh nearly full-time and being exposed to that environment can only be good for young players like myself.

“Just to be in and around players like Hamish Watson, John Barclay, Jamie Ritchie, Magnus Bradbury, Bill Mata and others has been really good for my development.

“The first thing that strikes you about all of the guys is just how down to earth they all are and once you get over the fact that you are working alongside them and not watching them on TV then you just get on with the job in hand.

“The second thing you notice is the way they carry themselves, their work ethic and their attention to detail. At the very top level everything is about the small details and with forward play in general and the breakdown area changing all of the time it is great to be around them.

“Learning from coaches Richard Cockerill and Steve Lawrie is also excellent because they have been there and done that.”

On top of training with Edinburgh and Watsonians, Boyle has been continuing to work hard in his second year of a business orientated degree at Heriot-Watt University in the last few months.

“It can mean busy days at times and I had some exams in December, but I want to work on something away from rugby too and if you plan your days and weeks correctly then you can make it work,” Boyle stated.

Boyle played most of his rugby growing up at Stewart’s Melville College in Edinburgh and made his way into the senior first XV.

During 2017/18, when he was in his final year at school, he captained Scotland under-18 in the Six Nations Festival in Wales and he also gained some senior experience by playing for the Stewart’s Melville club.

Throughout that year, he was a stage two FOSROC Scottish Rugby Academy player and, given the form he was showing, it was no surprise when he was upgraded to a stage three player on leaving school in 2018.

“All of the experience I had with the school team, the under-18s and Stewart’s Melville left me feeling good heading into that summer and I was keen to keep my rugby going,” he said.

“I joined Watsonians when I left school because I had worked with [then head coach] Steve Lawrie before when he was my coach at school and also with Scotland age-grade sides.

“The guys all welcomed me into the club and last year, I just tried to learn from the experienced guys around me like [former Scotland Sevens cap] Michael Fedo, while myself and the other younger back-rows like James Miller and Gregor Nelson helped each other on and pushed each other to get better.

“It took a couple of weeks to get used to the physicality of the Tennent’s Premiership, but I enjoyed the challenge and that first year in senior rugby taught me an awful lot.”

“We have to be focused”

Now we are into the New Year, Boyle cannot wait to get involved in another under-20 Six Nations campaign and he believes the players in the group who are coming back for their second year need to lead by example.

It remains to be seen who will be captain, but certainly the likes of Boyle, hooker Ewan Ashman, second-row Cameron Henderson, scrum-half Roan Frostwick as well as back three men Jack Blain and Ollie Smith will have important roles to play.

“Last year’s under-20s experience taught me a lot because there were highs and lows and it also showed us as aspiring young players that you have to be focused on every single game and not get ahead of yourselves or you can be caught out,” he stated.

“I am not going to lie, the World Championship experience [when the Scots were relegated to the second tier event in Argentina] was tough for me as skipper.

“However, I managed to get a couple of weeks off after that, clear my head and refocus ahead of 2019/20.

“There is no doubt that we have a lot of talented young players in Scotland and it is up to us slightly older ones to lead well and create a good team and squad environment with the newer boys because we will face five tough games I quick succession and we have to be ready for that. It is an exciting challenge.”

The under-20 Six Nations starts on January 31, Scotland are away to Ireland that evening