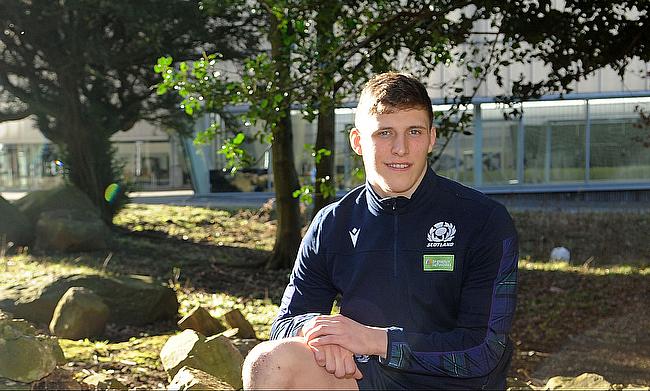 Boyle-ing point: Connor on top form ahead of a big couple of months
Spencer loving life at Jersey and looking forward to an exciting 2020
After Cokanasiga masterclass, Anderson is focused on stopping Fiji in World U20s
From sitting school exams one week to facing the haka the next: Rory’s remarkable rise

An 18th birthday is a milestone in all of our lives and Rory Darge is unlikely to ever forget his.

It was February 23th 2018 when the young prospect came off the bench for Scotland under-20s in the 49th minute as they caused an upset to defeat their English counterparts 24-17 at Myreside in Edinburgh.

The calendar year of 2019 was tough for back-row Darge because of injury, but now he is fully fit and he will return to Myreside on Friday evening.

This time, a couple of weeks short of his 20th birthday, he will captain the Scotland under-20s from No.8 as they again take on England in the second round of this year’s Six Nations.

“I have great memories from the win two years ago,” Darge, 19, told TRU.

“My debut was against Wales [in week one of that year’s age-grade Six Nations, a 36-3 loss] and although it might seem strange the most memorable match was against France [in round two].

“We got a real doing at Broadwood [69-19], that was a really tough experience because you've got family there watching and things, but it was a big part of the learning curve and we beat England in the next game.

“Beating England at Myreside again would be massive. There will be a lot of my family there watching. A few were there last time and said how much they enjoyed it so there will be even more this time, it should be a great occasion.”

Scotland opened up their U20s Six Nations campaign with a 38-26 defeat against Ireland in Cork, but Darge feels his side can take some plus points into their clash with England.

“There were definite positives last week in Ireland,” he added. “I think we were physical, the scrum was a weapon for us which doesn't happen very often for age-grade Scotland sides, but we conceded 38 points so there's been a lot to work on this week.

“There was a lot of little mistakes - we missed a tackle in Ireland's ‘22’ and they scored off that phase, so for some guys it's learning that small mistakes at this level mean big consequences, so it's just coming to terms with that.”

Darge is the latest talent to come out of the East Lothian town of North Berwick.

The likes of Lewis Carmichael, Chris Dean, Callum Hunter-Hill, Tom Brown, Harvey Elms, Liz Musgrove, Annabel Sergeant and Megan Gaffney - all playing at the top level currently - are from there too.

Darge said: “The coaches at junior level just made it fun for us at North Berwick, sometimes youth coaches think it [rugby] is too important and make it too serious, but it was just fun at the club and it was run by volunteers. It is just a really good environment.

“I played club stuff in the minis there then mainly school rugby at North Berwick High School before moving to Melrose.”

Darge made an immediate impact when he arrived at The Greenyards a few years back and is now in the Southern Knights Super6 squad.

“In January last year I dislocated my kneecap but I didn't do that much ligament damage playing for Melrose against Stirling County at Bridgehaugh.

“It took me a long time to recover because the swelling wouldn't go down and, in total, it was about nine months out, but that was longer than it should have been.

“I then had some issues with my ankle at Bridgehaugh again at the start of this season with the Knights. The ankle put me out for about a month, it was just a rolled ankle but I’d torn the ligaments, but now I am fully fit.”

“Being captain is a massive privilege”

After those tough times on the sidelines, last year for FOSROC Scottish Rugby Academy player Darge - who regularly trains with Edinburgh Rugby - to be named under-20s skipper by head coach Sean Lineen for this tournament was a big boost.

Your Scotland U20 team to take on England this Friday night at Myreside Stadium in Edinburgh (kick-off 7.30pm). Get your tickets at https://t.co/UmzC50IoFP. #AsOne

“It is a massive privilege and even more so having missed last year,” he stated. “Watching the boys last year was quite tough so when Sean said he wanted me to be captain I was delighted.

“I am captain, but there are so many guys in the group who will take a lead, Connor Boyle was skipper last year, Ewan Ashman played last year, Robbie McCallum and someone like Nathan Chamberlain who played last year - and controlled the game well from stand-off versus Ireland last week - are all part of the leadership group.”