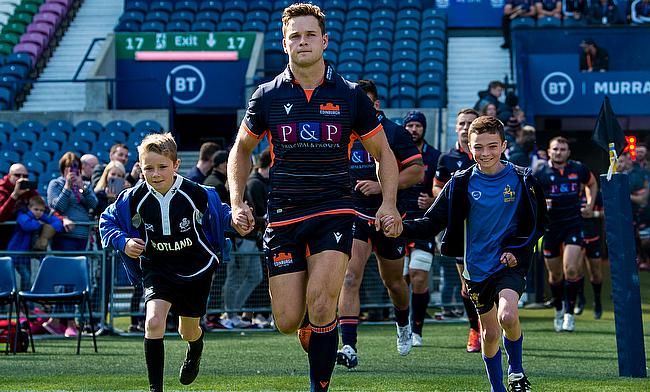 When Edinburgh Rugby’s Chris Dean picked up an injury against the Ospreys in a pre-season friendly last September, none of us could have imagined that the 2019/20 rugby campaign would still be ongoing 11 months later.

It is, however, and centre Dean is pretty happy about that because he is now fully recovered from the pectoral issue that put him on the sidelines for four and a half months. He feels refreshed and raring to go as his side bid for the Guinness PRO14 title and of late, he has been able to spend some quality time with daughter Arabella and partner Naomi.

Arabella was born in early November last year, giving Dean the perfect tonic as he recovered from surgery and he sees the recent lockdown break and the subsequent phases as a blessing in disguise.

“I have certainly been learning the dad roles pretty well, especially in lockdown when I wasn’t training and was put to good use elsewhere,” Dean, 26, told TRU.

“The amount of help I was able to give was more than usual and I was getting up at nights to help my partner with the baby without the excuse of having training the next morning!

“Honestly it has been a massive silver lining having Arabella around, it has helped me to deal with the injury I had and then lockdown was so much better with the focus being on her.

“I look back at the lockdown as a really positive time for me, being able to spend time with my daughter and rest the body. It has reignited my passion to get back and get stuck in on the pitch - starting this weekend.”

Dean did return from injury in late January, but played just 80 minutes over two games before Covid forced a shutdown of everything in the UK on March 23.

As a result, the PRO14 season has been condensed somewhat with just two regular season rounds left and then the semi-finals and final.

Edinburgh are currently top of Conference B and are on course for a home last four tie, but over the next week, they have to face old rivals Glasgow Warriors twice at BT Murrayfield.

The Warriors have a very outside chance of making it to the play-offs from Conference A while their players will be out to impress new head coach Danny Wilson on Saturday and then on Friday, August 28.

Ahead of the first game between the two - after which the winner will pick up the 1872 Cup - Dean said: “It won’t be too hard to get motivated in defence and attack as we have a huge amount to play for and Glasgow do too, they will want to beat us.

“There is always the motivation of the derby rivalry which adds that extra spice and it is certainly a good way to kickstart things. Everyone is looking forward to it and hopefully will be a good spectacle for fans watching on TV.

“I think this is now our standard [competing for trophies]. That is pushed on us by the coaches, but also by the playing group too as now we know we can play at this level consistently.

“Now it has to be our standard and we have to push on to those marginal gains that move you from being a really good team to being a top, top team in our league.

“We have done the big stride in the last three years, now we have to make the smaller differences to be a regular top six, top four team and that is certainly where we want to be to push on.”

After the PRO14 title bid Edinburgh, still have a European Rugby Challenge Cup quarter-final to play next month with Richard Cockerill’s men away to Bordeaux on September 19.

“Something like Covid shows how fragile the sport can be”

In recent times, we have heard from countless players about how key it is to plan for a future after professional rugby.

Dean, a former Scotland under-20 and Sevens cap, has been studying business management at Edinburgh Napier University part-time for the last six years.

He should complete the degree in the summer of 2022 and Dean said: “It is increasingly important to have things out of rugby because something like Covid shows how fragile the sport can be.

“It is paramount now that younger players do take up extra-curricular things because the uncertainty surrounding the sport going forward is one to be wary of, you have to back yourself up in the downtime we get.

???? "Edinburgh have won their last five Championship encounters and have won six in succession just once since 2009."

?? Get the inside line with this week's match preview.

“I still plug away at university, I have been doing that part-time for six years now so I am coming hopefully towards the end and there is light at the end of the tunnel.

“Covid has meant that studying is now online. Before I would have to try and attend lectures and do a lot of book reading myself when I missed classes, but with it being online, it benefits folk with other jobs and commitments, I won’t have to travel to the Craiglockhart campus regularly, I’ll be able to sit at home and make sure I get my work done.

“It will be a lot to juggle going forward. Rugby is going to be full on for the next 12 months at least and now we have Arabella, but it is all about routine and structure and we’ll get there.”