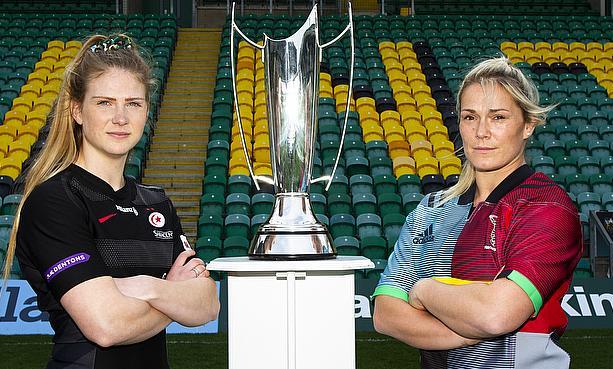 The third season of Tyrrells Premier 15s was launched on Monday in Leominster with players from all the 10 clubs visiting Tyrrells Court Farm.

Representatives from all the clubs converged for a photo session and interaction with media with the tournament set to kick-off on 21st September.

“I think teams really know what they want to be delivering and have worked hard on their summer signings. Each team is going to be more competitive than they were last year, so I think we’re in a good place.

“The more competitive the teams are, then that’s ultimately where we want to get to, because every player has got to work really hard on the pitch, and everything they do counts to something at the end of the year.

“The whole league, the whole support that we’ve had from Tyrrells is fantastic in terms of helping to move the league forward. It’s nice to have a title sponsor for the league that’s now become really synonymous with the division. They’re a developing brand and it’s very much where we are in terms of the league and growing that, so I think there’s lots of positives moving forward.”

Saracens' Sarah McKenna, who was part of the title winners last edition is excited about the new season.

“I’m incredibly excited for a new season, as always. In the off-season that boiling pot slowly builds up to the week before the game, so we’re just below boiling point at the moment, but raring to go when it comes.

“On the pitch the standard has gone up massively. Week-in-week-out, you’re having to do huge shifts one after another, and I think the depth in the squad comes through at that point. At the end of last season we were struggling because we had a couple of major injuries and had to shuffle people around.

"I know that we still came out strong at the end, but a few years ago we might not have had that depth, so it just goes to show - where the game has come from - that we can do that and so many other teams can do that too.

Davinia Catlin: Excitement of being professional is definitely going to pull some players