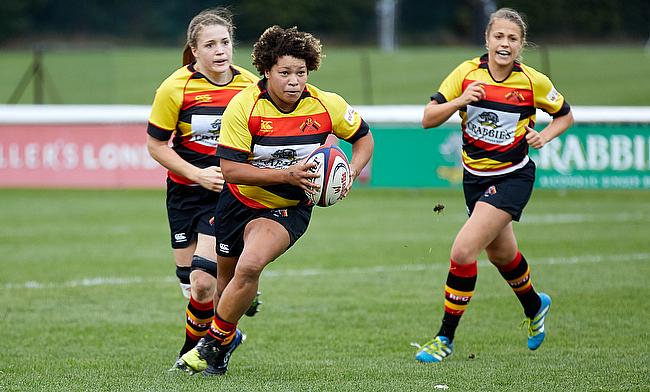 At the beginning of last month, Richmond were omitted from the Tyrrells Premier 15s line-up for the next three seasons and forward Laura Kapo may have felt the disappointment more than most.

Kapo has been associated with the London-based side for over 17 years, but she admits it is ‘gutting’ that one of the most decorated and oldest clubs in women’s rugby will not be competing at the elite level until at least 2023/24.

Richmond were unsuccessful in its bid to remain in the Tyrrells Premier 15s and the Red, Black and Golds’ frustration was also shared by Firwood Waterloo who suffered the same fate.

“We are one of the most decorated, established and successful clubs so it is quite gutting that a club that was instrumental in the evolution of the women’s game and in founding the RFUW [Rugby Football Union for Women] won’t be competing in the Tyrrells Premier 15s,” Kapo told TRU.

“We founded that and founded the competition as it was before the Premier 15s reshuffle so it is quite upsetting from that perspective because a club that has been so pioneering and so involved and instrumental in the game is going to be cast aside and dismissed. It is extremely disappointing.”

"In the faltering but heady years when women’s rugby started booming in the 1990s, Richmond were probably the biggest & best club, training like mad when the rest were still jogging, producing many great England players" - @stephenjones9

The two teams replacing Richmond and Waterloo for the next three seasons will be Sale Sharks and Exeter Chiefs, who have both been backed heavily by their respective men’s Gallagher Premiership clubs.

“I think part of that is positive although it comes at the detriment to ourselves,” admitted Kapo who also acts as Richmond’s chairwomen.

“It is good that there will be a little bit more onus on clubs to continue to develop their players and reward their players whether that is financially supporting them so England don’t necessarily have to. That would be great, but it comes at our cost which sucks a little bit.”

Over the last 16 months, the influence the Red Roses have had on the landscape of women’s rugby in England has certainly had an impact on creating this feeling of a new dawn for the Tyrrells Premier 15s.

With the national side made up of players who solely compete in the top division, Kapo admits a club like Richmond, which has produced many stars in the past, are resigned to losing some of their current players who harbour international ambitions.

“For us, we have always been a bit of a pathway club for players who are aspirational towards playing at international level and that’s not just necessarily for England,” said Kapo, who received the Woman’s Player of the Year award in 2019.

“I can’t tell you off the top of my head because I will have to look at our international board, but I think we have got something like 141 internationals up there who have represented their countries across 21 different nations.

“England have got evidence that they now only pick their players from Premiership clubs so if you want to be playing internationally, you need to be playing at a Premiership club. Some of the players who have been playing for us for years and some of our younger girls are now having to cut their time short at the club because they have to in order to play internationally.

“You can see where the Red Roses full-time contracts [which were introduced in January 2019] have made teams stronger. If you have got 28 girls who are contracted by England and they are in an England camp for training, they are then released back to their clubs and they have got the freedom of not having to work.

“You then have seven or eight girls from the Red Roses, all back in training and in the gym and they will have a positive impact on those girls that are not contracted because of that professionalism. You then have the squads who don’t have those players who are contracted and they, in a way, are being left behind.”

After this next three-year cycle, Kapo is keen for the Premier 15s to inject some change into the current structure of the league by increasing the number of teams competing in the division from 10 to 12.

This would present an opportunity for Richmond to re-join the top flight but whilst Kapo hopes the women’s game can keep evolving, she insists the club will not be veering away from its core values and beliefs.

One of Richmond’s board directors, Laura Jenkins, told the Telegraph the club will continue to invest in the community game whilst Kapo added Richmond will also maintain their ‘off the field work’ with players, despite not being involved in the Premier 15s.

The London outfit help players plan for life after rugby by networking within the club’s 3,000-strong membership and Kapo is looking forward to being a part of the next chapter in Richmond’s illustrious history.

“We, and I, are massively driven,” she said. "This is a little blip in what has been a very rich history otherwise. I have got masses out of my time at Richmond and I am committed on giving back to the club to leave it in a better place than I found it in or a least make my mark to help the next generation.

“I benefitted massively from the players that came before me, from their experience and from their involvement and what they strived for so I feel like it is my responsibility to do the same for the next generation coming through.”

Belated posting, but finally made it back to the pitch and loved being bossed about by this one for 40 mins + a warm up (yes I warmed up!) What a great player you have grown into and so proud to be playing alongside you finally! Next time though - let's do it on grass! ???? #rugrat #halfmyage #lovetherugbyfamily #ThisIsRichmond #LondonScottishGirls #Isurvived #7 and #8 ?????

Kapo, who is currently in the remission stage following a four-year battle with sarcoma – a form of soft tissue cancer, is also looking forward to being back on the pitch with her teammates.

She added: “I am just at home at the moment which is a bit frustrating because I would have been dancing around doing whatever I want! Lockdown does feel like it is delaying remission celebrations but it just means it is going to be very messy the other side!

"The challenge of the new season has given me a new focus and it is a new chapter so I am looking forward. I can’t wait to get playing and training with the girls or just to have a beer with them instead of doing it over Zoom! We are all relishing the challenge next year.”

Exclusive: Katy Daley-McLean - “We now have the opportunity to go to Italy and finish with a Grand Slam