Davinia Catlin: Excitement of being professional is definitely going to pull some players 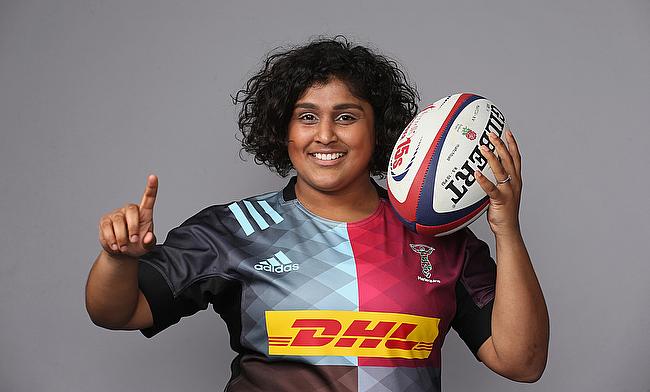 Lauren Delany: I wouldn’t be where I am today if it wasn’t for Waterloo
Darren Lamon: 'We see this opportunity as completing the Sharks family'
RFU invite clubs for next three seasons of Tyrrells Premier 15s

Since joining Harlequins for the 2016/17 season, Davinia Catlin has become a club stalwart. A combative hooker, Catlin also runs an independent sports shop in Croydon called The Winning Margin.

Starting her rugby journey as a five-year-old at Sutton and Epsom RFC, Catlin’s sporting ambitions took her down a number of avenues before rugby became the number one choice. Fascinated by the 2000 Sydney Olympics, Catlin took up judo, competing nationally in the sport.

Alongside judo, Catlin was a keen netball player as she competed for Surrey, however, ultimately it was rugby that won outright. It was the first sport which Catlin played, the sport that had given her the opportunity to travel the world with the England U20s.

“It was always my aim to play for England,” Catlin said. “I really wanted to get to the Olympics. I think it was the Sydney Olympics in 2000, I remember sitting down and watching thinking ‘this is amazing’. What it came down to was; success helps enjoyment.

“When I was of the age of making a certain decision, netball for me, I felt like at five foot four, I wasn’t going to grow very much and I didn’t, so that was a sticking point for netball. But for judo, it was a big decision between rugby and judo, but I like to think I made the right decision.

“I’ve not played for England Women. I’ve not represented England for a full cap and that’s always a disappointment, but in everything you do, you look for the positives. I have only ever played junior representative, it meant I was able to travel the world and do things that a lot of other players have been unable to do.”

The RFU has confirmed the clubs invited to participate in the Tyrrells Premier 15s division for the 2020/21-2022/23 seasons.

Having seen women’s rugby grow before her eyes, when Catlin joined the club in 2016, it was not the first time that she had worn a quartered shirt. As a 16-year-old, Catlin toured with the club and as a south Londoner, when Quins came calling again, there was no way the hooker was going to decline the opportunity.

“If you go to the rugby club I grew up at, Sutton and Epsom, everyone has got a Quins shirt on,” Catlin said. “Being a south Londoner, that’s our club. It was a very easy decision to make because I wanted to play for the club.

“It was close to where I live and playing at The Stoop is the most incredible experience you can feel. To have the majority of our home games played at The Stoop, it’s really nice to be appreciated by the club and it’s quite difficult to get two teams playing on a grass pitch. Every time I walk out of that tunnel, I am excited.”

Working a variety of jobs in London before starting her company, The Winning Margin, Catlin like so many players in the Tyrrells Premier 15s is part-time. Increasingly, there is a narrative that the women’s game will one day soon be wholly professional.

TRU columnist Kate Alder has previously written about players prioritising part-time rugby over their full-time professions. It could be thought that owning your own business could give a player, such as Catlin, more time to focus on rugby, however this is not the case.

“I think it was a lot easier working for someone else,” Catlin said. “You get set lunch breaks, hours to come in, hours to leave. When you are running your own business, I don’t have a lunch break, if something needs to be done until late, we work it.

“I have worked in the city and played Premiership rugby. I am now running my own business and it falls down on you. It’s your responsibility, you have no one else to lean on. It’s much harder, probably a lot more emotionally draining running a business.”

More recently, it has been announced which teams in Tyrrells Premier 15s are being retained for the next three years. Added to the competition were Sale Sharks and Exeter Chiefs and with both clubs have strong links to professional sides, the spotlight on players to perform becomes greater.

As a result, players could be more inclined to prioritise rugby over their day jobs with the confines of the pitch much more appealing to them and already, Catlin believes players are choosing rugby over employment.

“I do think that it’s going to be a challenge for a lot of players and I think the excitement of being professional is definitely going to pull some players,” Catlin said. “I know for sure there are players who do jobs so that they can train, so that they can play rugby and rugby is their first and foremost thought when they are getting a career.

“That’s not just rugby, that’s women’s sport in general. A lot of women’s sport faces the same problems. One day, maybe it won’t but I’m not sure it will be in my career.”