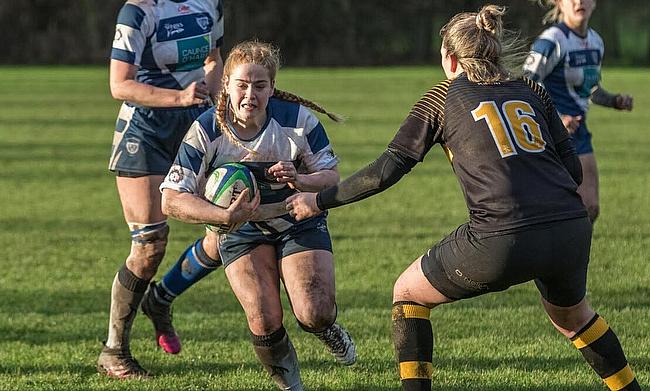 Howat not feeling sheepish as she prepares to test herself in the top-flight
Caity Mattinson on why Worcester Women will be ‘unrecognisable’
‘Playing in a World Cup in New Zealand would be a very special moment’
Darren Lamon: 'We see this opportunity as completing the Sharks family'

Players and supporters at all levels up and down the country are getting excited as rugby starts to slowly return after lockdown and one squad who will be eager to get going are Sale Sharks Women.

That is because they are a completely new group who want to show everyone what they are all about against the best female sides in the Premier 15s.

The Sharks head of women’s rugby Darren Lamon brought in three Scotland internationals in the shape of scrum-half Mhairi Grieve, second-row Nicola Howat and back-row Lucy Winter a few months back and he has added to the ‘tartan feel’ around the place by recruiting up-and-coming hooker Hannah Kurtz to the squad.

Kurtz, a former Scotland under-20 cap, is fully focused on using season 2020/21 to help her hit new heights as a player with the Manchester outfit and, if all goes well, try to catch the attention of national team coach Philip Doyle.

“Having played age-grade rugby for Scotland previously and knowing a lot of the girls who have gone on to play internationally, it is obviously a big aim of mine to play for my country going forward, but I know that will only ever be on the horizon if I am playing well for Sale Sharks,” the 23-year-old told TRU.

Birch:”I’m looking forward to challenging myself.”

“That means that at the moment all of my focus is on the Sharks and this exciting new adventure with a new-look squad.

“Some might think it will be tricky heading into a top-quality league with a brand new squad, but I think it is great because we can all build a culture and work ethic together and make sure that we are ready to compete whenever competitive rugby does come back.

“So far we have only had a few socially distanced fitness sessions and for all of us, it has been like the first day at school or university because we have been introducing ourselves to each other and getting to know more about each individual.

“A situation like that can make people nervous sometimes, but I think everyone is just buzzing to get going and be part of this new journey with the Sharks and there are certainly plenty of very good players in this group.”

“I headed along to training and never looked back”

Kurtz’s rugby journey began when she played in the Minis at local club Broughton in Edinburgh as a youngster.

“I then didn’t play for a few years, but got into it even more when we were taught rugby in our PE classes at Craigmount High School,” she explained.

“My PE teacher then suggested to me that if I wanted to continue playing rugby, I should head along to the Murrayfield Wanderers club so I did that and they had a great age-grade programme in place there.

“I was 15 at the time and in the three years I was there playing for the under-18 team - alongside people like Lisa Thomson and Rhona Lloyd who have gone on to win a number of full Scotland caps - we won a number of trophies and it was great fun.”

After school finished, Kurtz stayed in the Scottish capital and headed to Edinburgh University to study for an applied sports science degree - and of course play rugby.

“I knew there was a great women’s rugby programme at Edinburgh University so in my first year I headed along to training and never looked back,” she said.

“There were so many good players and coaches to learn from there and we had a number of highs including winning the BUCS Championship trophy at Twickenham.

“Having competition for places also made me up my game in a technical position such as hooker and often I would try and get down to training half an hour early to work on my throwing and such like.

“During my time at uni, I was also pleased to earn under-20 caps and be part of the Scottish Rugby player development programme and I tried to take something from all of those experiences.”

And, after graduating in the summer of 2019, another new experience was to come Kurtz’s way when she moved south to play for Sale 1861 and work with the Sharks as a community coach.

“It was a big move for me to make personally away from home in Edinburgh, but it has all worked out well,” Kurtz stated.

“There was a great bunch of people at Sale 1861 and we managed to win our league in 2019/20 [lifting the National Challenge One title after a win over Preston Grasshoppers in late February] while working out in schools with youngsters with Sale was really rewarding.

“Now, having got my future secured, I just cannot wait for season 2020/21 to get going properly."