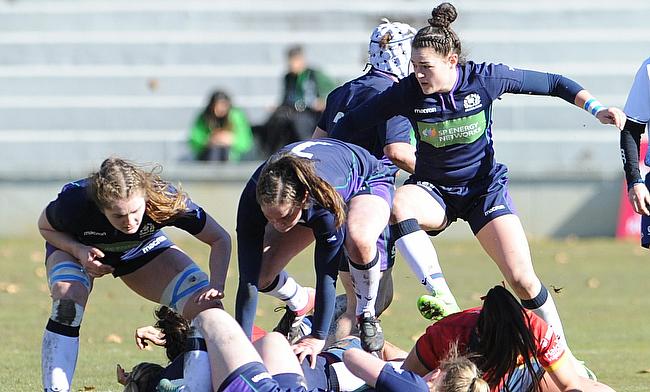 A return to competitive rugby in the UK may still be some way away, but Sale Sharks new recruit Mhairi Grieve is buzzing about the thought of playing for the Tyrrells Premier 15s newcomers in 2020/21.

Since it was announced back in early April that the Sharks would be playing in the top flight for at least the next three campaigns, head coach Darren Lamon has been a busy man piecing a squad together to challenge the more established clubs.

The signing that has grabbed recent headlines has been that of England centurion Katy Daley-Mclean as a player/coach, but others like centres Laura Perrin and Vicky Irwin have come in.

And when you think that Grieve - who has 18 full Scotland caps to her name and has played international sevens -could be at scrum-half, then that is quite a strong 9-10-12-13 base to potentially build the team around.

“It is really exciting to be involved in this new project with the Sharks. I think we are going to be very ambitious when rugby gets going again,” Grieve, told TRU.

“They obviously have a well-established men’s set-up and there are great plans for the women’s set-up so I can’t wait to meet all my new teammates in real life rather than over Zoom!

“When Darren Lamon got in touch, I knew I needed a new challenge, I am at that stage in my career and this chance has allowed me to take a step back from things, reset my goals and look forward to what is to come.

“As the days and weeks go by, I am sure Darren and the club will continue to announce new signings, but the names who are already on board are exciting and it will be good for my development to play alongside and learn from someone like Katy Daley-Mclean.

“We are under no illusions that the Tyrrells is a tough league and there are some quality sides in there, but for us it is about coming together as a group as quickly as we can and then showing people what we can do and I am honoured to be part of it.”

Now a Shark, Grieve’s rugby career began as a Rhino

Grieve grew up in the Scottish Borders and played for the Selkirk minis, known as the Rhinos, at a young age.

“I then didn’t really play in senior school, but took it back up when I went to Edinburgh University and I loved it,” she recounts.

“The set-up there was growing at the time and there were a number of players there trying to push on for representative honours and that helped me to take my game on a bit and I learnt a lot as a scrum-half just by playing regular matches.

“While I was at uni - and also playing some club rugby for RHC Cougars - I represented Scotland under-20s and then I was called into the Scotland set-up when I was 20 which was a great honour, but a big step up for me at  the time.

“It was a steep learning curve and I made my debut away to Italy in an Autumn Test in late 2014.”

When she graduated from university, Grieve moved down to Manchester to work as a vet and she has been based in the city ever since.

She played for Eccles for a short while, but suffered with injuries whilst there and then moved on to Firwood Waterloo.

“I moved to Waterloo because although they play in Liverpool about an hour away, they were just heading into the top flight at the time and I wanted to play at as high a level I could and test myself,” Grieve explained.

“It was great to suddenly be playing with an against the best week in and week out and I felt my game management began to improve. I enjoyed my three years at Waterloo and everyone there was really good with me.”

Every amateur/part-time sports man and woman knows how hard it can be to balance that side of their life with a career and leading into this year’s Six Nations, Grieve had a tough decision to make.

Last September and October, she had earned caps number 15 and 16 as Scotland impressed with two wins away in South Africa while appearances 17 and 18 came off the bench against Wales and Japan in the Autumn Test series in Glasgow.

“I love playing for my country, but working full-time as a vet and then travelling north quite regularly for training camps and the like was starting to become quite tough and it was weighing on my mind, it was hard to juggle everything,” she admitted.

“It started to feel like I couldn’t give 100% with Scotland and that is not the type of person I am so I made the decision before the Six Nations to make myself unavailable for selection. It was tough, but for me it was the right decision at the time.

“Who knows what will happen in the future, but for now during lockdown I am focused on working hard in my day job and keeping myself as fit as I can so I can hit the ground running with the Sharks.”