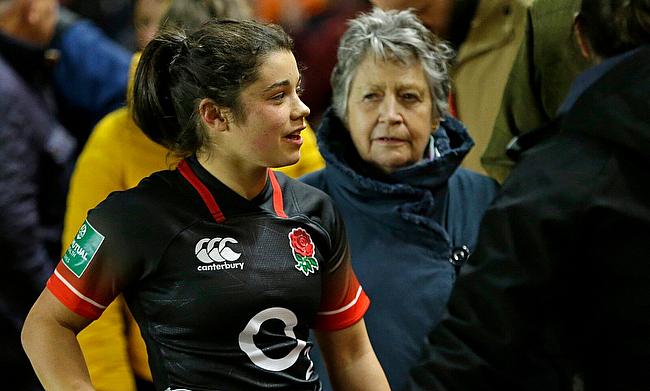 After a season spent coaching and playing in Canada, England scrum half Caity Mattinson was unveiled as one of Jo Yapp’s recruits for the 2020/21 season at Worcester Warriors.

TRU caught up with the England international, who was speaking from Vancouver Island, to learn why she has decided to come back and play in England.

It wasn’t too long ago that Worcester Women were on the Premier 15s chopping block.

Having finished inside the bottom three for the first three years of competition, Worcester will now be hoping that their fortunes can be changed with the arrival of former University of Exeter Women’s coach Jo Yapp.

Caity Mattinson has played for Yapp twice, firstly at England U20s level prior to joining the University of Exeter to do a masters. There was immediate success for Mattinson and her university teammates, winning two BUCS titles at Twickenham in a row before moving to Canada in order to coach at Westshore RFC. Now re-joining Yapp in the West Midlands, she is full of praise for her head coach.

“She’s an unbelievable coach and I was really fortunate that I played with her in the 20s for a couple of years and also went to Exeter,” Mattinson said. “My decision to go to Exeter was largely based on Jo being there as well because of the influence that she had on me. I just feel like she creates an environment where you can be autonomous.

“It’s like having a coach that one, feels really invested I you, but two, is willing to take on your opinion. She wants to challenge you, she wants to push you, but if I’m like ‘I think it might work like this’ or whatever, she is happy to take on what I think and it really makes you feel like you’re both trying to achieve the same thing.”

Yapp, who played at Worcester in the amateur era, also represented England at three Rugby World Cups. Like Mattinson, she was a scrum half and as a coach, has gained a reputation as one of the best in the women’s game, leading the Barbarians in November.

Worcester will in fact be Mattinson’s third Premier 15s rugby side, having played for Bristol and Darlington Mowden Park whilst attending Northumbria and Exeter, respectively. Having won two titles in Devon, Mattinson says that she in fact enjoyed playing university rugby a bit more than in the Premiership.

“I think the university rugby, for me, is a little bit more enjoyable than playing in the Premiership has been and that group of girls at Exeter was amazing and we had such a good couple of years down there,” Mattinson said. “It was so much fun and that environment was so professional.

“Keith Fleming and Jo together really allowed us to be a true high-performance programme at university level and that was really special especially with the men’s rugby there, you feel that you are part of something that’s quite important and everyone is achieving for excellence in that bubble and that is quite special.”

Since leaving Exeter last summer, Mattinson has been coaching and playing in Canada. With coaching something that she wishes to do in the future, it is not the first time that she has played her domestic rugby in North America.

“I did something similar three years ago in 2017 after I finished my undergrad.” Mattinson said. “It was just so freeing to play where no one was going to watch and I was just doing it because I love rugby and I came back from that in the best frame of mind that I have ever had and probably playing the best I ever had because I was just doing it for fun.

“That was when I got picked up for England and I do think a massive part of it was to not to be too concerned about how I play and stuff. When I finished my masters, I had some friends out here and my partner is also Canadian (Canada international Paige Farries), she has got a link with a club and they needed a backs coach for the season and to coach in the BC Premiership was really cool.”

Wanting to simply get her head down and further Worcester’s progression in the Premier 15s before even thinking about further her England claims, Mattision is now looking forward to the future at Sixways.

Now that Yapp has had more time to create the backroom staff that she wants too, her new scrum-half believes that Worcester are in a good place.

“I knew there was going to be a lot of changes with Jo going in there and that the people who are there right now are the right people,” Mattinson said. “They’re the sort of people that have no big egos, everyone that is there is going to get their heads down and work hard because we all want to achieve the same thing and that’s something really exciting to be a part of.

“I think that where Worcester are now and where they’ll be in a few years will be unrecognisable and to hopefully have the chance to be a part of and give everything that I can to that club is really exciting.”