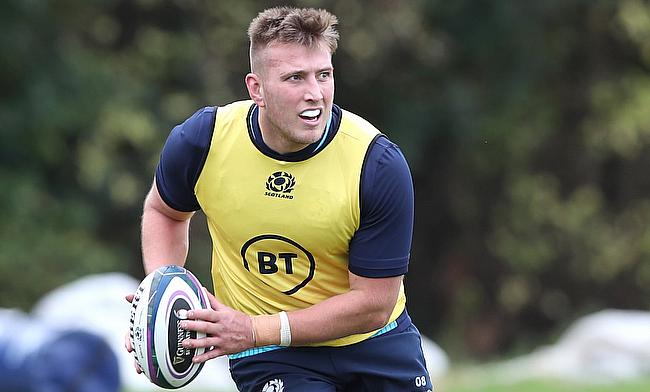 Matt Fagerson is facing up to arguably the biggest test of his fledgling career this weekend when he squares up to in-form Gregory Alldritt as Scotland host France in the Autumn Nations Cup.

With the Scots clash with Fiji - which was set to be on November 28 - called off earlier on Friday due to the amount of Covid-19 cases within the Fijian touring party, this match between the two Six Nations sides is effectively a ‘semi-final’.

Whoever wins at BT Murrayfield will be favourites to top Group B and progress to take on the Group A victors on finals weekend over December 5 and 6.

The France match also holds extra importance for Scotland because to date, they have only ever been victorious in six games on just two occasions. In 1925, they saw off France, Wales, Ireland and England before backing that up with triumphs over France again and Wales again a year later.

Fast forward towards the tail end of 1989 when Scotland defeated Fiji and Romania before winning the Grand Slam early in 1990 to clock up six victories once again.

Either side of lockdown, the current Scotland squad, being led by Stuart Hogg as captain, have defeated Italy twice as well as France, Georgia and Wales.

Proud of the boys. A brilliant result after a slow start.

Great to see @duncan_weir back pulling the strings ????‍?? pic.twitter.com/iDiEYpgPA5

They know that recording win number six will be the toughest of the lot because the last time they beat France back in March at the same stadium, the visitors were reduced to 14 players before half-time while Les Bleus are now up to fourth in the world.

For this match, Scotland head coach Gregor Townsend has recalled fit again Glasgow Warriors’ back-row  Fagerson and his battle with opposite man Aldritt will be key to the outcome.

Ahead of Fagerson’s eight cap, Townsend told TRU: “Matt started against Georgia [last month], picked up an injury and has done really well to come back and is now getting this opportunity.

“Now it’s up to Matt to show what he can do. He’s been in excellent form for his club and he works really hard in attack and defence and we’ll need that from him this weekend.

“No.8 is a position we’ve got three players in the squad for - Matt, Cornell du Preez and Blade Thomson - four when you count Nick Haining who can play there or at six and this time it is Matt’s chance.

“So, we want to see where we are when you take on the best teams because the wins are even more special. It has created a real focus and edge in training. It feels like a proper Six Nations game even though it’s in the Autumn Nations Cup because France are playing so well and they’re bringing their best players.”

Six in a row: “We’ve never mentioned it in at any of our meetings”

Most of the chat in the media north of the border since Scotland defeated Italy in their Group B opener has been about this team aiming to win six Tests in a row.

However within the camp, it has not been on the players’ lips every minute of the day, indeed it has hardly been mentioned at all if you believe the head coach.

“We’ve never mentioned it in any of our meetings or among the coaches,” Townsend stated.

“I couldn’t tell you if the players talk about it. We obviously know there has been momentum building and that's a good thing to have as a team because you have the confidence of winning and you feel like what you are doing through the week is leading to victories.

??? "Hugely motivated to take on one of the best teams in the world"

Head Coach Gregor Townsend talks us through his team selection for Round 2 of the Autumn Nations Cup against France at BT Murrayfield. #AsOnehttps://t.co/qQHhulzWj9

“We are playing a very good side this weekend who will challenge us in all sorts of areas so we’ve got to be at our best, and be at our best for 80 minutes. The challenge and opportunity this game provides is massive and whether it’s on the back of six defeats, one win, or no wins - it’s a great game for us to get stuck into.

“The opportunity is about winning this game and what that would mean to this group in terms of getting into the final [of the Autumn Nations Cup] to play for first or second in a couple of weeks’ time.

“France are one of the best teams, if not the best team, in the world right now, so that’s all we’re thinking about.”