“A Scotland team with smiles on their faces is pretty dangerous” 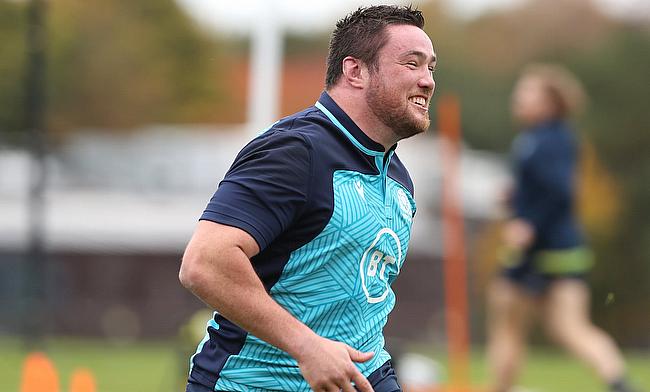 Match Report: Six Nations: Wales 10 - 14 Scotland
Scott the lot: “He is already very good - and the great thing for Scotland is that he can get even better”
Nelson: Scotland ‘can’t take foot off the gas’ after France draw
Zoom in for a debut try, Zoom chat with proud parents - now van der Merwe is focused on the Six Nations

Scrummaging and defence are two things in rugby that are not always associated with smiling, but by improving these parts of their game in recent months and putting in the hard yards, Scotland’s players left Llanelli with wide grins on Saturday night.

In the wider context, the 14-10 Six Nations triumph over Wayne Pivac’s men ended 18 years of hurt in Wales, but in the here and now it meant that Scotland had won three championship matches in a row and conceded just 59 points throughout the tournament.

Given where the squad were after a pool stage exit at the World Cup in Japan a year ago, it has been quite some turnaround and it means the Scots now head into the Autumn Nations Cup in fine fettle.

Two men who have played a big part in the turnaround have been defence coach Steve Tandy and scrum coach Pieter de Villiers while new forwards coach John Dalziel has made an instant impact since joining the coaching panel over the last couple of months.

“They have all made a big impact, they are all great men who have bought into the team ethos and the relationships they have with us as players is building nicely,” tighthead prop Zander Fagerson, the 24-year-old who has hit top form since the first lockdown, told TRU.

“I worked with John at Glasgow before and the way he has come into this camp [for the Georgia and Wales matches] has been great. He is good with the scrummage and I like the way he works.

"Full credit to the three guys coming in. They brought different structures and what not, but the guys bought into what they are wanting to do and they make it simple for us to buy in.

“They help guys to grow as individuals and as a unit and they are three great assets for Scottish Rugby.

“During the first lockdown, we did a lot of analysis and looked at lots of different teams and our maul was something that we thought we could develop. John has since brought in some new things and it is evolving and it is really great to be a part of that.”

And Fagerson, who now has 31 caps under his belt, believes a solid scrum is still a “powerful weapon” in rugby.

“I think massively, the World Cup final last year showed that, in fact it showed that set piece in general is as important as ever,” he stated.

“We are really lucky that Pieter came in for the Six Nations and he has been awesome to work with, all the boys have bought into what he brings.

“We want to drive that forward now as a pack. We are a really tight bunch with the common goal of doing well for our country. A Scotland team full of players playing with smiles on their faces is pretty dangerous and we are looking forward to the Autumn Nations Cup.”

Wins over Georgia and, more importantly, Wales, have seen a feelgood factor return north of the border, so with a couple of weeks until the Autumn Nations Cup starts here are some things head coach Gregor Townsend will be thinking about…

It remains to be seen how long Finn Russell and Adam Hastings are out for, but it seems like it could be a while so Townsend may well hand the keys to No.10 to Duncan Weir of Worcester Warriors while Edinburgh Rugby’s Jaco van der Walt becomes eligible via residency towards the end of November.

Jamie Ritchie and Hamish Watson are nailed on as first choice starters in the back-row, but who goes between them is still a bit more puzzling.

Nick Haining played in the Six Nations at the start of the year, Matt Fagerson played against Georgia before injury and Blade Thomson was given the nod against Wales. Others like Cornell du Preez and Magnus Bradbury are in the reckoning too.

After breaching protocols while with the Barbarians, Saracens winger Maitland missed the match with Wales. Townsend has said he will come back into his thoughts for the Autumn Nations Cup and with 48 caps he is very experienced, but Darcy Graham, Blair Kinghorn and Duhan van der Merwe have done well in his absence and it will be interesting to see what happens.