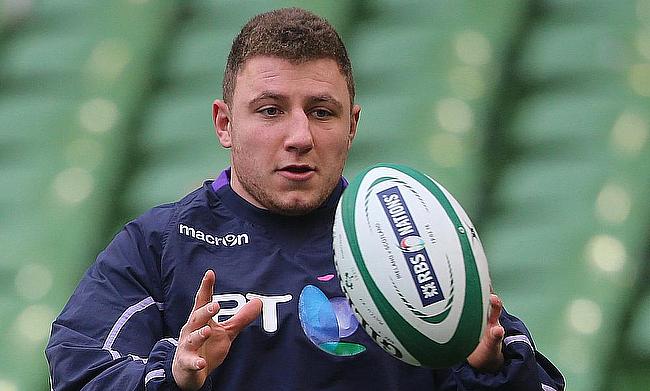 'A Scotland team with smiles on their faces is pretty dangerous'
Doddie Weir inducted into Scottish Rugby's hall of fame
Scott the lot: “He is already very good - and the great thing for Scotland is that he can get even better”
Nelson: Scotland ‘can’t take foot off the gas’ after France draw

We all know that when players are happy off the rugby pitch then they have a better chance of performing well on it.

And the great news for Scotland supporters ahead of their Autumn Nations Cup opener with Italy in Florence on Saturday is that Duncan Weir is in fine fettle.

Weir, the 29-year-old stand-off who came through the ranks with Cambuslang and Glasgow Hawks in his early days, looks set to start his first international since March 2016 at the weekend with Finn Russell and Adam Hastings injured.

The whole of Scotland will be willing the amiable Weir to do well on his 29th appearance for his country, but the biggest cheers watching the Amazon Prime coverage on TV will likely come from a house in the West Midlands.

From there his wife Nicola, one-year-old daughter Emily and son Harry, who was born last month, will certainly be supporting the former Glasgow Warriors and Edinburgh Rugby man.

“My wife is a great sounding board for me and my whole family have been amazing,” Worcester Warriors playmaker Weir told TRU.

“[Out with Covid-19 times] our house is like a hotel with family members coming down to support me in Worcester home games. They really make an effort to come down and be part of our lives and have strong relationships with our kids.

“Fatherhood has definitely helped me not bring rugby back into the house, although I still can’t go to sleep after a match until I’ve watched it back.

“After that I lock it away and it’s family time until I go back into work on a Monday. Maybe fatherhood has stopped me dwelling on things as I did in the past, which then affected my wife because I moped around.

“Over the last couple of years, I have just been going out there [with Worcester] and trying to enjoy myself, that’s a major thing. I have tried not to worry about people’s opinion or dwell on selection for Worcester or Scotland, I’ve just been going and expressing myself - that has been a massive thing.”

“I’m hugely passionate about playing for my country”

Being more relaxed seems to have worked for Weir because he has been in fine form for Worcester since his in 2018 and that has seen him edge his way back into the Scotland fold.

By March 2017 he had earned 27 caps, but he had to wait three years until appearance number 28 when he came off the bench for the last few minutes of the Six Nations triumph against France earlier in 2020.

With Russell and Hastings both now out for this whole November/December tournament and Jaco van der Walt not eligible/finished a quarantine period following a trip to South Africa until later in the month, this is a brilliant chance for Weir to wear number 10 against Italy and then France.

“I’m hugely passionate about playing for my country,” Weir stated.“[Before 2017] I probably didn’t cherish it the same way as I did those two minutes in the Six Nations against France this year, that was one of my proudest moments in a Scotland jersey.

“It’s been a rollercoaster ride the last three years, between my last cap and that one. It’s been a big journey, but I’d do it all again.

Gregor Townsend has provided an injury update ahead of the #AutumnNationsCup kicking off next weekend. pic.twitter.com/uYowMFS3ic

“Scotland head coach Gregor Townsend has always been honest and open with me. I’ve got a great relationship with Gregor. He’s developed my game over the years and I’ve never had a ‘toys out the pram’ moment.

“He’s developed the attacking side of my game over the last few years which has been great for me and also has helped me in just understanding the context of the game and making decisions.

"He was a 10 himself so he’s very good at explaining what he would do in certain situations. He helps with your understanding of the game and how you’re feeling in these pressure moments.

“When Finn was coming through and eventually pushing me out the [starting] spot at Glasgow a few years back, I was always needing things done by the book.

“If I made a mistake, I’d probably punish myself a bit too much and then I’d look at Finn and he’d be almost horizontal at times. It’s a great trait to have and I’ve definitely learned a lot from Finn over the years. Personally, I think he’s one of the best 10s in the world so why wouldn’t you tap into that mindset?”

When Weir runs out in Florence on Saturday, those who have not seen him in action will spot that his hair is slightly more prominent than usual.

Weir, who has so far raised over £5,700 for Acorns Children’s Hospice, explained: “I’ve always had a strong head of hair and friends have always pushed for me to grow it to see how it turns out.

“During [the first] lockdown it had grown a decent amount and I came up with an idea to grow it for charity until 2021. Covid-19 has brought a lot of challenges into many people’s lives so this is really a bit of fun to attempt to raise money for a great cause at my expense.

“It will be funny looking back at photos from during this time in years to come and explaining to the kids why daddy’s hair is slightly crazy.”

Italy v Scotland takes place in the Autumn Nations Cup on Saturday (12.45pm GMT) and is live on Amazon Prime