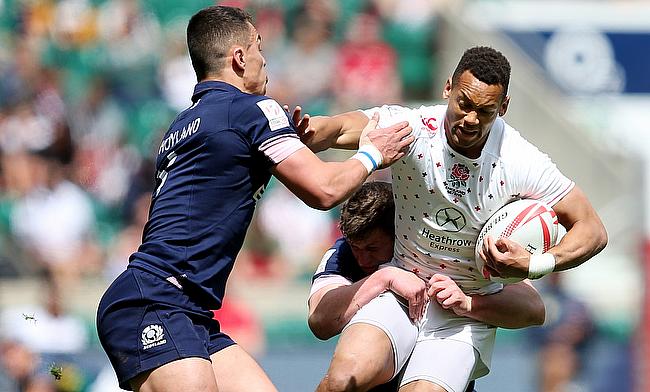 Scotland's Damien Hoyland, left, believes he can make his mark with the Dark Blues after his breakthrough year with Edinburgh
©PA

Scotland wing Damien Hoyland admitted that his exclusion from the 2015 World Cup has motivated him to become an even better player.

The 22-year-old was named in the training squad of Scotland prior to the World Cup but failed to make it to the final 31-man squad which travelled to England for the mega-event.

Hoyland, whose only appearance for his country came in August 2015 against Italy, has been in top form for his club, Edinburgh in the 2015/16 season of Pro12 after scoring eight tries in 20 matches which prompted Scotland's head coach Vern Cotter to include him for the upcoming tour of Japan.

After being involved in the Sevens rugby for quite a while now, Hoyland was also part of the Scotland side which won their maiden World Rugby Sevens Series title last month at Twickenham.

Admitting he did not expect to be part of the training squad before the World Cup, Hoyland believes with more experience under his belt in the last one-year, he is ready to face the challenges of Test rugby.

"When I was called up last year I was very, very surprised," admitted the former Boroughmuir and Melrose youngster. " But after training with the guys I did feel that I was ready for it.

"I had played sevens that year and worked on my physical strength and skills, so I felt quite comfortable when I went up against the other Scotland lads in training.

"But I'm in an even better place now after the year I've had with Edinburgh.

"It would've been great to have gone to the World Cup but for me it was a win-win situation at that point. Being involved in the pre-World Cup camp put me in a real good stead to return to Edinburgh.

"I felt way better and had learned a lot from the more experienced guys in the national team. That really helped kick-start my season with Edinburgh.

"Without that I may not have done so well this season. I could've gone to the World Cup but not played much, while missing out on the chance to play with Edinburgh. The way things worked out was probably the best thing that could have happened to me."

Despite, being among the top performers for Edinburgh this season, Hoyland said it was a dream come true after receiving the news on his inclusion in the national squad.

"I was hoping to be involved but when I got the email through I sat looking at my phone, struggling to take it in. Regardless of how much you want it, it still comes as a big surprise.

"This was the dream I had from when I started rugby and now it's happening. I suppose it's just about not getting too caught up in that and make sure I keep pushing myself further."

Hoyland's addition to the squad was in the place of Glasgow's veteran wing Sean Lamont, who also made it to the squad later on following the injury to Tim Visser.

However, Hoyland said he is excited to play alongside Lamont and is confident of performing well in Japan.

"Having watched Scotland play from a young age and seeing Sean play, it's mind-blowing to be in the same team as him now," he said.

"It does give me a bit more confidence knowing I'm in the squad ahead of more-experienced guys.

"When I got my call-up, my expectation was there would be quite a lot of younger guys in but it's actually almost full strength, so that was also good for my confidence. "

Recalling his debut game against Italy at Torino, Hoyland is hoping for more opportunities in the two Tests to showcase his talent and cementing a place in the national squad.

"I played about 15 minutes but didn't really see the ball," he explained. "I hit a few rucks and made a few tackles but that was it.

"I didn't get much of an opportunity to show what I can do.

"But this season with Edinburgh, I've really worked on being confident and getting on the ball. I guess if I can emulate that with Scotland then that is where I'll be at my most dangerous."

The first Test of the series is set to begin on 18th June at the Toyota Stadium followed by the second game on 25th June at the Ajinomoto Stadium.