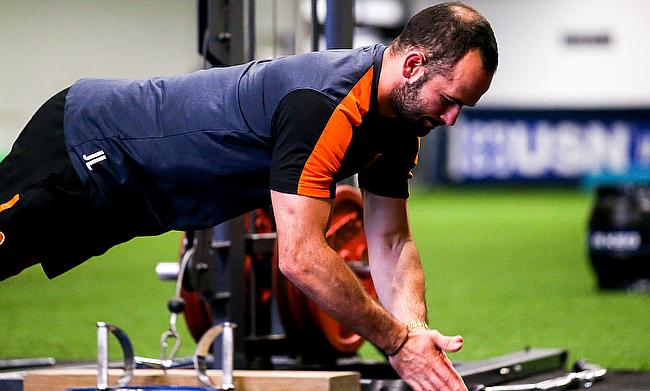 “I almost feel that I’m a new signing at the club with how last year went but, for how I feel at the moment, it is probably the best I have felt in years, which is really exciting,” Worcester Warriors fly-half Jono Lance started.

Just two months into last season, Lance was diagnosed with a stress fracture of the back, wiping out the majority of his first full season in the West Midlands. After making his way back to fitness, the Australian suffered muscular injuries that restricted any further involvement in the campaign.

“They all (the injuries) manifested from that back injury, hog-tying the whole year, Lance told TRU. “It was definitely very frustrating, but in saying that, it was a time for me to take a step back from rugby, revaluate and do a lot of things in my mind.

“I think I did that and have definitely come out of it with a lot of motivation to attack this year and forward into the next few years of my career. That’s why I think this pre-season, as much as it has been a longer one, I have really enjoyed it because I am looking forward to ripping into this year.”

Lance was straight back into the action on the opening weekend of Premiership Cup fixtures. Preferred to Duncan Weir against Leicester Tigers at Sixways, Lance led a Worcester team that resoundingly beat their opposition 57-23.

We can confirm that following a visit to a specialist Jono Lance has been diagnosed with a stress fracture of the back and he is likely to be out of action for around 16 weeks.
We wish @jonno_lance a speedy recovery. pic.twitter.com/P7h4GLjgPK

Not selected for the Warriors’ away loss to Bath the following week, Lance was reinstated for a second home fixture in a row, this time facing off against Exeter Chiefs. Playing the full 80 minutes in this game, Warriors went into the break with the lead, but fell foul to a dominant second half performance from their visitors, eventually losing 34-19.

“I think the successes of last year, the highest amount of wins in a season, there is definitely a lot of optimism,” Lance said. “When I got here last year everyone was optimistic and that led to the team having its most successful year as a club.”

“Everyone is optimistic at this time of the year, but I do think that through the competitiveness in the playing squad, we can do a lot of good things and just keep driving each other.”

To describe Worcester’s player pool as competitive would be understating things. Lance regularly is embroiled with Duncan Weir and Jamie Shillcock in the battle to wear the 10 shirt, but throughout the Worcester team, there are similar battles.

At inside centre alone, Welsh international Ashley Beck, former England U20 star Will Butler and the imperious Ryan Mills all could make claims for the starting 12 jersey. In the three fixtures so far this season, each have started a game, proving how competitive the position is and the difficult decisions that Alan Solomons has to make on a weekly basis.

“We’ve certainly got some depth in our centres,” Lance continued. “You can list about six guys that will happily start and then four guys that will probably be annoyed if they’re not in the team. That’s the same for a lot of positions and I think they need that going forward.

“But you need the guys to get along outside of the training park. I think this club has one of the best atmospheres as a playing group that I’ve ever been a part of. Me, Duncan (Weir) and Shilly (Jamie Shillcock), we all get along really well but you ask each of us and we’ll say; I want to be starting week one.

“I think it’s really good that all of us say that, but outside of that we all help each other. We talk after training, help each other with advice and learn a lot from one another. To be able to do goal kicking sessions with Duncan, who throughout last season, proved he is one of the best goal kickers in the world, is only going to be beneficial for me and all the goal kickers.

“That’s a little acute skill that you can show the benefits of it. It has got to be a squad-wide thing where everyone wants to be starting but learn from the other guys because we do have depth and we are only going to get better if we learn from each other.”