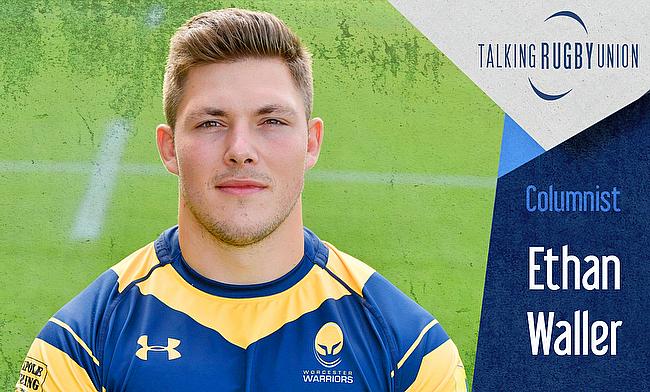 In his second column for TRU, Worcester’s Ethan Waller looks ahead to the Gallagher Premiership season which is drawing ever closer.

Thank you for delaying the season by four weeks so that any good weather is long gone. A bit of extra autumnal precipitation will ensure more knock-ons, and ipso facto, more scrums. Soggier tracks also lead to backs being a little less elusive, which really works wonders for those of us in chub club. Big fan of your work. Keep it up.

It's nearly October, so that means there are a few things you can be sure of:

For us at Worcester, this pre-season has been a gruelling shift, as I imagine it has been for every other club in the Premiership. I’ll take you through a little bit of timeline stuff.

The domestic season finished on the 18th May (20th if you count the end of season celebrations). Each player then has a mandatory five week break. This is normally split into two weeks of absolute rest, then three weeks of 'active rest'. Which essentially means that you start training…to get ready for training. Unfortunately, it’s an unavoidable part of the sport. If you tried going into the level of stress pre-season puts on your body completely dry, you are more or less guaranteed to pick up some sort of injury. I digress.

Just 4 modern day athletes in all their glory. #ChubClub https://t.co/oxNPkmRCc7

It was always going to be an arduous pre-season, so the powers that be extended the break to six weeks this year. Absolute godsend. Although, no matter how much time off you have, every year is the same. One minute you’re on the plane to your holiday destination of choice, you’re lifting that Piña Colada to your mouth (with your left hand of course), you’re about to take a sip and BAM! Suddenly you’re back out on the training pitch with tunnel vision, jelly legs and a serious internal debate over your chosen career path.

Thus, we enter the hell that is a World Cup year pre-season. Three blocks of four weeks. Conditioning, conditioning and rugby and of course just plain old rugby. A physically and mentally taxing period and I think I speak for most people when I say thank the lord the Prem is just round the corner. It’ll be nice to look at our schedule and not have to play the game of “which day is the heart attack coming this week?

However, as with all good things, there is a downside. The arrival of winter also signifies the pizza trailer going into its own off-season. As much as we love working the trailer, sadly not many people like to venture out of the house in subpar weather. Working weddings/private events also becomes problematic as our fixtures take over, meaning we can’t commit to weekends as our primary focus has to be on the rugby.

“But Beef, why don’t you just hire someone?”, I hear you ask.

We’re a relatively small business at the moment and all the profit we make goes straight back into improving and growing the business. Also, the work is sporadic that we couldn’t really offer someone a full-time position at the moment. Fortunately, we have some cracking stuff in the pipeline and we’ll be popping up during the week in and around Worcestershire, so here’s hoping we don’t get too rusty!

Overall, I love this time of year. It’s full of optimism and an infectiously exciting vibe that I'm sure is universal in rugger. From the professional game all the way down to grass roots, the start of a new season brings with it a clean slate. Whilst you can learn lessons from the previous years, ultimately it’s an opportunity to write whatever you want in your clubs respective history books.

Play some rugby? Inevitable. Break a scoring record? Yes please. Spend your Sundays and Mondays unable to walk? More than likely. Drink some beers? Win or lose, on the booze. Win some silverware? Why not?

At the risk of sounding like an Instagram influencer, you’ll get out of the season what you put into it. Players, if you aren’t M.O.M on the field, be damn sure you are off it. Supporters enjoy the spectacle. Accountants, you crunch those numbers. Fitness freaks, you crunch those abs. Here’s to a cracking season, hopefully see you on the other side.