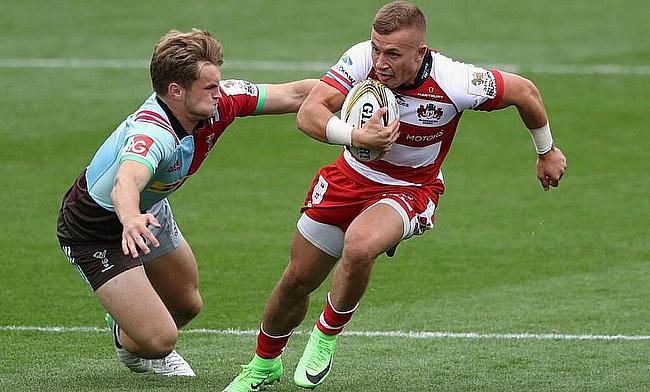 Match Report: Wasps 59-35 Bristol Bears
The Wasps’ ‘togetherness’ and ‘willingness to fight’
Why Wasps are ‘excited for the future’
Wasps aiming to tighten grip on top four spot against Sale Sharks

Lee Blackett says Wasps will not ‘waste energy’ thinking about their fellow Gallagher Premiership rivals as the regular season reaches an exciting climax this week.

The Midlands club are one of four teams vying for the final three play-off spots alongside Bath, Sale Sharks and Bristol Bears.

As things stand, Wasps sit in third position with two games remaining and their conclusion to the campaign begins tonight against Harlequins before Blackett’s charges host Exeter Chiefs in Round 22.

Last Tuesday, the aforementioned Bath took a huge stride towards a semi-final place as they produced a stunning comeback to clinch a 31-20 victory against West Country rivals Gloucester, but the Wasps boss isn’t concentrating on the fortunes of others ahead of a critical six days.

“We just focus on Quins,” Blackett said. "We don’t need to worry about everyone else around us, that’s what we’ve done so far.

Your Wasps side to travel to @Harlequins on Monday for the penultimate round of @GallagherUK @premrugby...#COYW ??????

“That [Bath v Gloucester] was a game that looked to be going one way after 60 minutes but every credit to everything they’ve done down at Bath. They’ve been really impressive since the restart. Stuart Hooper’s done a great job down there. Credit to them the way they came back, but look, that’s them and we’ve got to keep focusing on ourselves.

“I think too many people waste energy thinking about other teams. There's too much wasted energy about watching other games and worrying about other people’s results. Just keep our energy for our game, and that’s been the message for everyone.”

Since rugby’s resumption, Wasps have won six of their seven fixtures and in their last two matches against Leicester Tigers and Bristol Bears, the men from the Ricoh Arena have racked up 113 points.

The club’s resurgence under Blackett has been outstanding and now Wasps are on course to make a return to the play-offs, something which looked unlikely back in February.

“The really pleasing thing is there’s not really much chat about everything, it’s so key for this Quins game,” Blackett added. “It’s never been more vital with the way everyone’s winning at the moment so this Quins game, there’s no point going beyond that.

“It’s two monster games and let’s take each game, game-by game. Obviously, we’re really pleased that we’re in this position, but now we’ve got ourselves here, then we’re going to have to again, do what we’ve been doing beforehand which is focus on each game and take each game as it comes.”

Last season, Wasps missed out on a top four spot for the first time since 2015 as both Northampton Saints and Gloucester joined Exeter and eventual champions, Saracens, in the semi-finals.

Similarly to how Wasps have bounced back this term, Gloucester recovered from a disappointing 2017/18 campaign to reach the play-offs and included in the Cherry and Whites squad was Ben Vellacott.

The scrum-half swapped Kingsholm for the Ricoh Arena at the beginning of this season and having experienced the race for the top four last year, he admits, as a team, you have to relish the challenge.

"With both squads, it has been about taking things in our stride," Vellacott said. "The way things are, it is kind of knockout rugby now. One loss and you could be out of the top four so it is about who can manage those moments better and those pressurised situations the best.

“As a squad, we are really excited. We are staying close-knit as a group and we are taking each game as it comes. Monday night is just another stepping stone for us in terms of where we want to be as a squad.

“Obviously, we have had a couple of weeks off since our last game so it has given us a little bit more time to prepare, but obviously watching Harlequins in the Premiership Rugby Cup final (last Monday), we know what they can bring and we know the importance of this game."

Vellacott is amongst the replacements for Wasps' visit to the capital tonight, with Blackett selecting a fully-loaded squad given his side haven't been in action for 15 days.

There is one change to the starting line-up that beat Bristol Bears last time out as Joe Launchbury is missing with a calf injury and is replaced by James Gaskell.

As for Quins, Chris Robshaw will lead his team out for the final time at the Twickenham Stoop before he begins the next chapter of his career with San Diego Legion and Head of Rugby Paul Gustard has made five changes to the side that lost 27-19 against Sale in the Premiership Rugby Cup final last week.

With the hosts wanting to send their captain out on high, they will be desperate to secure a third league win on the spin, but Blackett feels Wasps are as equally as driven to gain a positive result with their play-off hopes top of the agenda.

“There is going to be loads of motivation for them, but you can’t lose too much sight on the motivation for us,” Blackett added. “Our motivation is pretty clear. We have to win this game and we can’t rely on anything else to go our way. We are not talking about the picture at the end. We will just focus on our result.”