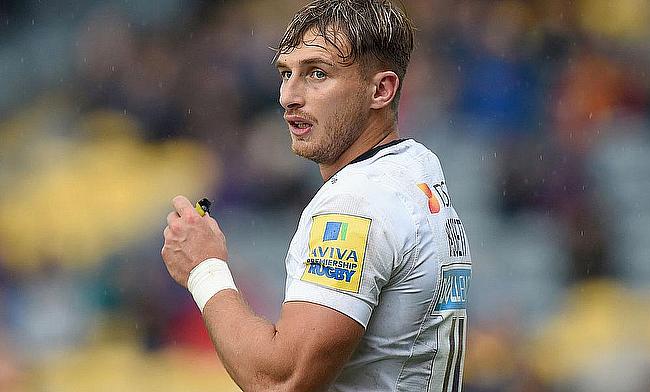 Wasps name strong line-up for clash against Sale Sharks
Wasps move to third with 32-17 bonus point win over Worcester
Wasps ‘not phased by others’ as they look to maintain momentum
Lee Blackett: Wasps will 'predominantly spend time focusing on ourselves'

Wasps take on Sale Sharks at the Ricoh Arena to kick off the Gallagher Premiership’s midweek block of fixtures and the hosts on Tuesday evening boast an eye-catching run of form.

Lee Blackett’s side have hit the ground running since the top-flight resumed and after an excellent display to see off rivals Northampton Saints, the Midlands outfit came from behind to grind out an impressive 32-17 victory against Worcester Warriors on Friday night.

Including their wins over Saracens, London Irish and Gloucester pre-lockdown, Wasps have now strung together five successive bonus-point triumphs.

With seven games to go in the regular season, the Coventry-based club currently occupy third place in the league standings, but defence coach Ian Costello believes his side can’t look too far ahead as they target a top four spot.

“It is really difficult because we are trying to look at blocks of games, but realistically, you can’t look beyond the next game,” Costello said. “Our focus is on Sale and you put Bath [who Wasps face on Bank Holiday Monday] to one side.

“You have to embrace each challenge as it comes. We have an idea of what we think we might need in terms of points from certain blocks and I think every team has done that, but it has to be a game-to-game focus.”

Despite putting themselves in a strong position to secure a play-off spot this term, Costello and his Wasps team were languishing in 10th place after the first 10 games.

Their sluggish start saw Dai Young part ways with the club after nine years as Director of Rugby, leading to Blackett taking over the reins at the Ricoh.

Since the former Rotherham Titans man stepped into the hot-seat, Wasps’ campaign has completely transformed and over that period, Blackett’s charges have been praised for both their defensive fight as well as their exciting brand of rugby.

However, winger Josh Bassett insists there hasn’t been any radical changes since Young’s departure, but the 28-year-old admitted aspects of their game have started to come to fruition.

“I don’t think we are doing anything too dissimilar from when Dai was here,” Bassett said. “He obviously had new ideas, but sometimes it is just little things going in your favour.

“I feel like these things have started to happen. You saw in that game, the first game [which Blackett was in charge] against Leicester Tigers, little things just didn’t go our way and then against Saracens, everything clicked. We have hit the ground running and as cliché as it is, we are just focused on the next game.

“We are focused on enjoying ourselves and building and seeing what the next game and next challenge brings. That’s what we are excited about as a squad. To get 10 points out of the first two games is absolutely fantastic against two tough teams and the whole squad has been used. This is what we are going to need to push us forward.”

As Bassett alludes to, the majority of Wasps’ squad has featured since they returned to action, with Blackett utilising 37 of his players thus far.

Ahead of their clash with Sale, the Wasps hierarchy have reverted back to the starting XV that defeated Northampton on August 16th, with the exception of the injured Kieran Brookes who is replaced by Jeff Toomaga-Allen.

It means the Midlands club have completely changed their line-up from the one that begun their victory over Worcester and Costello has been extremely pleased by the depth in the Wasps ranks.

“In the past, we have been guilty of not being able to grind out wins so it was a gritty performance against Worcester,” added Costello.

“We started really well and that might have gone missing a little bit. Then the momentum in the game swung quickly with a couple of back-to back-penalties which seems to be the trend at the moment so we had to dig in just before half-time so we were very pleased with the manner [of the win], especially in the second half and with our changes.

“We showed a bit of steel when momentum had gone against us and finished strongly. We have used 37 players in the games and hopefully we will now get the reward with the selection of our squad against Sale.”

There is no doubt there is a sense of positivity and confidence in the Wasps camp as they prepare to welcome fellow top four candidates Sale to the Ricoh.

Wasps’ form has seen them overtake the Sharks in the table whilst back-to-back defeats for Steve Diamond’s side against Harlequins and league leaders Exeter Chiefs, respectively, have put a dent in their aspirations.

Whilst Sale conclude this week by hosting Bristol Bears (2nd), Wasps end the month with a trip to Bath, who themselves, are hot on the heels of the top four. With a potentially season-defining few days ahead, both Bassett and Costello are relishing the challenge.

An amazing play from Thomas Young turns defence to attack; Sopoaga, Robson and Bassett do the cutting ??#RugbyRestart pic.twitter.com/1DTyFRCkK4

“I think across the Premiership, you can see a lot of teams are thinking about that [the top four],” Bassett said.

“It is tight up there. There are opportunities so you can’t look too far ahead because if you start looking at those opportunities, you are going to miss crucial points and crucial games and not be where you want to be by the end of it.”

“We’ve got ourselves in a really good position so our focus now is ‘can we do a job against Sale to put us in a better position?’” added Costello.

“That would give us a bit of leeway down the line that if we do slip up and rest and rotate players, we can do that with confidence and that is why the Sale game is important to get us in the position to do that.”