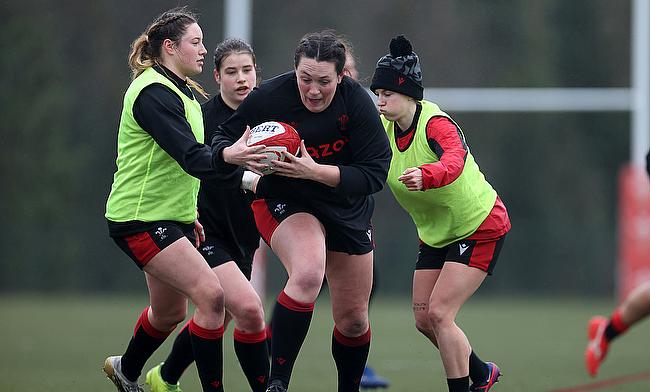 Simon Middleton Exclusive: Standout moments, England’s strength in depth and growing the game
Georgia Evans Interview: 'I want young girls to see there is a chance for them to play for Wales'
Hannah Jones: Stand-in skipper looking to help ‘elusive’ Welsh backline click
Donna Rose Exclusive: “I want to share my experience of living with Borderline Personality Disorder to help others”

Cerys Hale turns 29 on April 4th and the Wales tighthead prop would love an early birthday present to come in the shape of beating Ireland in the TikTok Women’s Six Nations clash at the RDS in Dublin on Saturday.

It would certainly better the late birthday ‘gift’ she got on April 10th last year when the Irish handed out a 45-0 thumping to Wales in the shortened Six Nations at the Cardiff Arms Park.

That was a bit of a line in the sand moment for women’s rugby in Wales. It had come seven days after a 53-0 loss in France and then a 27-20 defeat to Scotland in Glasgow which condemned the Welsh to a sixth-place finish.

Since then, so much has changed in the Wales set-up and with 12 players now full-time, 12 on retainer contracts and a World Cup to look forward to later in the year under a new coaching regime, these are exciting times.

Tighthead prop Hale, who has 35 caps under her belt, is one of the dozen on a retainer deal and this week she opened up on the turnaround in her rugby in the last year since before those poor results versus France, Ireland and Scotland.

“Twelve months ago I was perhaps thinking about retiring from rugby because I wasn’t enjoying it as much if I am being honest, but the turnaround in a year has been unbelievable,” she told TRU after being named to start in the round one clash for 2022.

“I am loving this environment now, I feel like I am learning every day and thriving, so I cannot wait to see what this Six Nations has in store for us.

“We also have a World Cup to look forward to, but with so much having changed in the set-up and so many players pushing for places, we cannot be thinking about October and November yet - Ireland is the only thing on my mind.

“I think what made me move away from the idea of retiring was the girls if I’m honest. It is too hard at times to turn your back on your friends and I thought I’d miss them all, so I am so glad I got a new lease of life and decided to put in the hard work during this exciting time for women’s rugby in this country.

“Right now I am 100 per cent enjoying rugby more than I ever have.”

Hale, who plays for Gloucester-Hartpury in the Allianz Premier 15s and was part of the Dragons Women’s under-18 coaching team for the regional programme recently, believes the balance she now has in her life is helping her on and off the field.

She works from home part-time in Newport for the John Muir Trust as an award officer, essentially training staff to deliver the award in schools, and on other days she trains with the Wales squad.

The John Muir Award encourages people of all backgrounds to connect with, enjoy and care for wild places. It is an environmental award scheme focused on increasing awareness and responsibility for the natural environment through a structured scheme, in a spirit of fun, adventure and exploration.

“I am working part-time alongside my rugby and in terms of the retainer contract, it has been great just to get more contact time with the coaches, with the girls and everyone in the set-up while still doing things out with rugby,” Hale explains.

“It is nice to have a couple of strings to your bow and it is good to switch off from rugby sometimes. I feel I am getting the best of both worlds and I am in a good place.

“It is an exciting time and rugby-wise, I have been working on my skills a lot while the full-time girls inspire me and I think I am becoming a better rugby player.

“In terms of this weekend, well I am relishing the chance to take on the Irish forwards. As a front-rower, I like to be known as someone who helps provide a good platform to my team from the set-piece and that job starts this weekend for this tournament.

“Ireland have a good pack, but we have been working hard on things and we want to put them under pressure in the scrums and in the lineout.

“Our driving lineout worked well in the Autumn and we want to keep that in our game and build on it. We also know that other teams will know what to expect, so we have to keep upping our game and getting better and better.”

“We feel we have a good balance in the side”

For the game in Dublin, Kayleigh Powell returns to the Wales team for her first Test since the 2021 Six Nations, starting at full-back while young talent Sisilia Tuipulotu is set to debut from the bench.

Head coach Ioan Cunningham said:  “We feel we have a good balance in the side with plenty of experience alongside some exciting young players too.

“It’s good to have players like Kayleigh, Kelsey and others back while Sisilia has settled in well to the training environment after taking up a retainer contract and she fully deserves to make the next step to international rugby.

“The more exposure we can give her at this level, the more comfortable she will be and she can go on and do good things.

“The game against USA two weeks ago gave everyone a chance to stake their claim so we are certainly rewarding performance but also very conscious that we have three Test matches in three weekends.

“There is now healthy competition throughout the squad which is ideal.”

Ireland versus Wales kicks off at 4.45pm on Saturday at the RDS in Dublin and is live on BBC Two Northern Ireland.