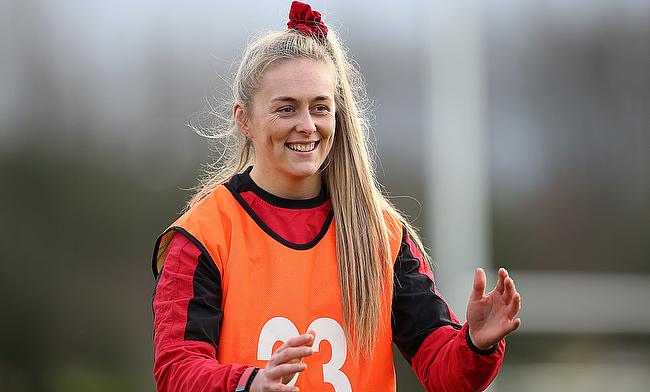 Harriet Millar-Mills Exclusive: Somebody has got to break the cycle and support the game
Why England’s Red Roses are under ‘no illusions’ heading into the Six Nations final
Maud Muir Exclusive: The teenage prop making an impression for Wasps and England
Donna Rose Exclusive: “I want to share my experience of living with Borderline Personality Disorder to help others”

It is fair to say the Women’s Six Nations campaign has not gone the way new Wales head coach Warren Abrahams would have wanted.

To date, they have lost both their Pool B games to France and Ireland by large margins and have not been able to fire a shot in attack in 160 minutes.

To add to that, Abrahams has had to deal with a long injury list which now has talismanic skipper Siwan Lillicrap on it after the No.8 injured her ankle.

You could say it never rains, it pours, but Abrahams has said since day one that this is a project that will take time with the long-term goal of competing with the best sides at the World Cup next year.

With Lillicrap missing, 24-year-old Gloucester-Hartpury centre Hannah Jones, who is also in the GB Sevens mix for the Olympics, skippers the side in Scotland on Saturday as Wales look to avoid the Wooden Spoon.

For the match, Abrahams has named another GB Sevens hopeful, Jasmine Joyce, at full-back and moved Robyn Wilkins to 10.

With winger Caitlin Lewis and centre Gemma Rowland also coming in, Abrahams has called the new-look backline “elusive” and hopes they will cause Scotland issues.

“If you look at the backline that has been named on paper, it is a good backline to be involved in,” skipper Jones told TRU.

?? "It's our last chance to wear that jersey, we need to put everything into this performance" Rallying call from #WalesWomen skipper against Scotland @HannahJones_12 ?? https://t.co/M3JtIjj9lS

“I look at the players who are listed inside and outside of me at 12 and there is lots of exciting talent there, so it is up to us all to make the most of any ball we get and try and cause Scotland some problems.

“If things do open up for us, we want to show what attacking qualities we do have and be clinical. We have very much been training with the mentality of ‘play what you see’ and we want to play some exciting rugby in this match if we get the chance.

“It has been a rollercoaster of emotions over the last few weeks and the two matches to date have not gone as we would have liked, but we have reflected and done our analysis as individuals and as a group.

“We have to park what has gone before now and focus on the next job and show people what we can do. We are really focused.

“I am excited to be captain. Obviously, I am gutted that Siwan is out because she leads by example, but for me, this is a massive honour and I am massively grateful for the opportunity.

“When I am out there on the pitch, I won’t do anything different than normal. Hopefully, I can lead by my performance and help the other girls raise our level of performance.

“And as a team, although we want the win, we know that it will not come without a performance, so it is the performance that we are really wanting to nail down this weekend.

“We have to go into this one with a winning mindset.”

Evans: “Our big focus as forwards is our set piece”

With Lillicrap missing, Georgia Evans of Saracens has two big jobs this weekend because she moves from six to No.8 and is also taking on the role of vice-captain.

“We want to come out firing in the opening stages of this one for sure,” Evans, 24, said.

“We have had close calls against Scotland in recent years, but we don’t want it to be a cagey affair so we have to try and stamp our mark on things in the opening 20 minutes or so and build from there.

“Our big focus as forwards is our set piece and we want to give a good platform to our backs so that they can hopefully go on and score some tries.

“We have looked at Scotland in detail and we want to really go hard in the set-piece and get at them in the scrum and in the lineouts.

“With the way the two previous games had gone, it was good to have a weekend off last time around to reflect and really rest our bodies and mentally switch off as well.

“We used the time wisely. We came in last Saturday to train and we re-focused so that everything was looking at this game.”

Abrahams: “This is an opportunity for players to put their hands up”

With nine personnel and three positional changes from the Irish game a fortnight ago, Abrahams wants the players coming into the starting XV to embrace this chance rather than be scared of it as Wales look to secure fifth place.

He said: “We’re excited about the opportunity to go out one more time in a Six Nations match and represent the jersey.

“We have some injuries, but this is an opportunity for players to put their hands up. It's good to see some leaders getting additional responsibility with Hannah Jones as captain and another of our leaders Georgia stepping up as vice-captain.

Looking forward to this one and proud of @HannahJones_12 for captaining the team?? https://t.co/kXNPV7cFYO

“I’m excited by the backline with some of the younger players such as Meg Davies and Caitlin Lewis hungry for opportunities and Jaz [Joyce] will no doubt add some spice at full-back.

“We know we didn’t start well in our first two matches. We have to make sure we get straight out from the blocks on Saturday and build our innings from there.

“I always believe in the team and I know if they can get themselves in the best possible mindset, get on the front foot and make some bold decisions, they can show what they’re made of.”