Georgia Evans Interview: "I want young girls to see there is a chance for them to play for Wales” 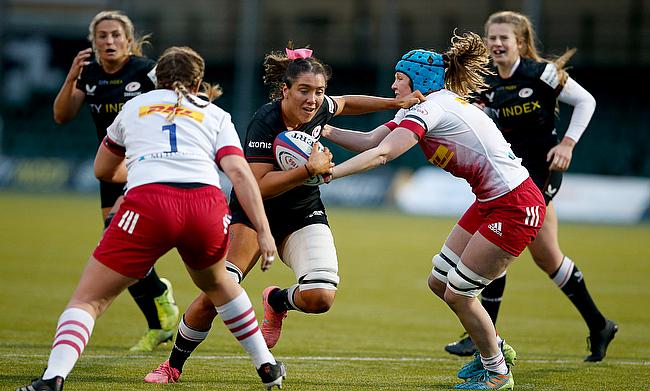 Women's rugby has shone over the last 12 months so what can the game achieve in 2022?
Danielle Waterman Interview: It is important that players are appropriately supported
A women’s Lions tour is ‘just another opportunity to grow the game’
Poppy Cleall Exclusive: “The people I'm playing with are who I play for”

This landmark moment for the women’s game in Wales was described as the “start of an exciting journey” by Group Chief Executive Steve Phillips and it is a sentiment echoed by current Saracens star Georgia Evans.

The 26-year-old has represented her country on 11 occasions and whilst she wasn’t included in the first batch of full-time contracts to be handed out by the WRU, she was awarded one of nine retainer contracts on Wednesday.

For Evans, the bigger picture for rugby in Wales is now right at the forefront of her mind.

“It’s massively exciting,” Evans tells TRU. “England went professional a few years ago and look where they are now. I think it's massive for all of us, especially going into such a big year with the Rugby World Cup only a few months away.

“We've wanted it to happen for so long. We came off the back of quite a bad year last year and we didn't want to be in that situation again this year.

“We wanted to be up there fighting with the best so the only way forward for that was to look into professionalism and to try and get women's rugby (and women's sport in general) in that category. We can play and recover better then. It's huge. We're paving the way now for all those players looking to be in our position in the future.”

The full-time deals have been awarded to some of the leading players in the Allianz Premier 15s and it will allow them to focus solely on rugby at Wales’ National Centre of Excellence.

The likes of Bristol Bears’ speedster Jasmin Joyce and skipper Siwan Lillicrap are amongst the inclusions as well as Evans’ club teammate Donna Rose.

For Evans herself, her retainer contract means she will train alongside the 12 full-time players between one and three days a week and up to six more players on retainer contracts are set to be added in the coming weeks.

Asked whether the contract announcements will raise the level of competition amongst the group, Evans said: “Absolutely! You always want the standard to increase no matter where you play. By having that level of competition, whether they're full time, part-time players in camp, it's only going to raise the standards which is what you need as a player.

“It's the best thing for us, inside and outside of camp as we play each other week in, week out in the Premiership. That's pretty fun because you can always go back and tell a story or two. I can't wait to go back into camp and see what it's like.

“The more time we can spend together, the better we can be as a group so hopefully we can put our marker down on the tournament [in the Six Nations which begins at the end of March] and show people that this is the way forward for us.”

“I looked over at my cap and didn’t feel like I deserved to have it and I could not even get out of my bed.

On Rose’s selection, she added: "It was great in particular to see Donna pick up one of those contracts. I'm so proud of her. She made her debut for Wales last year and it was incredible seeing her pick up her first cap. I can't wait to see what she does with it because she's so talented and her form has really grown in recent months.”

Emulating her colleague is something Evans may well be striving for despite having only taken up the sport at the age of 17.

But since arriving at Saracens two seasons ago, she has firmly found her feet in the top flight and the versatile forward is determined to keep taking steps in the right direction for both her club and country.

“Shamefully, I didn't really watch a lot of women's rugby growing up, it was more the men's game I took an interest in,” Evans continued. “I followed my brother [Kyle] and cousin's [former Wales fly-half Ceri Sweeney] career. I come from a rugby-mad family.

“When I started playing, I didn't think too much about it. 2017 came around with the World Cup in Ireland and I saw the England girls playing very well. Watching them made me think it could be a possibility for it to be my career.

"Obviously being in Wales, I knew I didn't want to play for anyone else. I wanted to see how far I could go and challenge myself even though it wasn't on the cards to be my career at the time. I still wanted to be the best player I could be and now I think it's amazing that girls growing up can see Wales and England have done it. The fact it's actually a career aspiration they can achieve is brilliant.”

With Wales’ next fixtures set to be the Six Nations in two months time, Evans’ immediate focus will be on Saracens who currently lead the way in the Premier 15s.

To conclude the month, the table-toppers face Sale Sharks and Worcester Warriors before they begin February with a mouth-watering clash against Harlequins.

‘The Big Game’ takes place at The Stoop on February 5th and Gerard Mullen’s side not only beat Saracens in last year’s final but also earlier in the campaign at the StoneX.

With that in mind, Evans is hoping to seal her first win against Quins when they go head-to-head in three weeks time: "When it comes to Quins, there's always a bit of rivalry. It would be huge to get a win over them. They challenge us to be better and last time, we weren't good enough.

“We had to look at ourselves in the mirror and realise we didn't perform and turn up that day. So many players are challenging each other and pushing one another to get better. I think that's really helping us training-wise. We're at a level where we haven't been for a long time.

“I think that really showed when we played against Loughborough [27-17 win] at the weekend. I think we are building towards that perfect performance that we need and want to play against Quins.”