Wales’ Alisha Butchers: “We believe there is more to come from us" 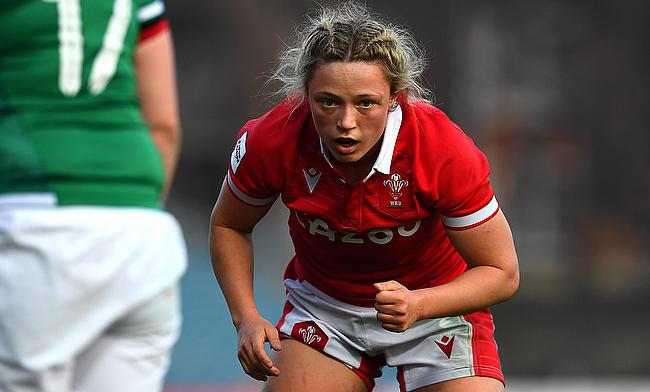 Quite simply, there was only one name on the lips of all rugby fans after the opening round of the TikTok Women’s Six Nations and that was Alisha Butchers.

The 24-year-old Bristol Bears’ back-row was everywhere for Wales as they came from behind at the break to defeat Ireland 27-19 at the RDS in Dublin to begin their campaign with a bonus-point victory.

Fast forward a few days and, having moved up to 10th in the world rankings, they are getting ready to welcome Scotland to Cardiff Arms Park in round two this Saturday.

Scotland second-row Emma Wassell said earlier in the week that there will be an “extra edge” to this game between two sides who have been evenly matched in the past, but more significantly, they are also due to meet again in their opening World Cup fixture in October in New Zealand.

Both teams will want to put down a marker to show where they are at in their development and it promises to be a cracker.

“What a start we had last week, we couldn’t have asked for things to go any better if I am honest,” Butchers, who is now one of 12 full-time contracted players in the Welsh set-up, told TRU.

“We were 14-5 down at half-time, but we never once doubted that we could come away with the win and that is a real shift in mentality for us.

“At half-time, everyone was calm and we knew what we had to do in the second half to get over the line. We tightened things up and we came out flying and took things to Ireland and got on the front foot.

“Everyone came back into camp earlier in the week bouncing and smiling, but we soon switched on to focusing on Scotland.

“Now we believe there is more to come from us, 100 per cent. We hadn’t played together since the Autumn when we took to the field last weekend and while there were lots of good things about the performance in Ireland, there are also things we can do better going forward.

“We have set the standards for where our performances need to be on a regular basis and the only way is up now.

“As a group, we want to be the ones that can change what the future of Welsh rugby for women looks like and I believe that we can do that.

“We have heard that there is going to be a big crowd on Saturday at the Arms Park and we just cannot wait for it.”

“It has been quite a journey over these last 12 months”

Rugby careers - like life - can change in the blink of an eye and are full of highs and lows.

No one knows that more than Butchers, who will again wear the number six jersey on Saturday, because this time last year she had just had surgery on an ankle injury and had set up a GoFundMe page because Bristol's insurance did not cover all of the treatment.

She then had to watch from the sidelines as Wales finished bottom of the pile in the shortened Six Nations of 2021 and was pretty down in the dumps.

Since then, she has regained full fitness, earned her full-time Welsh contract and got engaged to partner and teammate Jasmine Joyce.

“On my day off on Monday to recover after the Ireland game, I was walking on the beach with Jaz, my sister and Nala [the dog] and I took some time just to step back from things and reflect on what has happened of late,” Butchers explains.

“To receive the player of the match award for me after the Ireland game was incredible because it has been quite a journey over these last 12 months or so.

“When I think where I was 12 months ago with the injury and such like, to have that medal around my neck and be celebrating with Jaz and the rest of the girls just felt surreal, but amazing at the same time.

“And in general, I just feel in a really good place both on and off the pitch. When you are happy off the pitch you tend to be happy on it and play better rugby so long may that continue. I just want to keep enjoying my rugby and help this Wales team grow.”

“We are in no way underestimating Scotland”

While Wales have been able to name an unchanged matchday 23 for this one, Scotland have had to shuffle things around due to Covid, other illnesses and injury following their 57-5 reverse to England in Edinburgh.

However, Wales head coach Ioan Cunningham knows it will still be a very tough match in front of what is set to be a big crowd and he said:  “We are in no way underestimating Scotland.

“They are a tough team and have grown cohesion having spent a lot of time together during their campaign to qualify for the World Cup. Their scoreline against England didn’t reflect their performance and they will come down looking to bounce back.

“We are expecting a tough challenge, but it is one we are looking forward to. There is always room for improvement. We were pleased with our improved discipline against Ireland, but we want to keep getting better in that area. We also want to finish strongly again and that needs a real intensity, both physically and mentally, to be shown again.

“We’d love to have a really big crowd to get behind the team, that would be awesome. It would give the players a real boost and we want to produce a performance that inspires the next generation.”

Wales versus Scotland kicks-off at 4.45pm on Saturday at Cardiff Arms Park and is live on BBC Two.