USA vs Canada - The Verdict 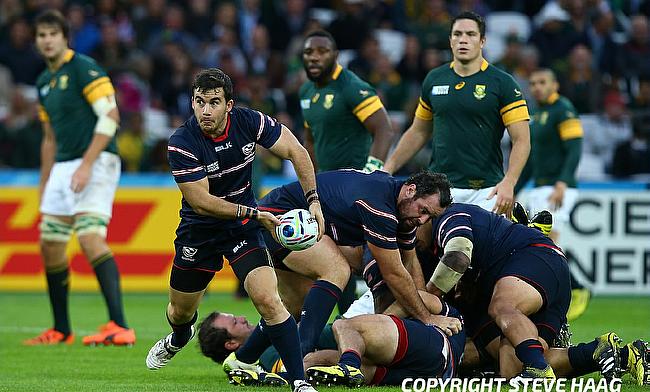 After a tough Pool in 2015, the USA will once again be up for the challenge in Japan
©Steve Haag Sports

We're seeing a better rugby player being produced - McWilliams
USA 7s are leading the way, but Olympics still number one target
Jones: ‘London 7s can help us build towards Olympic qualifiers’
John Moonlight: 'Guys are going to realise that it takes a lot to be a professional.'

In the early hours of Sunday morning, Talking Rugby Union’s Joe Harvey watched the USA take on Canada in Glendale. Here’s what Joe made of performance from both teams and how MLR will help both the teams be more competitive in Japan this autumn.

To put it simply, Canada were humbled at Infinity Park in Colorado. Losing 47-19 to a rampant USA, it was easy for the Americans to drift past the Canada defensive line.

Of course, there was an element of luck too at times. Blain Scully’s try wouldn’t have been if it weren’t for the ball bouncing back off the corner flag after Will Hooley’s cross-field kick.

Canada did have some positive moments though. Tyler Ardron, currently of the Chiefs in Super Rugby and previously of the Ospreys, rolled back the years to his sevens days, intercepting the ball deep in his own half and then scoring unopposed at the opposite end of the field. Not bad for someone who played the majority of his rugby at lock last season.

FULL TIME: A battle to start the #PNC2019 with @USARugby taking the win. Captain @tyardron getting Canada's first try off an intercepted pass, a penalty try off the scrum, & @conort22 notching 1 more at full time. Next up, @fijirugby on August 2nd ???? #RugbyCA #RC15s pic.twitter.com/BGkOBsz2ED

Whilst the score line makes this game look like a whitewash, neither side was perfect and with both nations in tough pools come the World Cup in September, their coaches will be trying to get the players ready for some stern challenges.

Captained by former Cardiff man Blaine Scully, there was one player that stood out in particular for Gary Gold’s side. Bedford fly-half and former TRU interviewee, Will Hooley, was deployed at full-back in this game, playing for the full 80 minutes and he even had a stint at fly-half towards the conclusion of the match.

It was Hooley’s cross-field kick that led to Scully’s try, but that wasn’t his only key influence in the game. The former Exeter and Northampton man put Utah Warriors’ Gannon Moore over with some 10 minutes still to play as he drew in opposition defenders extremely well by keeping his shoulders flat which created space for his teammate to touchdown.

Another place that the USA can be happy with is their forwards. In the past couple of seasons, Canada have had dominance up front, but in this game that seemed to have changed. Each of the front-row selected represent Major League Rugby teams. Worcester Warriors Joe Taufete’e was rested in favour of Dylan Fawsitt who scored 16 tries for Rugby United New York this season. Elsewhere, the locks, Ben Landry and Nick Civetta, have played in the Championship this season, although Civetta is not likely to reach the World Cup after seemingly breaking his ankle in this game.

Solid first performance of the summer for @USARugby. Thanks so much to all of the fans young and old for the outstanding support. Honored as always to represent the United States. On to Fiji... #EaglesUnited pic.twitter.com/6qcMOsJByn

However, it is the USA’s back-row that could potentially be one of the most underrated things about their team. Earlier this year, many swooned over an England backrow that featured Mark Wilson, Tom Curry and Billy Vunipola. The USA are no different. With former sevens player Malon Al-Jiboori, New York’s John Quill and New Orleans’ Cam Dolan, each of these players are athletic and have no problem getting around the field.

Dolan is six foot seven inches tall, plays at eight and is just as physical as any Tier One in that position. Added to this, his height and power makes it look as if the USA have three locks on the field, which is a nightmare for the opposition’s front-row.

Finally, it was impressive to see USA Sevens players Madison Hughes and Martin Iosefo in action for the 15s side. Iosefo played for the full game, not performing too badly apart from a couple of handling errors that didn’t cost the USA at all. Hughes came on for Sale’s AJ MacGinty and slotted in at full-back. It was a performance that won’t do the English-born back any disservice, however it is probably Hughes’ reliability that has got him into the squad.

With Canada having been largely under the cosh in this game, there are very few positives that Kingsley Jones will be able to take from this performance. What is immediately noticeable is the amount of players that are currently without clubs.

Whilst the majority have left professional environments, it is a concern that the most likely reason these players were not given new contracts is due to a lack of playing time. When contrasted to the USA team, every player has played some form of professional rugby in the last year and will be extremely sharp going into these warm-up games and furthermore, into the World Cup.

Scrummaging quite well against the Eagles, Canada even got a penalty try when the USA were reduced to 14 men late in the game. However, it was the forwards that were also Canada’s biggest downfall.

Added to this, the Canadian lineout has come under some criticism and it is easy to understand why. According to J. Wallusch, a sports data scientist, Canada only had a 42% lineout success rate, meaning that they consistently coughed up the ball to their opposition at the set-piece.

Time of controlled ball possession @USARugby vs. @RugbyCanada #PacificNationsCup.
30% of plays not longer than 5sec. Lots of kicking, lots of handling errors. Alarmingly low (42%) line-out success rate for ??.
The ?? much stronger than vs @RugbyUruguay#RugbyUnited#RugbyStats pic.twitter.com/nWDqFfqXtQ

Without being able to retain possession, it is even easier to understand why the USA were able to score nearly 50 points against the Canadians. No doubt some of this inconsistency has been caused by the forced retirement of stalwart Ray Barkwill who ran the lineout for five years.

Not able to keep the ball, Canada’s backs were largely starved of touches. Glasgow Warriors’ DTH van der Merwe had very little say on the game as he was defended really well by Blaine Scully in particular, which meant Conor Trainor became Canada’s main outlet of attack.

Although he was previously mentioned, Tyler Ardron’s return to the Canada side is more than welcome to see. Maligned by injury during the 2015 Rugby World Cup, Ardron has had his talents recognised in Super Rugby and his fitness is a just reward for the number eight who will be going to his second World Cup.

Another player in Canada’s backrow is Darlington Mowden Park’s Matt Heaton. Having mixed his time last season in National One with his national team, Heaton will potentially be the only NCA player at the World Cup. A monumental achievement for both the player and his club.

Where Canada need to find some consistency is at flyhalf. Former media officer for Rugby Canada, Bryan Kelly, reported last week that DTH van der Merwe had played with 12 different fly-halves since making his debut in 2006. The best option for Canada is most likely Nottingham’s Shane O’Leary who has been a dependable option for both club and country in recent years and is reliable off the tee.

The only issue with getting some consistency at 10 is that Canada only have four more games before their first pool game against Italy in September. Other than that one position, the team is fairly settled. With some exciting attacking options and a raft of good forwards, Canada have the ability to perform admirably in Japan.

A rise in professionalism

Due to the introduction of Major League Rugby, both the USA and Canada have seen a dramatic increase in the amount of professional rugby players in their ranks. In 2015, only 12 of the USA’s 31-man squad were in professional environments.

Contrast that to now where all the USA players are in professional environments, this really is a dramatic change for the national team and can only be beneficial for the side in the World Cup. In a pool with England, France, Tonga and Argentina, it is not unrealistic to think that the USA could beat two of these teams.

PNC Preview | In all, 26 players from nine teams will represent #MLRugby on Saturday. @RugbyCanada will bring 15 while @USARugby will field 11 in what will be the 62nd meeting between the two sides.

For Canada, there is still an uphill battle that they have to face.  Nine of the 23-man team who featured against the USA game played in Major League Rugby, with the rest either playing their domestic rugby in Canada or abroad professionally.

For them, there is too much disparity in the level of rugby that the team plays. By the next World Cup, it is highly unlikely that any of the players will be amateur in the Canada side, but for a team that hasn’t had a good run in the World Cup since 1991, another four years is a long time to wait for fans.