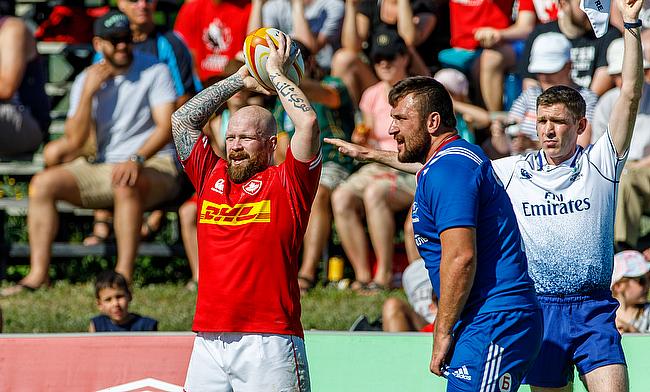 “Obviously, we didn’t plan to be in this situation, but here we are,” stated Ray Barkwill.

“So, it’s time to really roll our sleeves up and get qualified, to make sure that rugby keeps running strong back home and keep that streak of being at the World Cup.”

Having already played Kenya, Canada still have to face Germany and Hong Kong this month and the winners of the competition will join Pool B alongside New Zealand, South Africa, Italy and Namibia for the 2019 Rugby World Cup.

Now lead by former Russia coach, Kingsley Jones, Barkwill is full of praise for his international coach, “We tried with [Mark] Anscombe, but with Kingsley coming in, it’s just a different voice. A different way of looking at things. A different challenge.

"Should Canada make it to Japan next year Barkwill will be a month past his 39th birthday and in line to become the second oldest player in the tournament’s history behind Uruguayan legend Diego Ormaechea." Great stat! ?? #RWC2019 https://t.co/m1YOSHvYxQ

“He’s trying to change nothing towards our culture, just the we way that we look at the game and how we play it. He empowers players and he’s been a breath of fresh air,” added Barkwill.

Barkwill played at his first World Cup in 2015, receiving a standing ovation for his performance against Ireland in Canada’s first game of the tournament. As a result, Barkwill is keen to create more memories on rugby’s biggest stage.

“That’s what we share most amongst the younger guys; how important it is to be there and sharing those stories. There’s a reason we should be a top 15 side in the world and we should be at World Cups. When we get it right, we play a brand of rugby that’s exciting and is not sub-par by any means.”

Barkwill enjoyed a title winning season over in America’s Major League Rugby competition. Playing for the Seattle Seawolves in the maiden MLR campaign, the Canadian had never even been to Seattle before meeting with the club and seeing where he would fit in as a player.

He said: “I spoke to the coaches at the other teams to see where I fit in as I wanted to be able to share and put in. I also looked at the group of guys Seattle wanted to put together and I knew a number of them.

“I’d played against and with a few, so I looked at that and knew the culture was going to be strong.” continued Barkwill. “You hear a lot about culture in sport, particularly in rugby and it’s something I’m pretty keen to drive within our team and any team I play for.”

It wasn’t always plain sailing at Seattle. Fellow Canadian Tony Healy was supposed to take the reigns at the club, but was dismissed following a failure to get a visa. Whilst not the perfect start for the Seawolves, this became a unique opportunity for Canada captain Phil Mack to take on Head Coach responsibilities.

“Before the Head Coach even got moved, he (Phil) would be an assistant coach, so when the coach moved on, Phil spoke up as the leader he is,” said Barkwill. “If you look at that roster, we have eight guys that are well experienced. Myself, Shalom Suniula, Olive Kilifi and Tim Metcher who had played in Super Rugby all sat down Phil said; ‘I’m going to work on this.’

“Phil is the one who has to stand in front, cutting the roster down for game day and selecting starting line-ups. We put a brand of rugby together that we knew would suit us and give us a winning formula.

“Phil did a great job, but if we’re losing then everybody is looking at him, but he does get the accolades when things are going well. It was risky, but he did well.”

Seattle wasn’t Barkwill’s first taste of professional club rugby in the USA. The 38-year-old played for the Sacramento Express in the only season of the ill-fated PRO Rugby franchise but had also played in Super Rugby with Western Force.

“When I had my opportunity in Western Australia, getting the opportunity there, it was really easy to sit there and just focus on your rugby. So, for me to walk in and to be a sponge, learning as much as I can and do anything it takes to get out on the field.”

It was performances for the Force that brought Barkwill to the attention of the Canadian selectors, winning his first caps in 2012. Moving back to Canada in 2012 to represent the Ontario Blues, the hooker was in Australia to do a Masters in education.

“I got it within my first year and taught whilst I was playing rugby. I had a great opportunity to keep playing rugby with the Force,” said Barkwill. “Their schedule was actually really easy and my schedule for teaching was really easy too.”

Capable of teaching science, geography, biology and physical education, Barkwill is keen to go into coaching when he hangs up his boots. “I’ve been a teacher for, nine, 10 years now and they kind of go hand-in-hand.

“If you look at the top 10-12 countries in world rugby, I think seven or eight of the coaches are actually teachers, so there’s obviously a correlation. I’ve been working on it a lot behind the scenes, doing clinic, one-on-one coaching within universities to showcase what I can do. Definitely something you could see me doing in the near future.”