John Moonlight: 'Guys are going to realise that it takes a lot to be a professional.' 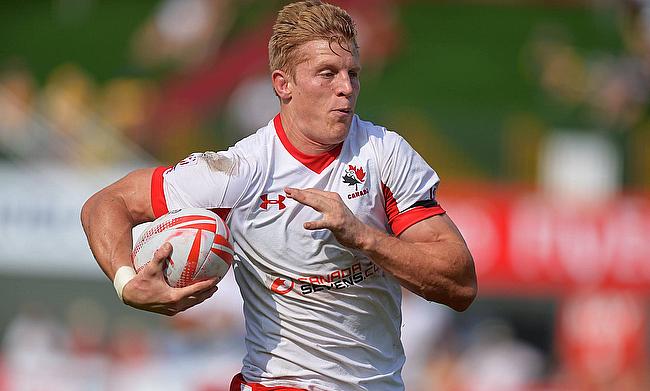 'We're looking to be the that factory of the Canadian national team' - Aaron Carpenter on the Toronto Arrows
From Aberdeen to Houston - How Kieran Farmer is enjoying life in the States
Boston the perfect fit for Leader as his MLR journey continues
Arnald: The project of establishing this rugby team in New York is very exciting

In April, John Moonlight announced his retirement from rugby.

Then aged 30, Moonlight was returning home to take up a position as a firefighter in his native Pickering, Ontario, following in the footsteps of his uncle and cousin, who served in Toronto.

Retiring just after Canada’s Commonwealth Games campaign, Moonlight says that firefighting was perfect post-playing career for him: “You go into another team atmosphere, when it comes down to calls, you are all working together for a common goal. That is something that really drew me to it.

"It was just the fact that I was giving back to everyone in Canada, especially as I’m working in my hometown," said Moonlight, on his journey home following a 24-hour shift.

Now returning to professional rugby to play for the Toronto Arrows in their inaugural MLR campaign, Moonlight admits that juggling his two professions will be difficult, but that Toronto have been more than accommodating: “It’s good having management that understands that you need to have a career outside of rugby.

"Moonlight is one of three new players who have yet to wear a #TorontoArrows jersey."

“The way it is in Canada, you can’t really play rugby to make a living for the rest of your life. You have to do something else afterward. Toronto have been awesome, super supportive of me and giving me the opportunity to do both.”

No stranger to 15-a-side rugby, Moonlight represented his country at the 2015 Rugby World Cup, as well as taking part in 15s all through his formative years as a rugby player: “After the 2015 World Cup, I was stoked to try and go to the 2016 Olympics and my whole focus went into that. Obviously, we missed out on qualification. Then, I started looking four years ahead, but real life came knocking and you have to make sure there is money in the bank.

“There is certainly some 15s left to play for me. I miss being out there, competing and playing, so this is the perfect opportunity for me. I think that I bring a lot of leadership to a new program, a new team. I have been in a professional environment with the Sevens for the past 10 years, so I hope I can help them develop and be the best possible team it can be.”

Despite being on the Sevens Series as MLR was starting to come out of its shell, Moonlight paid attention to North America’s latest attempt. One of his former Canada Sevens teammates, Phil Mack, would lead the Seattle Seawolves to the league title, despite coaching issues at the start of the season. Like many others, Moonlight was impressed by what he saw.

“There’s lots of raw talent out there, lots of great athletes who are just learning the game," said a passionate Moonlight. The majority of these American guys haven’t played a lot of high-level rugby, but you saw as the season progressed, they got better. It is becoming a legitimate league.”

Toronto have announced a strong squad for the upcoming season, a mixture of experienced international players and young players who will be having a taste of elite rugby for the first time in their fledgling careers: “Guys are coming from university programs, where you are playing for three months of the year and the rest of the time is just, kind of, partying!

“We’re now into a situation that it is a full-time, dedicated program where you have to be ready to perform every weekend. A lot of guys are going to realise that it takes a lot to be a professional. I think we have a great group of players, we announced some really strong guys and we have got a great coaching staff.”

Due to the adverse weather conditions in Toronto, the Arrows will be playing their first eight MLR games on the road, travelling to each of their league opponents before playing eight consecutive home games. Having played on the Sevens Series for nearly 10 years, continuous travel is something that Moonlight had to adjust to quickly.

“It’s taxing, it’s hard. You’re in hotels, carrying luggage four days a week. We have to make sure that the guys are fit and ready before the season starts, because when you add the travel, it can be tough on the body, " said Moonlight.

More personally, Moonlight is hoping to add his experience to the Arrows forward pack and the former Sevens mainstay will be lining up in the backrow alongside Canadian international Lucas Rumball and England U20 star Jack Nay. Furthermore, Moonlight is looking to the development of the players who will be experiencing professional rugby for the first time.

“I want to make sure that the young guys know what it takes to be successful and hopefully I can help them get to that level where they can be international players and stars. I’ve been there, I’ve had the chances to do some great things, if I can help these guys and give them a few tips and information to get to that level, that would be great.”

When asked about what else Moonlight would like to achieve this season, the answer was simple and light-hearted: “I want to win the Championship. Obviously.”

The Toronto Arrows start their season in New Orleans on Saturday 26th January at NOLA Gold. To learn more about the Arrows, visit their website. https://torontoarrows.com/