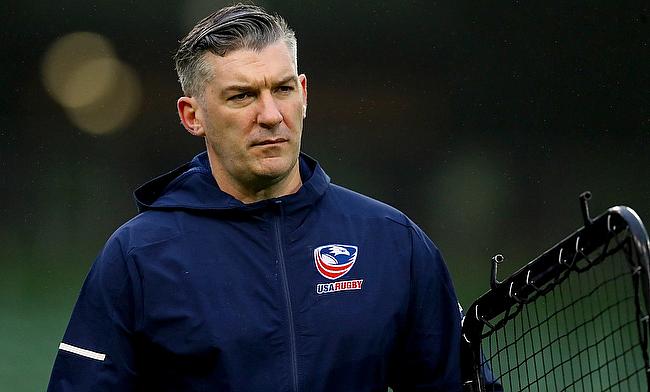 Greg McWilliams believes Major League Rugby will have a positive impact on the MLR
©Inpho Photography.

USA 7s are leading the way, but Olympics still number one target
Stanford: MLR and US rugby heading in one direction
Major League Rugby has the ability to go far - Hewitt
'I think the American sporting population will be captivated by the World Cup' - Friday

It is still over two months until the Rugby World Cup kicks off in Japan, but the USA national team are already in camp gearing up for the Pacific Nations Cup where the side will play Japan, Samoa and the old enemy, Canada.

In September, the Eagles will be hoping to shine on the world stage as rugby in America continues to grow and USA attack and backs coach Greg McWilliams knows how important this preparation time is.

“Everything we do is towards the Rugby World Cup. We play England first, and we have France, Argentina and Tonga,” said McWilliams.

“It’s an incredibly difficult group and we must use that time that we have together to prepare for that.”

Currently based at the Air Force Academy in Colorado, McWilliams splits his time with the senior national side with coaching Yale University’s rugby side that competes in the Ivy League.

Now with Major League Rugby available to his players, McWilliams still believes it will take time until there is a large influx of players playing rugby at a collegiate level, but he does feel there is now a platform to build on moving forward.

“I think the changes that we’ll see will be a couple years down the line. In terms of the standard that the MLR teams are playing at, we are seeing a better rugby player being produced,” McWilliams said.

“I think the key to the United States is really going to be the youth and how we can have that procession of rugby players coming through from U8s, U9s, through to high school into academies.

“It’s a great start and players are coming in fitter. They’ve had more touches (contact) with the coaching staff and their understanding is improving but for us to really hit the potential, it’s about getting people playing from a younger age and developing.”

“We find ourselves in the collegiate game coaching a lot of players that have never played the game before who are crossover athletes. So, the younger we can get our players in America, by far the better it will be for us as a coaching group and as a country.”

With a flooded sports market in America, in which American Football remains at the top of the tree, McWilliams is under no illusion that it will be a difficult task to dethrone the multi-million dollar business that has dominated the country for so long.

“When you’re trying to recruit or look at a young guy to become a rugby player, you are competing against a lot of contact sports and American Football pretty much gobbles up the really good athletes because there is the ability to make an awful lot of money and get scholarships,” McWilliams said.

“Rugby in the USA isn’t a varsity sport at a lot of colleges, so they are still not in the position to offer scholarships. Even for an average college, it is costing them around 40 to 50 thousand dollars a year, so it is a decision that you make as a family.

“If you’re an 11-year-old playing rugby and American Football, and you’ve got the ability to maybe save yourself $200,000 by getting a scholarship, people are going to try and aim for that scholarship. That’s why we’ve got a lot of people who mightn’t play rugby in high school because of that reason.”

Having been in the USA since 2014 as the Head Coach of Yale, McWilliams was appointed as an assistant coach for the national team in 2017. Now working alongside Gary Gold, McWilliams revealed that the coaching staff are based all over the world.

A long tour has come to an end. Been such a pleasure to spend it with this great group. @usarugby #arcchamps

“We only come in very rarely throughout the year because of the expense of bringing everybody in,” McWilliams continued.

“So when we come together, it is the equivalent of a coach being in England, a coach being in Poland, somebody in Italy, one in Denmark and one in Portugal. It’s such a long distance to get together and see players and our goal is to do as much work as we can remotely with the players, which Gary does brilliantly.”

The Irishman, who started his career as a teacher at St Michael’s College in Donnybrook, says that the popularity of rugby is no doubt changing: “The landscape is generally changing in America as a result of MLR. It’s being broadcast on national TV stations, which is huge.

“I’ve been with the Eagles in my role and our job is to try and put our best foot forward, because Americans love winning. If we can develop a team that is doing its best to win and being competitive, that’s going to drive that support.

“American people need to see success. If they see success, they tend to support it because they like it. That’s obviously what our goal is, to try and reach the standard of how we can compete at the national level and try to inspire the next generation of players.”