USA 7s are leading the way, but Olympics still number one target 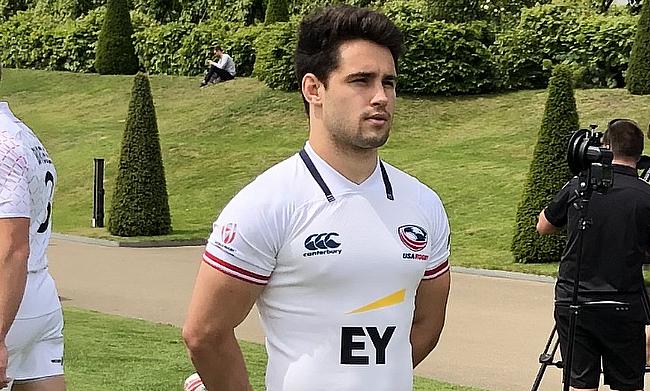 Jones: ‘London 7s can help us build towards Olympic qualifiers’
We haven’t been as successful as we wanted to be - Burgess
England Sevens' James Rodwell to quit professional rugby at end of season
USA have to be the ‘hungry man’ ahead of Las Vegas return

Just over a month ago, South Africa mounted a quite remarkable comeback to defeat Fiji in the final of the Singapore 7s and while the Blitzboks and the Olympic champions gained the headlines during and after the tournament, it can be argued the USA have been the story of the season.

Throughout the whole of the campaign, which began in Dubai back in November, USA have continued to overperform and break new boundaries. For Mike Friday’s side, qualification for the 2016 Olympic Games in Rio was a major step for this small rugby nation and the same end goal has never wavered.

Even now, as they sit at the summit of the HSBC World Sevens Series with just two tournaments remaining, their main focus is on being at Tokyo 2020. Since Brazil three years ago, the Eagles have not rested on their laurels. Their hard work has continued and this talented group of players have produced some impressive rugby.

Phil Greening has to take a significant amount of credit for the USA’s development since he became the performance coach for the Eagles in 2014. The former England international, alongside Mike Friday, has engineered the journey USA are currently on and they have defied the odds to make this historic sporting nation one of the top Sevens sides in the world. Staff and players alike are moulding an identity for the USA and rather than being the plucky underdogs, they are now a serious force.

“It’s been such a good season,” Greening said. “To be honest, qualifying for the Olympics has always been our mantra and it still is. Of course, we’re top of the series at the moment but we’re taking one hurdle at a time and we want to keep developing. We’ve not looked beyond. It’s about taking things task by task.”

It’s @USARugby top of the standings heading into the #London7s@Olympics qualification is within touching distance.

To take things ‘task by task’ may have been a tough mentality for the USA to follow at the start of the season. If you rewind to Sydney at the beginning of February, the Eagles had lost a fourth consecutive final. “Always the bridesmaids never the brides” is how Friday described it, but the feeling of having to settle for second best didn’t last for much longer. Their focused and determined attitude was on show in Las Vegas and on home turf, the Eagles secured their first series title of the campaign after five rounds.

Four silver medals and one gold is a major reason why the USA find themselves edging towards another Olympic Games and potentially, a World Series championship.

“The Olympics is huge and it always has been in the five years I have been working in the USA,” added Greening. “Yes, we love it in England when it is on, but when it’s finished, it never gets talked about. In the US, it is always massive. If you are an Olympian, you have really made something of yourself and the importance of being at a Games is something which myself and Mike recognised as soon as we arrived. It continues to develop the game and that is key.”

An integral part of the Eagles’ progress has been Madison Hughes. He was named captain by Friday back in 2014 so it was unsurprising to hear him echo Greening’s views regarding the USA’s aims ahead of the London 7s.

“Qualifying for the Olympics is the biggest goal, but we’re here sitting as number one with two legs to go”, Hughes told TRU. “It’s there and we are going to look to do as well as we can and we’ll look to defend our position, but Olympic qualification is the biggest thing because we know how much it means to our programme and how much it means to the United States rugby community.”

Las Vegas trophy is strapped in ready for its journey back to San Diego. @USARugby pic.twitter.com/R1r7DEC9ai

The Eagles' second victory in Vegas in as many years would have enhanced the profile of the Sevens game in America even further and for Hughes, it was also a personal highlight. “I missed five months of the season with injury last year so I did miss out on winning in Vegas in 2018," he said. “I was so proud of the guys because it was such an awesome moment. There was a part of me which was really hurting because I was not out there with them so to come back this year and win again made it a special weekend for us and the whole team.”

Hughes was present when USA won their first ever series title in London back in 2015 so for both the captain and Greening, Twickenham holds great memories as they make their return this weekend.

“Twickenham is always a special place,” said Greening who represented England 24 times between 1996 and 2001. “I have great memories with not just England, but with Wasps when we won the Premiership and it is just iconic not only for me, but for all of the teams. This weekend with London 7s is always great and for a small rugby nation like us, it is massive to be keep performing on these stages.”

USA head into this weekend three points clear of Fiji following a small dip in form since their Vegas triumph. The Eagles have managed just one podium in that period, a third-place finish in Hong Kong, whilst Fiji have medalled in their last three tournaments.

USA have been drawn alongside Australia, Wales and Spain in Pool D for this weekend and despite Fiji breathing down their necks, Hughes admits, as the series leaders, they are in control of their own fate.

Hughes said: “We know there are so many good teams on the circuit. The Fijians have been fantastic as have New Zealand, England and all of the other sides so it makes you have to perform very well. We can’t really count on what other teams are going to do and we can only think about what we’re trying to do and that is performing as well as we can in each game.”

A strong display at Twickenham could see the Eagles take another step towards an historic World Series championship and they could also confirm a place in the 2020 Olympic Games if results go their way.

The next eight days could be the perfect conclusion to the latest chapter in the USA’s story.