Jones: ‘London 7s can help us build towards Olympic qualifiers’ 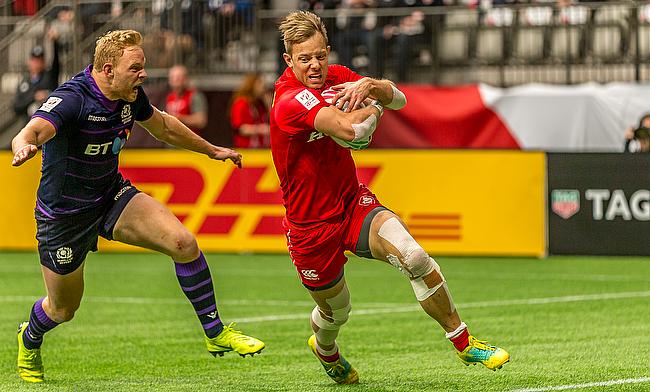 It was a warm day in London, and stood just meters away from Kensington Palace, Jones spoke calmly and comfortably about his nation’s objectives in the coming weeks, with qualifying for the 2020 Tokyo Olympics firmly on the 29-year-olds mind.

“At the start of the year, the plan was to go top four and get that Olympic qualification out of the way as soon as possible, because there are so many good teams when you get into your qualifier tournaments in each region,” said Jones.

“You don’t want to be in that repechage at the end of the year as well. That’s just a few months before the Olympics. With all these up and coming teams right now, it makes it so much more difficult to get there. We’re prepping for a Cayman Islands tournament to qualify and we’re looking to build this weekend towards that.”

Taking place in the first week of July, the Rugby Americas North Sevens 2020 Olympic Qualifier will decide which sides outside the top four of the World Series qualify for the Olympic Games in Japan.

Currently placed 12th in the World Series, Canada had a difficult start to the season. Missing the majority of their preseason due to a contractual dispute with Rugby Canada, they have also parted ways with popular Head Coach Damien McGrath just prior to the London leg of the HSBC World Sevens Series.

A farewell night with the boys! Debs and I had a great BBQ with the whole squad last night. Thanks to Luke McCloskey’s parents for hosting. Very difficult to say goodbye to these wonderful… https://t.co/9QuiobGy5V

“Obviously the boys are gutted and it’s something that we can’t control,” Jones continued. “At the end of the day, we have to do a job this weekend. The boys will definitely be playing for Debs (Deborah McGrath) and Damo (Damien McGrath) this weekend.

Jones also believes that Canada could be in a stronger position if the side had finished off games better in previous legs of the competition: “We were so close to getting three, four, or even five top eights. Just with finishing games off, just the close ones that we’ve got a little bit unlucky.

“Our season could definitely have been a bit different. We could have easily been in that top 10 if things had just gone a bit differently. At the same time, that is sevens, the bounce of the ball will change things. I think that we have been trending in the right direction.”

“Since the start of the year we’ve been getting better, the defensive work has been quite good. I really do think that the pieces are starting to come together. It’s tough because of the quick turnarounds in the tournament this weekend.”

A regular feature on the Series, Jones himself has been representing Canada since 2008 and the team has plenty of experience in their side.

Nathan Hirayama, Justin Douglas and Adam Zaruba are also well-known faces, Zaruba scoring perhaps the most iconic try of the series, rising above Welsh captain Luke Treharne to take the ball with one hand, before dotting down at the end of it all. '

Loads of hard work by our Men's 7s ahead of this weekends #London7s! Stream it LIVE on https://t.co/oFcjMRZsD1 & get in-game updates at https://t.co/HSl39lMqdQ ???? #RC7s

“This week I’ve got the captaincy, Natey (Nathan Hirayama) and I bounce it back and forth, but there are so many other boys that could step up, be in that leadership role and already do lead within the team as well,” Jones said.

Taking the third spot in Pool A this weekend in London, Jones’ Canada are also joined by South Africa, Argentina and Japan. With two of the sides placed above Canada in the overall standings, Jones says that no game is an easy one.

“I’ve said this so many times, every pool nowadays is so, so tough. Argentina up first is a massive game for us. South Africa are on form as well and Japan, well they’ve been playing some good rugby and they’re also in that relegation battle, so they’re going to be turned up for that game.

“They’re all going to be tough games, they always are. It’s just the mental side of things. Making sure that we’re switched on. For us, it’s to build towards our Olympic qualifiers, but for other teams it’s avoiding relegation or getting their Olympic qualification.”

London marks the penultimate leg of what has been a gruelling campaign for many of the players, but Jones says that playing in the capital is one of the highlights of the year: “The boys love coming here. There are always some great sights to walk around and check out on our days off.”

“The tournament itself, playing at Twickenham, it’s such an iconic stadium and it’s hard not to get up for games like that. We’ve got to try and keep the bodies in good nick and keep building towards our Olympic qualifier. Just make sure that we have all the simple stuff that we’re working on set up and let the rest take care of itself.”