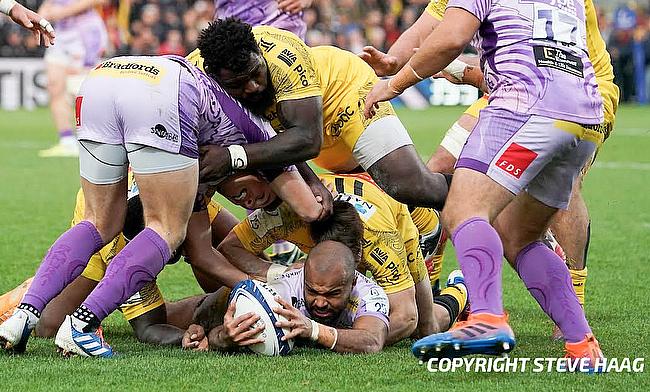 According to Rob Baxter, he said Tom O’Flaherty was a player with “bags of potential.”

Two-and-a-half-years after moving to Exeter Chiefs, the flying winger has been able to prove his Director of Rugby right by showcasing his immense talent on the biggest stage. His Gallagher Premiership Player of the Month accolade for November was just reward for the journey the 25-year-old has been on and the numerous blistering tries he has scored speak for themselves.

O’Flaherty admits this is the most comfortable he has been in rugby, and by that he means settling in one location for a period of time, rather than travelling between different countries to help shape his career.

Time spent in Wales and France experiencing the university lifestyle, as well as rugby abroad, aided his development as a player but despite it not being a straightforward road to one of Europe’s leading clubs, O’Flaherty has always taken each step with a smile on his face.

“I have enjoyed it to be on honest which I think is the main thing,” O’Flaherty tells TRU. “I didn’t go into an academy set-up straight out of school [Dulwich College] or anything like that. I went travelling for a year straight after school. I did play for Blackheath for a little bit before that but after travelling, I went to Cardiff Uni. I had a good time there and in my second year, I started playing for Bridgend.

?? Tom O'Flaherty ?? for his solo stunner, carving Wasps open and displaying how balanced a runner he is when given even an inch of space ????

“Through there, I got picked up by the Ospreys. I then went to France to do my year abroad for my degree. I had a good time out there playing for the Montpellier Espoirs, which is basically like A-League for Montpellier, and I managed to balance that alongside studying and having a good time. I then finally finished my degree a year after that back in Cardiff. It is good to enjoy these things whilst you’re doing them and that is what I have done with my rugby.”

During his time in Wales, O’Flaherty is astutely aware his rugby development went up a notch. The level of physicality increased and he was a great beneficiary of plying his trade for Bridgend as it prepared the winger for what was to come further down the line.

Added to this, he was able to hone his skills on the amateur sevens circuit with sides such as Red Panda whilst also raising his own profile in the sport.

“The Welsh Premiership was quite a physical league at times and obviously as a youngster, I suppose it just toughens you up,” O’Flaherty explains. “You learn to become more physical and fill out and at the Ospreys, being in that environment taught me a few good lessons as well.

“With sevens, I loved it! Red Panda was great fun and I played for them at Bournemouth 7s. Sevens actually probably played quite a big role for me in terms of progressing in rugby and the exposure it can have, but that social side and having a laugh was also key for development. I think it is a culmination of things and experiences that have led to me being at Exeter.”

O’Flaherty’s journey to Devon is certainly unique, but there are elements of his experiences which he is able to see in other Chiefs players. England U20 international Rus Tuima is balancing his duties between Exeter and National League club Plymouth Albion whilst Scotland’s Sam Skinner is one of the more recent players to enter the professional set-up from the now flourishing BUCS university pathway.

Having been around the university environment at Cardiff and tasted National League rugby himself with Blackheath, O’Flaherty is aware of the impact the lower levels of rugby can have on a players’ development.

“I think it is massively important,” he explains. “As an 18/19-year-old, I think the step from boy’s rugby to men’s rugby is more of a physical thing than anything else. If you get used to that early on, I think it is a really good learning curve and also having to deal with a different environment, which the boys who are out on loan will know, can be beneficial. One minute you’re in the Chiefs professional environment and the next you’re in a semi-professional environment. I think it helps make you a more rounded person.”

The consequence of O’Flaherty’s experiences saw him earn a move to Exeter from Ospreys and last season, the winger really did shine at Sandy Park. The 25-year-old has certainly played his part in the continuous progression of the club with 12 tries in 34 games and he believes the emphasis on creating a positive environment is the key to driving the team on.

“That feeling amongst the team is one of the great things about the club,” says O’Flaherty. There isn’t really any hierarchies. Everyone just mucks in together. When I first arrived, one of the things which I noticed straight away was that everyone just has a good bond.

“It is, of course, a very good environment to learn in when you are working with top coaches and world class players day in, day out. They are one of the top clubs in Europe.

“The nice thing about the environment is that the club let you enjoy yourselves. The club let you express yourself which helps you bond with teammates which I think is massively important because if you can enjoy yourself and you are playing with people who are genuinely your mates, then it is obviously going to translate on to the pitch.”

It could well be the ‘togetherness’ factor which has helped Exeter maintain their status as one of the leading clubs in England and after a couple of frustrating years on the continent, the Chiefs are now starting to enjoy themselves in Europe too.

It is almost a year to the day since O’Flaherty scored his first European try for Exeter and the winger also dotted down in both of this season’s opening Champions Cup Pool 2 matches against La Rochelle and Glasgow Warriors.

A hamstring injury he sustained in his dazzling performance against Wasps at the end of November means O’Flaherty is likely to miss their final two European matches with the Chiefs travelling to Glasgow on Saturday before concluding the group stage against La Rochelle.

Exeter are within touching distance of the quarter-finals following four wins from four and with Rob Baxter’s side also sitting at the summit of the Gallagher Premiership table, their pedigree is there for all to see, but O’Flaherty knows this is just the beginning for the Chiefs this season.

“The job is far from done,” he insists. “We are in a good position in our pool and there is still a lot more to do, but at this stage, we can’t have many complaints, right?! Top of our group in Europe and top of the Premiership!

“However, you can never really rest in any competition so we have just got to keep moving forward. Obviously, you want to go all the way in any competition, but it is how you get there. You obviously have to get there by taking one game at a time!”