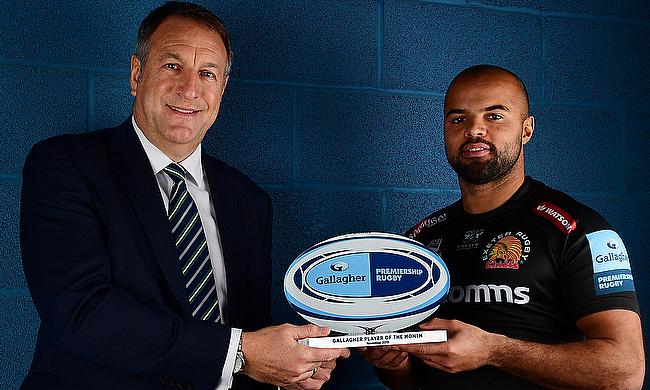 The flying wing was pivotal in a crucial month for the Chiefs as they emerged from the end of November third in Gallagher Premiership Rugby. O’Flaherty has beaten more defenders this season (30) than any other player in the League, gaining 363 metres for his club and making an impressive nine clean breaks.

O’Flaherty’s performances in November were acclaimed by Ugo Monye, the former England and Lions wing who is now a BT Sport pundit, covering Gallagher Premiership Rugby, and Gallagher brand ambassador.

Monye said: "I think Tom’s been outstanding, absolutely class – in November there was a huge amount of competition with so many players performing so well at the top of the table.

"Tom’s been synonymous with Exeter’s consistent performances – his contributions in terms of his try-scoring, assisting as well as defensively have been outstanding."

O’Flaherty was presented with his award by Geoff Gale, head of office for Gallagher in Exeter, where the local insurance broker has a 60-strong team as part of a UK-wide network of more than 70 branches.

Monye added: "Every top-class winger needs searing pace and he’s got that in abundance – it feels like whenever he’s broken the line he brings that real sense of excitement both on the pitch and in the stands.

"His work-rate off the ball has also been important, and that’s no surprise at all as that’s obviously one of Exeter’s fundamentals and pillars of how they play.

"The way he works off his wing and creates opportunities is brilliant, and we saw a really fine example of that at the weekend with his try against Wasps, coming off the wing and through the middle – he was almost untouchable.

"Tom scored some magnificent tries at the end of last season, particularly at Sandy Park, so he’s really just carried on from where he left off."

Geoff Gale said: "It’s an absolute honour to present the Player of the Month award to Tom O’Flaherty, whose brilliance on the pitch has had such a powerful and positive impact on the team’s overall performance. The Exeter Chiefs are a huge source of local pride for rugby fans and community-focused businesses like ours, and we’re behind them every step of the way as they compete and challenge for the Gallagher Premiership Rugby title."

O’Flaherty – as part of his prize for being named Gallagher Premiership Rugby Player of the Month – wins an Exeter Chiefs shirt signed by the whole squad and framed by Gallagher to be gifted to a local club, school, community group or charity of his choice.

Since it became the proud title partner of Premiership Rugby in 2018, local insurance broker Gallagher has embarked on a series of community initiatives that champion the positive contribution of grassroots rugby — the lifeblood of the professional and elite game — as part of its ongoing commitment to supporting the wider rugby community and its values.

O’Flaherty was judged by a panel of experts as the player who made the biggest impact in Gallagher Premiership Rugby over the month of November 2019.