Red Panda Women’s 7s: International stars and a team on the rise 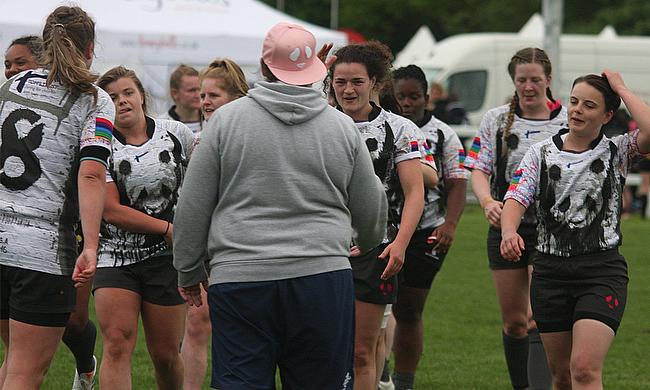 Her side won the Rugby4Heroes competition last summer and they also performed well in other tournaments, such as the Heart of Wales 7s, in a landmark first year.

The team was formed by Veal after getting in touch with Red Panda Men’s coach Rob Jones, as well as manager Max Ashcroft, whose own side have been successful on the Elite Sevens circuit for a number of years.

“We were really pleased with our last season went,” said Veal. “It was kind of an unknown thing. It was something that was put together very last minute! We had no idea who we were going to get.

“We did have a group of players who approached me and they wanted to form a team. They asked about doing a Sevens team in the summer and I said ‘we can do, but I don’t know much about Sevens but I am happy to help!’

“I then approached Rob Jones after it. He was running Red Panda’s Men’s team and I just wondered if they wanted a Women’s team. Rob and the rest of Red Panda just snapped my hand off.”

RP7s’ Men’s side usually consists of players who currently ply their trade in the National Leagues or at University level with both Jones and Ashcroft involved heavily at both levels of the game.

For Veal, her approach to recruitment has continually progressed. The side currently have mix of local players from the North-West of England, Tyrells Premier 15s athletes as well as a sprinkling of internationals from across the home nations.

She added: “I spoke to a handful of key members from last year and asked if they wanted to be involved again this year. That was a very instant ‘yes’!

“It was about getting those players involved and then we sent them off to find more players who would be interested.

“There is a contingency from Firwood Waterloo who are a Tyrrells Premier 15s team and there are a few from some other places like Loughborough. We have a couple from Sale FC’s 1861 side and there is the potential of a few others from clubs like Darlington Mowden Park. It’s positive.

“Also, all of the internationals from last year have joined up again and hopefully we should be able to pick up one or two others.

“We’ve got Lauren Delany from Ireland and we may have another Irish Sevens player too. We have got a Scotland Sevens and 15s player involved from last year. Wales and England are also represented with the likes of Hannah Thornhill featuring for us in the past.”

With a strong group of international players pencilled in to represent RP7s Women’s for the 2019 season, it came as no surprise to hear Veal express her appreciation following the news regarding full-time contracts within the women’s game in England. by the RFU with an additional seven players handed elite player squad agreements.

At the start of January, 28 women's players were awarded full-time contracts by the RFU with an additional seven players handed elite player squad agreements.

The positivity and expectation surrounding the England Women’s side heading into the Six Nations, which begins this weekend, has heighten following the announcement and Veal hopes it can have an encouraging impact across the Women’s game.

“If we are wanting this sport to grow where it could go to, then players are going to have to be given the time to improve their skills to become the best they can be,” said Veal.

“That’s where those contracts come in and hopefully, it’s not just case that England are just going to do full-time contracts. Hopefully there is a point where Ireland have got full-time contracts and the same from Scotland and Wales. It just generates a lot more competition between how home nations which can only be positive.

“There are girls already who, whether they are at university or U18s teams etc, will have the goal of gaining a full-time contract in the back of their heads. They will know if they want to be a full-time England player, they will have to take their rugby seriously. They will put in the effort in terms of what their next steps will be to determine their pathway until they get to international standard.”