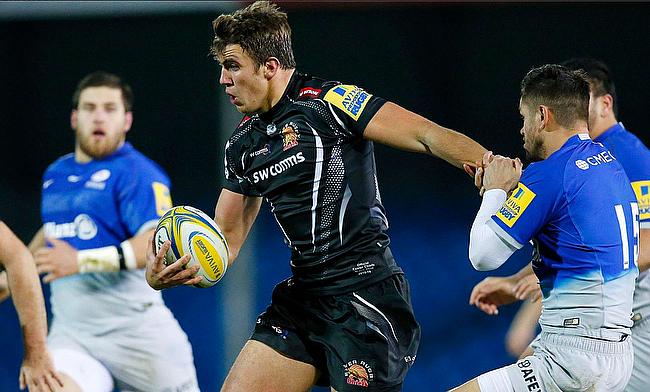 Matt Beesley: “I needed to ask Northampton if they were sure about signing me as I didn’t believe them!”
Ollie Thorley: “I feel lucky to have played for my country”
Ben Christie: Crossing the boarder

Exeter Chiefs' Sam Skinner talks to TRU about his life changing decision which kick-started his rugby career and leading his university to BUCS glory.

Sam Skinner is proof that when an opportunity arises, you should grab it with both hands.

For many young  English rugby players whose typical dreams are of representing their country at Twickenham or playing in the World Cup, life at Taunton Titians may have seemed like a step back rather than a step forwards.

Having left school in 2013, Skinner was at a crossroads. Where would his life take him next? On his agenda was travelling on a gap year and it looked for all the world like he would jump on a plane and begin his adventure.

However, what came next for the now 21 year-old was a journey of a completely different kind.

“I finished Torquay Grammar when I was 18 and had planned to travel and go to university after that,” he said. “However, I went to Taunton for their pre-season just to play a bit of rugby and see if I could hack the standard. I got opportunities in pre-season friendlies and after impressing for Taunton, I eventually got signed by Exeter Chiefs which was all fairly fortuities! They said if you sign for us you can go to Exeter University and you can play rugby there as well which I was more than happy with!”

For some young players, they do unfortunatley fall at an early hurdle when trying to break down the barriers to make it professionally, but for Skinner, the hurdle of playing at National Two South level with Taunton presented itself to him and he cleared it without any problems.

Instead of visiting some of the most exciting places on earth and creating new memories to last a lifetime, Skinner was about to turn his dream into a reality as he went from playing in the fourth tier of English rugby to being involved with an Aviva Premiership club.

But, it wasn’t all straight forward for Skinner after he had dotted the i’s and crossed the t’s at Sandy Park.

After a few training sessions with Chiefs, the club noticed that Skinner had patellar tendonitis in his left knee which didn’t prevent him from playing, but the club were keen manage that injury and also get the forward in the right shape to compete at the right level.

It meant that Skinner had to take time out of rugby meaning he didn’t play for the majority of his first year with the club, but now it looks as though it was another key decision in his life which has paid off.

“Coming straight into the academy was always going to be tough,” adds Skinner. The club then spotted the tendonitis in my knee and it meant be taking time out of the game. I basically had to work hard to recover from this and also get myself in the right shape physically as quickly as I could and I managed to achieve that and was ready to go for the 2014/15 season.”

From there, Skinner seemingly hasn’t looked back. He made his first team debut for the Chiefs in the LV=Cup against Gloucester early last season before finishing the campaign with his first appearance in the Premiership against Northampton as well as representing England at the Junior World Cup.

“It was brilliant to make by debut at Sandy Park against Gloucester, Skinner says. “Coming from Exeter, it was a dream come to true in a way and then I followed that with a five minute appearance in the Premiership against Northampton.

“I was privileged to play for England last year in both the Six Nations and the Junior World Cup as well. To represent your country is such an honour and it makes the people that have helped you along the way proud of what you have achieved and that was a really big milestone for me.”

Considering Skinner had never played for England at any level before his time with the Under 20s once again highlights the talent that this young and exciting player has. He admits at 21 years-old, that playing for his country again is a long way off, but having said that, playing at Twickenham is something that Skinner has already ticked off his list.

With there being no LV=Cup this season, Skinner – who is in his second year at Exeter University studying Business Studies – knew that there would be limited opportunities to represent Chiefs’ first team in this term. He has featured for the Braves in the A League (where he has also captained the side) and made a return to Taunton for a few matches, but his game time has also been dedicated to the University.

“I knew it would be tough to break into the first-team set-up this season so my focus has been on impressing in by A League games and for the University,” Skinner says. “I played all but one game for the Uni this season and I thoroughly enjoyed that because I was playing at a really high standard.”

Skinner uses the phrase ‘thoroughly enjoyed’ which I think even he will admit is an understatement.

Despite him being in second-year, Skinner captained Exeter University this season where they went on to complete the campaign unbeaten and win the BUCS Championships against Loughborough at Twickenham last month.

“You couldn’t really make it up really,” adds Skinner. “There has been a lot of expectation on the University in the past and we didn’t really want to put any pressure on ourselves. I know it is very cliché, but we genuinely did take one game at a time this season.

“In terms of myself, I enjoyed the responsibility of being captain, but there was experience throughout the whole team. I would say the final few words before a game and be there for the toss of the coin, but it was key for me for everyone else to have a voice. That was the good thing about our team that it was full of leaders and it was just another factor in our great season.”

So with one piece of silverware under his belt, Skinner will no doubt be focusing on his progress with the Chiefs and the Braves. The Braves side recently booked themselves a place in the last four of this season’s A League while the Chiefs will be doing their upmost to secure a home semi-final in the Aviva Premiership with three rounds of the scheduled season to go.

For a player who started his career at Topsham RFC playing as a back, the transformation over the 16-year period since he first picked up a ball has been quite astounding. Next on his radar is that strong end to the season with the Braves and then an enjoyable summer before the new campaign and the hard work kicks off once again.